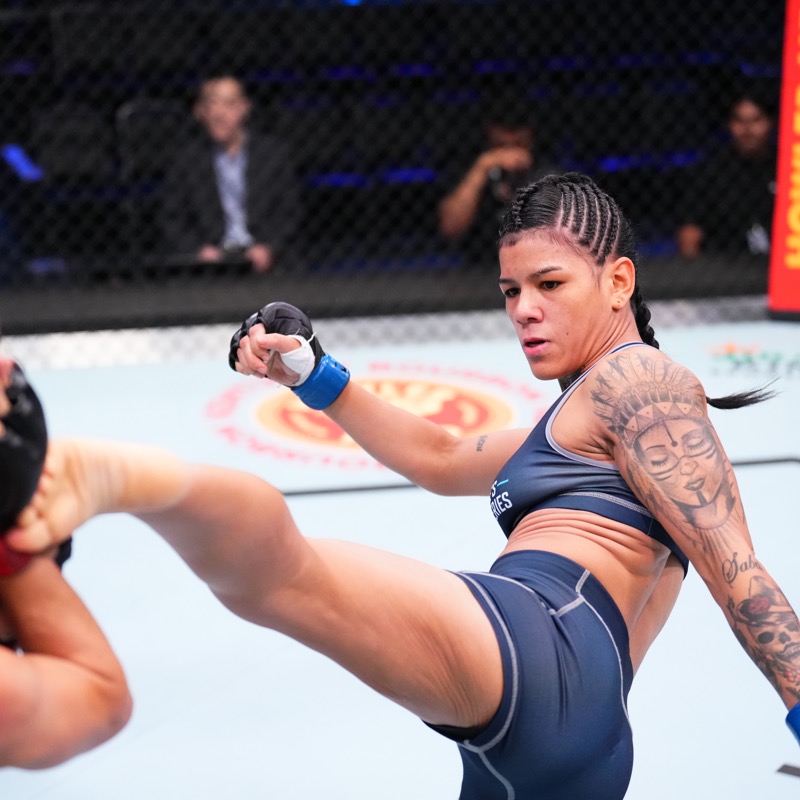 The underdogs reigned supreme on Dana White’s UFC Contender Series this week as FOUR of the five underdogs cashed in BIG with a contract. The night was opened by a sensational brawl between two fiery young Brazilians, with Denise Gomes taking the win. We had two submissions on the card with impressive finishes from both Jesus Aguilar and Michael Parkin. Darrius Flowers managed to grab one of the stranger win in the show’s history with his opponent tapping out after a minute from a shoulder injury.

The biggest story of the night though had to be Cameron Saaiman who became the youngest male fighter on the UFC roster with his incredible performance against a tough opponent. All the fights, along with the BLÜ’s Power Rankings for the night, are described below.

Amanda was the aggressive one early, landing a couple of combos, but the speed advantage for Gomes was pretty clear. For the majority of the round, Amanda was the one in clear control. It just seemed as though Gomes was struggling with her fight IQ, throwing some ill-advised techniques that gave Amanda the edge. Eventually Amanda used some of those openings to go for a takedown. She didn’t get it, but it led to some control along the fence. Thanks to her offence, it seemed like a clear round on the cards for Amanda.

Gomes really turned it up in the 2nd round, pushing the pace, but Amanda still seemed to be doing better in the exchanges. Just as it looked like maybe Gomes was going to start stealing the momentum, Amanda dragged Gomes down with a HUGE takedown. After that, finally Gomes started to feel herself by pressuring Amanda hard. This started to really slow Amanda down and she started to really get pieced up. The last couple minutes of the round were all Gomes, landing some huge combos. They both exploded the last 30 seconds of the round though, leading to a rare standing ovation from Dana.

With the round tied 1-1, it all came down to who could pressure harder in the final round. Gomes opened with the heavier pressure, but Amanda was still doing well to keep up. As the round went on though, Gomes’ offence started to be overwhelming, backing Amanda up and landing big shots. It slowed Amanda down but she definitely wasn’t out yet, giving everything she had, trying to stay in the fight and edge a decision. I thought it was a pretty clear 29-28 win for Gomes. Interestingly, the judges gave all three rounds to Gomes.

This was truly one of the best women’s fights I’ve ever had the pleasure of watching. Both women gave it literally everything they had, trying to get a finish. This could have been one of those situations where Dana gave out two contracts. There was no doubt that Gomes was getting a contract and that she’ll likely take a bite out of the UFC strawweight division. To put it in perspective, had this been in the UFC, she’d now be in 3rd place for most strikes in a single strawweight fight.

Cameron Saaiman def. Josh Wang-Kim by KO in the 3rd Round

Both guys started off a little slow, but there was a clear difference in styles. Wang-Kim was using his movement to throw Saaiman off a bit while Saaiman was throwing very quick, straight strikes. After doing well in the striking exchanges, Wang-Kim then went in for a takedown, pinning Saaiman into the fence. It was close, but it seemed like Wang-Kim was up 1-0.

After a round of striking, they went straight into the grappling in the 2nd Round with Wang-Kim grabbing the takedown. He was dominating on the ground along the fence, but quickly found himself in trouble as Saaiman locked in a guillotine. That led to them returning to the feet where Saaiman seemed to be the one pressuring harder. Wang-Kim seemed to really be struggling with the pace and pressure, losing a lot of his early movement. With 10 seconds left, it was Saaiman that grabbed a takedown. With all that pressure and pace, it seemed likely that the fight was tied 1-1.

Knowing the fight was tied up, Wang-Kim came in harder the final round, pressuring Saaiman. Sadly for him, that slowed down quite a bit as Saaiman was slamming HUGE leg kicks into him. After slowing him down with those kicks, Saaiman kept walking him down and landing crisp combos. They then got into a WILD exchange where Saaiman then landed a BOMB, knocking Wang-Kim out for a pretty clear contract.

It’s tough when a fighter is this young, especially with minimal experience, but there’s no doubt Saaiman has the skills and the work ethic to have an incredible future in the UFC.

Aguilar, in spite of his wildly short reach, was the one pressuring early with his striking, hitting Ferreira with some pretty big combos. Ferreira landed a HEAVY combo too, but Aguilar followed it up with a great takedown. Sadly for him, he ended up in a rough spot with Ferreira locking in a DEEP guillotine. He got out of it and got back to his feet, but made a mistake, leading to Ferreira landing on top of him.

Once again he got back up, but was stuck in another guillotine along the fence. From there, Ferreira moved the fight to the ground, really working hard for a submission. Aguilar managed to close out the round on top, but I’d have given Ferreira the round on the cards.

Both men opened the next round with a WILD exchange, seemingly BOTH landing huge shots in the exchange. They were both a bit wobbled, but Aguilar seemed to be worse off. Aguilar then went for another clinch along the fence, but was then dragged down once again. He managed to reverse him, finding himself on top of Ferreira. He used that position to move to Ferreira’s back and work for a submission. Ferreira reversed positions with about 10 seconds left in the round, but it seemed like a clear round for Aguilar, likely tying it 1-1.

Once again, they were both throwing HEAVY shots to open the round, but Aguilar clearly landed the heavier shots this time. He then transitioned to the ground, finding himself on top of Ferreira. From there he finally got his shot at a submission, sinking in a DEEP guillotine and making Ferreira tap.

He grabbed the finish and looked fairly good, but I wasn’t sure if it’d be enough for a contract. I only say that because he was struggling quite a bit and Ferreira was coming off of a pretty rough weight cut. It was a good finish, but it didn’t seem impressive enough to grab the contract and compete in the UFC in one of the hardest divisions.

Darrius Flowers def. Amiran Gogoladze by TKO in the 1st Round

Gogoladze used his size early, lighting Flowers up with a HUGE combo. Flowers clinched up from there, trying to avoid the power. Flowers was doing well in the clinch, but they ended up in a bizarre position with Gogoladze upside down, locking in a triangle around Flowers. Using that position, Flowers slammed him into the ground. In an unusual turn of events, Gogoladze was forced to tap after popping his shoulder out on the slam. It was a bit of a weird finish, but Flowers looked decent and won, as an underdog, grabbing a 1st Round finish.

He mentioned the fact that he could even make 155. Personally, I agree with what Cormier and O’Malley were saying; I’d probably get Flowers to come back on the Contender Series, possibly even at 155 instead of 170.

Michael Parkin def. Eduardo Neves by Submission in the 1st Round

Neves landed the first big shot, but after a quick clinch, Parkin responded with some WILD combos. Neves wasn’t phased by that though, throwing some wild shots of his own. Neves then followed up with a HUGE takedown. It seemed like Neves was doing better, but ultimately it was Parkin that started to gain the grappling advantage. From there, Neves just didn’t really have the skill to defend and Parkin grabbed an impressive 1st Round submission win.

It’s rare to see a well-rounded heavyweight. Maybe he wasn’t facing the best competition, but he looked good and even grabbed a 1st Round submission. Once again, I’d either give him the contract or maybe another fight on the Contender Series because of the level of competition here.

Dana was in a great mood Tuesday night with ALL the winners grabbing a contract. Gomes and Saaiman were no surprise, thanks to their incredible performances against tough opponents. Aguilar was given the contract thanks to his finishing intent against a tough opponent. I wasn’t sure if he’d get it because he struggled quite a bit, but he has now become the man in the UFC with the shortest reach. Flowers’ win seemed a little too weird and anti-climactic to grab a contract, but Dana was impressed, especially since Flowers told him he was going to grab an early finish. I wasn’t really all that impressed with Neves, so I didn’t think Parkin would grab his contract. I have to agree with Dana though; there aren’t too many heavyweights with a well-rounded skillset like him.