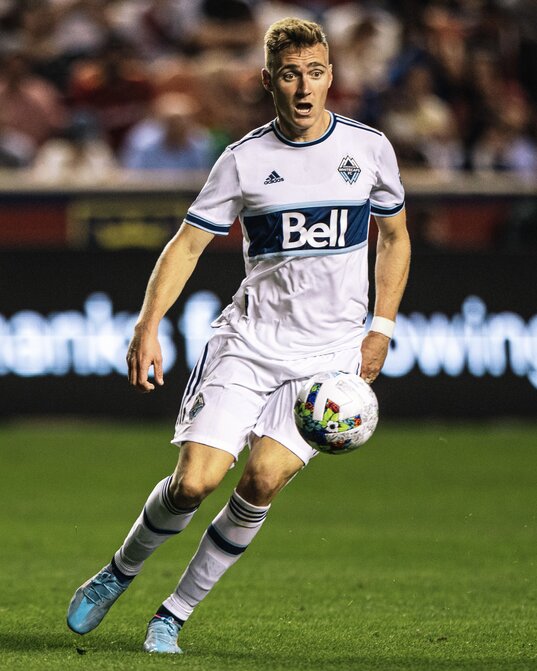 The Vancouver Whitecaps rolled into Salt Lake City, their home-away-from-home last season, hoping that the building still felt like a home pitch.

There must have been something still in the field as they were able to dig deep and score in the final minutes, getting a well-deserving point in one of their best road matches of the season.

The front three remain the same for this midweek matchup. Both Cavallini and Gauld have excelled in recent months and their performance and consistency should be rewarded. Alessandro Schöpf, while not normally a no. 10, did well in that position in the last match. Brain White has also returned to the bench after time off with an injury.

But the coach has gone for a completely different look for his wingbacks. Ryan Raposo and Cristian Dájome started after good performances from Marcus Godinho and Julian Gressel last weekend against the Colorado Rapids. The change can be expected given the number of matches they play this week.

Javain Brown was given a rare rest tonight. He did go off injured in the first half of the last match and is listed with a left ankle sprain. Jake Nerwinski and Tristan Blackmon drew up on either side of Ranko Veselinović, similar to how the Colorado match ended. There were concerns over the defence towards the end of that match, so the hope was that the few days they had off allowed the Whitecaps to iron out any issues.

The only other chance is in midfield as Sebastian Berhalter is on the bench in favour of Russell Teibert to play with Andrés Cubas. Again, this was an understandable change given that Berhalter had just returned from injury. Playing matches so close together was never in the cards for him. However, Janio Bikel is on the bench alongside Berhalter.

It was not as strong a starting lineup as what Sartini put out against Colorado, but rotation was to be expected. The challenge was whether those players who were given fresh starts would capitalize on their opportunity.

The beginning of the match was highlighted by a couple of injured Real Salt Lake players. Veselinović collided with one player only 18 seconds into the match, which required some attention.

In the fourth minute, RSL was forced into an early substitution when Justen Glad went down. He stayed on the pitch, but heavily favouring his knee.

The Whitecaps almost hit early in the 11th minute. Cubas was dumped on the play, but he was able to get the ball to Gauld. The Scot quickly passed up to Cavallini who split the centre-backs. His first shot was saved, but he fought for the rebound and scored. Unfortunately, the Canadian striker was offside.

Gauld continued to show why he’s the top goal creator on the Whitecaps. In the 35th minute, his pass up to Cavallini created a 2v1 as the striker attempted a cross to Schöpf. Zac MacMath, Real Salt Lake’s goalkeeper, saw it all the way and was able to intercept it.

Blackmon ended the half with a good chance that just sailed over the bar. The free kick from the left was headed by Veselinović back across the net. The ball was punched out to where Blackmon took a quick volley, which did not find its mark.

The rest of the half played out with neither side gaining a true advantage. It was a good 45 minutes on the road for the Whitecaps. They would have entered the locker room thinking that a single good opportunity may be just enough for the points.

The second half began with neither side making a change. Gauld tried to get things going early, showing his ability to control a ball that was passed up to him overhead. But the defender marking him was able to clear the ball.

Hasal also had to be alert as Jefferson Savarino took a power shot from just outside the 18-yard box. The Canadian goalkeeper had to stretch out to the right to make the save. It was a confidence-builder for the young goalkeeper who was just in his second match after returning from a long series of injuries.

In the 56th minute, Savarino had yet another great chance. He hit the ball off the crossbar from the middle of the 18-yard box, but Hasal was there to cover the rebound. However, the ease of Savarino being able to find space in the box was worrying.

But the game was opening up in the second half. Gauld played the ball up to Julian Gressel, who had just been subbed into the match, in the 59th minute. He played it up to Cavallini, who took several RSL players to him. He passed back to Gressel. His shot was hard, but MacMath was able to stretch for the save.

However, Real Salt Lake capitalized on their good fortune. Sergio Córdova got the ball with only Veselinović to beat. The Serbian overran the ball, allowing Córdova to get into the 18-yard box and shoot. Hasal had no chance as the ball went low under the goalkeeper for the first of the match.

Blackmon saved a potential second goal in the 73rd minute. His outstretched foot got on the cross from Real Salt Lake, which would have found its man unmarked.

Sebastian Berhalter came on and had a chance in the 79th minute. His hard shot make MacMath work as he was moving in the opposite direction, but he was quick to recover.

But the Whitecaps always make things interesting to the end. Gressel got his first with Vancouver as he headed in the cross from Gauld. It was more of a flick as Gauld’s pass already had power and was simply redirected past MacMath in the 87th minute.

That would be how the final minutes of the match played out. It was yet another point from a last-gasp effort of the Whitecaps.

Sartini said points would be needed from road matches in order to get into the playoffs, and his squad delivered.

Sartini minced no words in his assessment of the match.

“I think we did one of the best performances of the season, to be honest,” he said.

However, he tempered his reaction by noting that it is all for naught if they do not take this performance and do the same at home.

“Good point on the road,” the head coach said. “Doesn’t change anything in the sense that we need to win every point at home.”

He said that every time they had the ball, he felt as though there were chances being created. Sartini said he was confident in his team, even when they went down by one in the second half.

For Hasal, that confidence is bred from a shared mentality throughout the entire club.

“I think we came in with a mentality that we would put up a fight, which we did,” the goalkeeper said.

Gressel, who nabbed the tying goal, talked about his versatility on the pitch and the plethora of roles he’s taken up since becoming a Whitecap.

“It’s been a bit different than what I’m used to,” he said. “I think today even, in the 35 minutes that I played, I want to say I played three positions, four positions. So, it’s a lot of changing and a lot of quick thinking, but also easy because you have a clear way of playing. You have clear roles, clear structural things, tactical things that happen when certain situations arise. So, it’s easy to kind of adapt.”

It goes to show that the ‘never say die’ attitude the Whitecaps have creates goals and creates points. Those nine goals have contributed to 14 points.

It’s another short turnaround for the Whitecaps as they head back home to play Nashville at BC Place on Saturday, August 27. Kick-off is at 7 p.m.