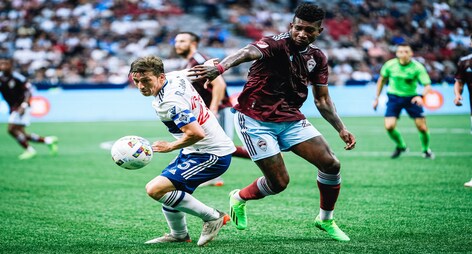 The Vancouver Whitecaps brought the heart rates up during the late stages again. Only this time, they were up a goal not down. It was started with a brilliant first half which had two goals from the engine of the team: Ryan Gauld, the Flying Scotsman.

Since it was a weekday match, heavy rotation was expected.

The first notable one was in goal. Thomas Hasal was making his first start since injuring his thumb on May 8 against Toronto FC. Prior to the injury, Hasal was giving up a lot of goals but you couldn’t fault him for most of them.

Marcus Godinho has dealt with injuries over the past few weeks and it felt like he was starting for the first time in forever. It made sense to have Ryan Raposo on the bench. It’s not like Raposo has been bad but he needs the rest. Plus, he wasn’t good during the last game against LA Galaxy. Julian Gressel stayed as the right wing-back. He is still adjusting to a new team and a new system but if the Whitecaps want to make the playoffs, they need him to be the best wing-back in MLS as he was advertised.

Another player who has been out with injury and is back in is Sebastian Berhalter. He was starting in place of Russell Teibert. (Ryan Gauld had the armband tonight)

Making his first start with the Whitecaps and his first start at BC Place was new signing Alessandro Schöpf. The former Schalke man came off the bench against LA Galaxy and played it safe. He is a creative midfielder who can provide scoring opportunities.

I would have started Tristan Blackmon in LA but he was starting on the back line along Ranko Veselinović and Javain Brown. Blackmon is a guy who knows how to stop the rush and that burned the Whitecaps against the Galaxy.

Honestly, I really like this lineup. It has defensive stability and creativity on paper. I’m sure Whitecaps fans would like to see a lineup like this more often. It is the best starting XI head coach Vanni Sartini has put out all season.

Now, could they prove that?

For the first five minutes, the Whitecaps had the majority of possession. It was odd but welcomed because they are not a team known for having possession.

Colorado looked dangerous on the counters but Andrés Cubas was there to stop it. Just Cubas doing Cubas things, making big blocks.

Ryan Gauld was playing with some energy early. He nutmegged a Colorado defender and his passes looked accurate.

The Whitecaps were pressing and it got them on the score sheet. Gressel intercepted a Rapids pass and sped down the wing. He found Gauld in the box who beat William Yarbrough easily. That is why Gressel is one of the best wing-backs in MLS and why Gauld is important to the team. That goal showed why they spent the money on them. That was a money-well-spent goal.

Vancouver continued to put pressure on the Rapids players. They were doing a good job of closing down on them and forcing them to turn the ball over.

There were some nervy moments in the box as Blackmon’s clearance wasn’t enough. The Rapids were swarming the box like bees and tried to sting the Whitecaps defenders but Jonathan Lewis’ shot went off the crossbar. Not long after the Rapids threw it across the box but Godinho was there to clear it out for a corner.

Javain Brown got hurt trying to defend in the box early in the match. He carried on but for only like 20 more minutes and had to come off. Not sure what the injury was but Jake Nerwinski came on for him.

The Whitecaps were trying to go for some long passes. Some worked, mainly the ones that went down the wing but the ones down the middle were, unfortunately, too long.

Gressel was having a good half. Not just the assist but he was making good runs and his excellent vision with the ball showed. He even tried a shot just outside the box in the 39th minute but it just went wide.

Gauld got a brace in the 41st minute as he stole the ball off Danny Wilson and broke through him and beat Yarborough, post and in. The magic hat chants from the Southsiders were heard all over BC Place once again.

The Whitecaps wanted more. The through balls kept coming and so were the corners. Why not right?

However, there were still 45 minutes to go

Hasal made a good save off Rubio early in the second half. So far, no rust showing from him.

Gauld nearly got the hat trick as he got on the loose ball but it looked like a Colorado defender cleared it off the line.

The Whitecaps continued to do a good job of stealing the ball. Gressel tried the shot from outside the box again but like the first one, was wide of the right post.

Gauld continued to be the engine of the offence. He tried to go for the hat trick again but it went off a Rapids defender (almost an own goal) and wide for a corner. The Flying Scotsman continued to run at full speed.

The Rapids’ current started to pick up a little. They decided to get some action in the Whitecaps’ own half. However, Hasal was up to the task and the Whitecaps midfield and defenders managed to stand guard. The shots that were taken were usually over Hasal’s head.

The big blocks continued after Nerwinski gave a free kick in a dangerous spot. There was a lot of frantic action in the box once again but the Whitecaps survived.

But the Rapids broke the clean sheet in the 76th minute. US international Gyasi Zardes got a tap in past Hasal but not before Jonathan Lewis cut inside the box. Could we be in for the Cardiac Caps once again? Only this time with the ‘Caps up leading? It looked like it.

Ranko Veselinović was down on the pitch for quite some time. There was some concern as it looked like a head injury. Fortunately, the Serbian was able to continue.

Nervy moments were happening late. Shortly after Gauld was taken down by former Whitecap Steven Betashaur with no call, the Rapids went back the other way. The ball was in the air with Zardes running down the middle, but he couldn’t get a good touch on it.

The Whitecaps were parking the bus. That isn’t a good strategy. It’s a gamble.

The Rapids came close. A cross in the box came but the header from Zardes went off the post. The heart rates of Whitecaps fans went through the roof.

Raposo did a good job of keeping the ball deep in the Whitecaps half and forcing a throw-in for them. Apparently, the Rapids did not like that, especially Ralph Priso who got the game’s only yellow card.

And…exhale. It was a nervy second half but the Whitecaps got a massive three points and are above the playoff line for the first time this season.

Sartini was quite pleased with the win. But he thinks the game should have been sealed.

“I think we played 70 minutes of fantastic soccer,” said Sartini. “When you don’t ‘kill’ the game, everything is wide open…our fault for not scoring the third goal.”

“Ryan was very good, in fact, he has been very good for the last six or seven games,” said Sartini.

Gauld spoke about the importance of the win and the push for the playoffs.

“I think we had a great first half, second half and made it hard for ourselves…we know every game is important…it could come down to the last few games,” said the Scottish international.

When asked about his two goals, this is what he said:

“It felt good but it should have been a hat trick.”

Wow. Has it really been that long?

That random dad always yelling at his kids’ soccer games. Luckily, he always makes pasta after.

The Whitecaps have to get back in action quickly as they head to Utah to take on Real Salt Lake on Saturday. Fifth place RSL are four points above Vancouver in the standings. All matches are big going forward. Kickoff is at 7:00 p.m.