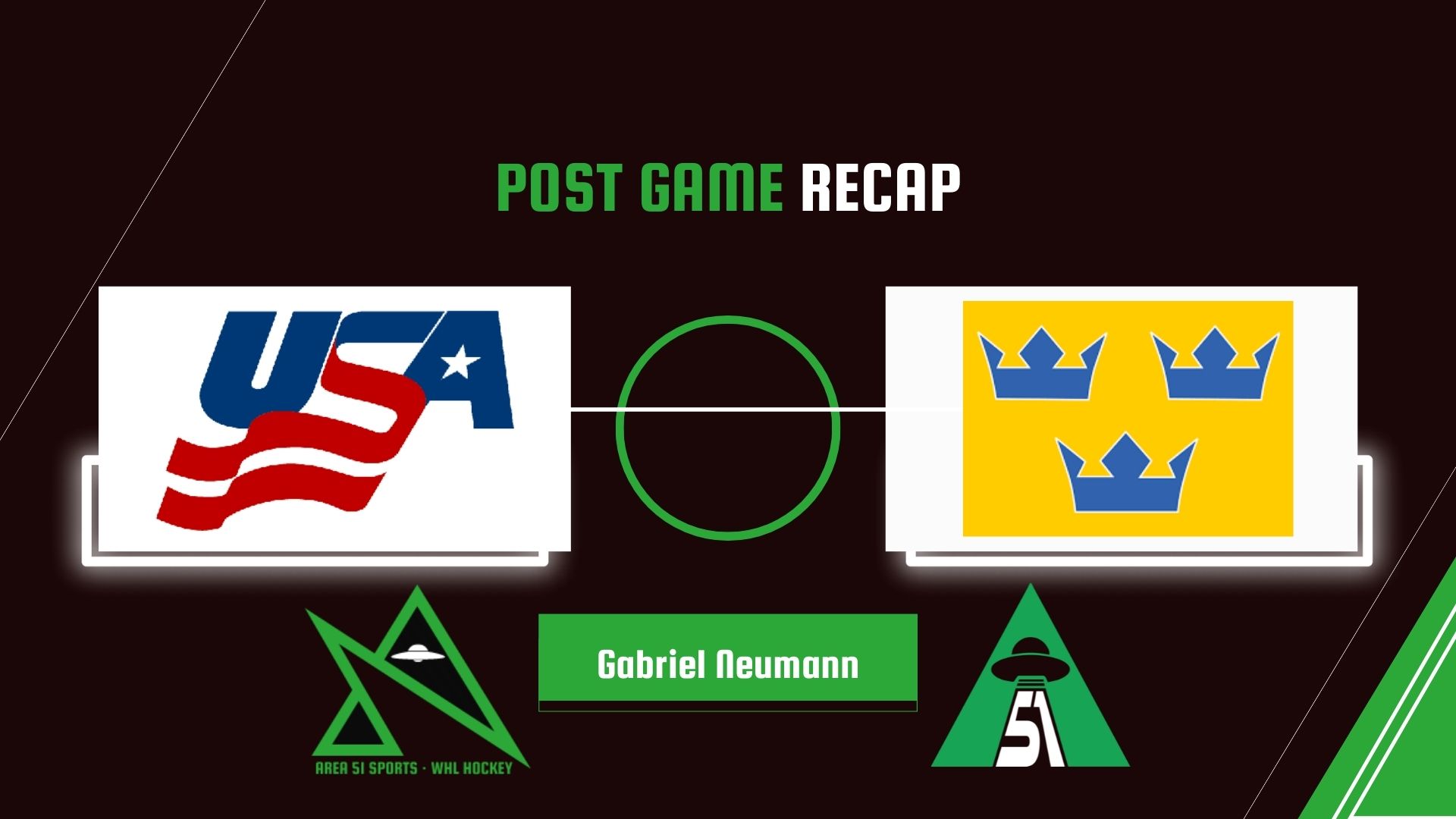 Although Sweden made them fight for it in the end, Team USA locked in a 3-2 win at the 2022 World Juniors, their fourth straight at the tournament. Continuing momentum following their victory over Austria on Saturday.

The game began at pretty even strength, with plenty of offensive time in either end. However, USA’s defense began to shine early, always on the puck and consistently clearing the zone easily. While their offense has been strong this entire tournament, USA’s defense is something to be admired. It’s clear the team just clicks in the way every successful team needs to.

The first penalty of the game came at 5:14 when Sweden was called for tripping, sending USA to their first power play. Initially, Sweden’s defense was strong, but USA continued to prove their skill in the offensive zone, winning a lot of races and face-offs.

At 6:35, Brett Berard (NCAA/Providence College) scored a power play goal, putting USA on the board first.

The rest of the period was quiet for the most part. Although the shots on goal were almost even, USA continued to control the majority of the play.

An interference penalty was called against American forward Dominic James (NCAA/Univ. of Minnesota-Duluth) at 20:00, just when the period ended, which meant Sweden would start the second period on the power play.

Sweden started with their power play, but did not score.

At 8:24, Sweden received a slashing penalty, but USA did not manage to score on their power play.

Throughout the World Juniors, USA has been learning a lot about themselves, developing good physicality and a great defensive structure. They continued to demonstrate this throughout the second period, consistently staying on the puck regardless of team possession.

At 18:58, Sweden was called for boarding, but it was not immediately certain whether or not it was a major or a minor penalty. Initially called for major so the play could be reviewed, it was determined it was simply a two-minute minor, and USA would have their third power play.

The third period started with the remaining 58 seconds on the power play. While USA’s offense continued to increase exponentially, Sweden’s defense decreased. Despite this, Sweden’s goaltender, Jesper Wallstedt (SHL/​​Luleå HF), demonstrated immense skill, making difficult and impressive saves and keeping his team in the game.

After a tragic turnover from Sweden, however, Coronato scored his second of the night at 5:26, and USA was up 3-0.

At 11:38, Emil Andrae (HockeyAllsvenskan/HV71) scored, putting Sweden on the board and ending Mbereko’s shutout.

The second half of the third period got interesting; Sweden really began to make USA sweat. At 18:17, Wyatt Kaiser (NCAA/Univ. of Minnesota-Duluth) earned an unfortunate delay of game penalty, and Sweden pulled Wallstedt, making it a six on four.

Sweden took advantage of their power play and the six on four, and at 18:45 Ake Stakkestad (HockeyAllsvenskan/BIK Karlskoga) scored, and the game was 3-2.

Although Sweden came back to make a push in the last few seconds of the game, it was to no avail, and Team USA secured their win.

(Someone tell him he did a good job, please.)

Coronato was named Player of the Game for USA, and Theodor Niederbach (SHL/Frölunda HC) for Sweden.