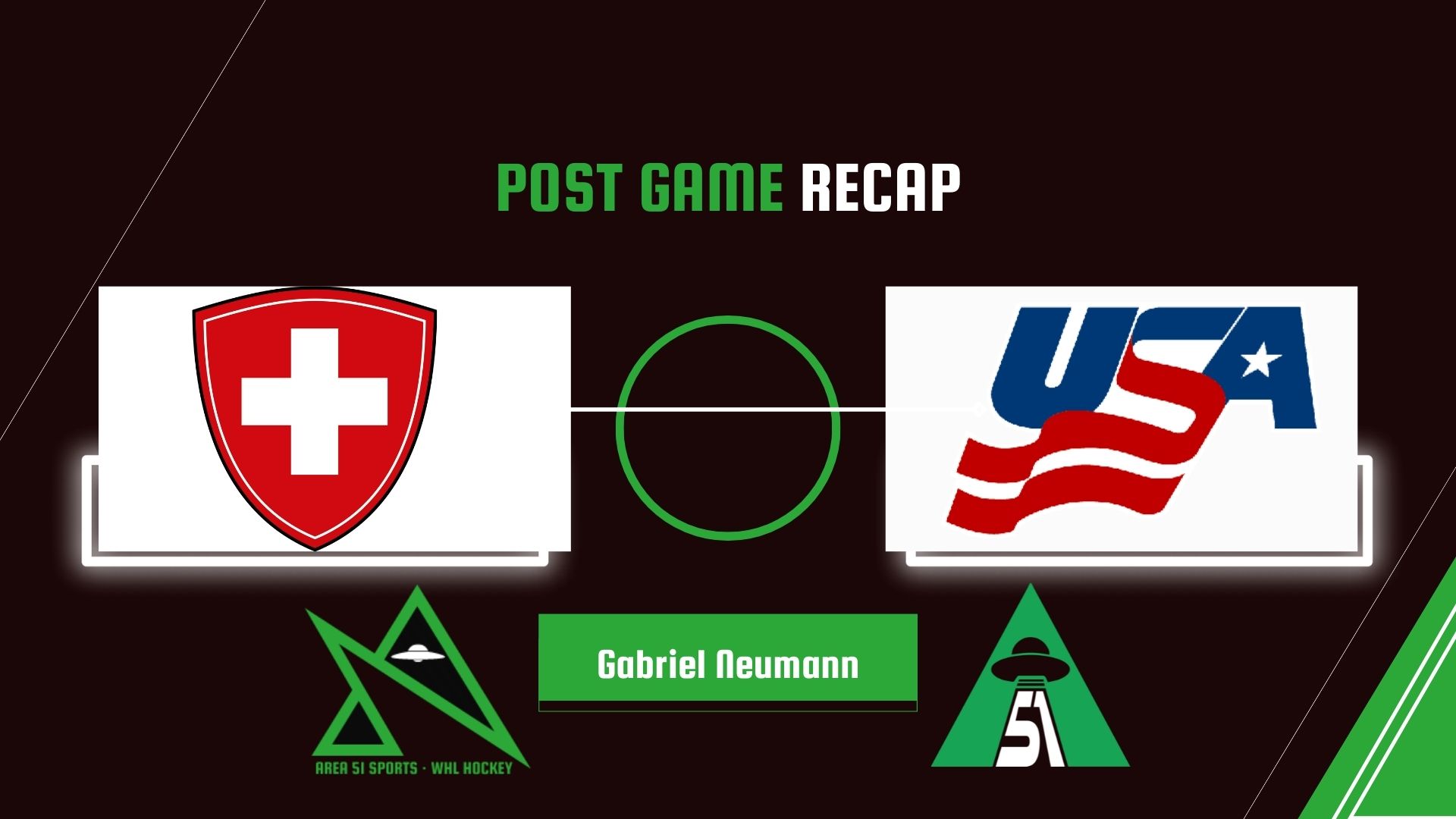 Team USA and Team Switzerland took the ice in an exciting game in Edmonton, Alberta on the third day of the 2022 World Juniors. Each team had their strengths, but ultimately, USA came out on top 7-1.

The first period was very evenly matched. Switzerland played with a lot of men on net, and while in their zone, they packed it in tight. The team was very in tune with each other, defending from the inside and maintaining strong offense. They created a lot of chances in front of the net from the get-go.

USA also had a strong first period, very similar to Switzerland’s. They also created a number of offensive opportunities and maintained a strong defensive core. There was roughly an equal time in both zones, and both goaltenders did very well.

The first penalty came at 12:25, when Logan Cooley (NCAA/Univ. of Minnesota) was called for high sticking. USA’s special teams were very good; on the flip side, Switzerland did not get much done while on their power play.

The second penalty was earned by Switzerland when Joel Henry (SL/Küsnacht Lions) was called for cross checking. Both Cooley and Sean Behrens (NCAA/Univ. of Denver) were hurt, but Cooley returned to the ice shortly after, while Behrens made a trip down the tunnel. USA went to the power play but did not manage to score.

Seven seconds into the second period, Switzerland was called for delay of game, sending USA to their second power play. Although they managed to create more traction in front of Switzerland’s net, they did not score.

The second period saw a lot more action. USA’s game-plan was clear: Wear the Swiss down early, and make them chase the game. While the first period was very equally balanced, the USA seemed to do just what they were hoping for. Switzerland’s discipline was becoming quickly unraveled in the second period, and USA continued to capitalize on this, building their offense and showing more action in front of the net.

However, even though they were quickly tiring, Switzerland absolutely came to play. They still pushed hard and did not give up, and continued to challenge USA, even though USA pushed back just as strong.

At 4:01, Switzerland was called for holding, and USA went to their third power play. Carter Mazur (NCAA/Univ. of Denver) scored USA’s first goal at 5:54, bringing USA up 1-0.

Switzerland continued to play a very physical game, finishing a lot of hits, and really seemed to pick up in competitivity.

At 11:59, USA’s second goal was scored by defenceman and team captain Brock Faber (NCAA/Univ. of Minnesota).

At 17:16, Landon Slaggert (NCAA/Univ. of Notre Dame) recorded a goal of his own.

Thomas Bordeleau (NHL/San Jose Sharks) was definitely part of why USA’s scoring increased so quickly in the second period. His skill at the face-off circle jumpstarted a lot of plays, and he was credited for two assists on the first four goals.

With less than a minute to go in the third period, at 19:23, Matthew Coronato (NCAA/Harvard Univ.) scored USA’s fifth goal.

The second closed with USA leading the game in both goals and SOG, with the score at 5-1 and 30-14, respectively.

The period began strong for USA: Switzerland was called for slashing at 1:37, and Bordeleau scored a power play goal at 1:57, bring USA up 6-1.

USA continued their pressure from the second period, working their offense and staying mainly in front of Switzerland’s net. Red Savage (NCAA/Miama Univ. — Ohio) was called for tripping at 3:58, but Switzerland’s power play was not a strong one. USA’s special teams continued to impress, buzzing around the net and killing the penalty successfully.

There were not a lot of whistles this period. Besides the few penalties at the start, the play was consistently clean.

By this point, Switzerland was tired. They had run out of gas, but they didn’t let that stop them. While other teams have been seen to give up once they had been worn out, Switzerland continued to fight and push.

Cooley was called for tripping at 16:55, sending Switzerland to the power play, but USA’s special teams thwarted their attempts at answering the six goals scored.

At the conclusion of the game, Kaidan Mbereko (NCAA/Colorado College) had made 23 of 24 saves. Pasche made 25 out of 30 and Patenaude made seven out of nine.

Carter Mazur was named Player of the Game for USA and Dario Allenspach (NL/EV Zug) for Switzerland.