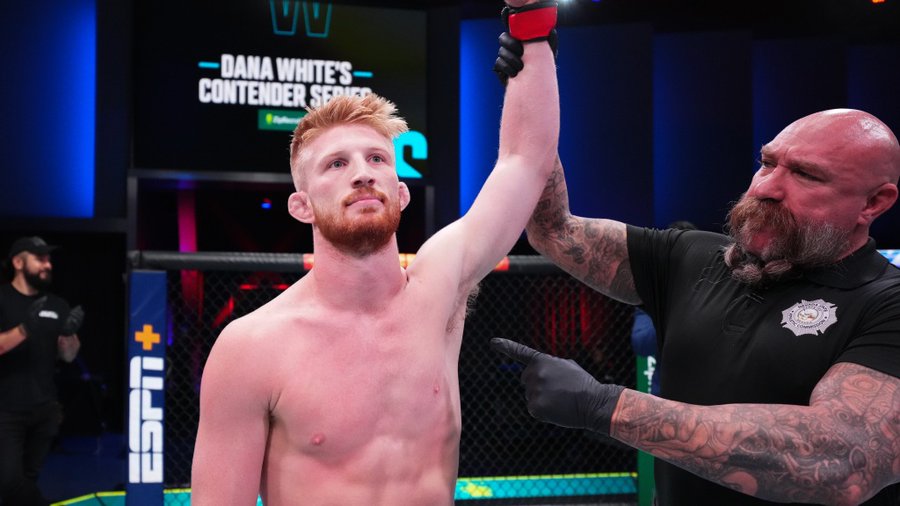 It was another exciting Tuesday at the UFC APEX centre with 3 contracts handed out. The night was headlined by one of the biggest name’s in Contender Series history: Bo Nickal. He wasn’t given the contract for his sensational performance, but Clayton Carpenter, Erik Silva and Jamal Pogues left with a sweet new contract in hand. We also saw Karolina Wójcik dominate her opponent, but didn’t quite do enough to impress the boss. All the fights, along with the BLÜ’s Power Rankings for the night, are described below.

Lavado opened the offence first, using her jabs and combos to keep the shorter and aggressive Wójcik back. She was doing well to defend, but Wójcik still managed to swarm in and do some damage. After a couple minutes of that, Wójcik pushed Lavado into the fence. Sadly, because of her height, she couldn’t get it down to the ground. Lavado responded to that with a fairly significant shot. After Wójcik brought the fight to the fence again, Lavado was the one who ended up in control. The round ended with more control from Wójcik, but the round could’ve easily gone to Lavado with her striking.

Wójcik opened up a lot harder the second round, immediately working for those clinches. It was tough to tell who was really getting the advantage in these situations. Lavado reversed her quite a bit, but Wójcik was clearly the one advancing the action. It took her until halfway through the 2nd Round, but Wójcik finally used her clinch to grab a takedown. She was working for some finishes, but Lavado was doing well to shut down her offence. From there, Lavado moved the fight back to the feet and even ended up briefly taking her opponent’s back. As opposed to the opening round, I’d have given that one to Wójcik.

Lavado opened the final round with an attempt at a kick, but was sadly thrown right down to the canvas. From there, much like the 2nd Round, Wójcik was trying to get some offence going, but Lavado was doing well to hold her and shut things down, possibly even working for a submission of her own. While that could be effective in a real fight, it’s kind of silly to employ a ‘holding’ strategy when you’re being scored, especially when you’re on a show that’s dedicated to grabbing exciting finishes. From there, Wójcik put caution to the wind and worked for a DEEP submission. She didn’t get it and was reversed with Lavado working for a submission. It ended with Lavado in the dominant spot, but with almost the entire round spent in control, it was clear that Wójcik won the fight on the cards. The judges agreed, all scoring it 30-27 for Wójcik.

Maybe it wasn’t the most exciting fight, but I can confidently say that that was mostly due to Lavado being SUPER defensive. Personally, I thought Wójcik did enough to push the action and grab a contract, but, of course, that’s always up to Dana White.

Cháirez was trying to lead the dance in striking, but every time he threw a strike, Carpenter would throw one back and land twice as hard. Then Cháirez started to get creative with his striking, throwing out HUGE knees. He was landing some good ones, but Carpenter was holding his ground with big strikes of his own. As the round went on, Cháirez started to land some bigger shots which wobbled Carpenter. From there, Carpenter tried to get the fight to the ground. He got the takedown, but it was Cháirez that found himself on top. With a LOT of back and forth action, it was pretty hard to tell who took it on the cards. I’d have probably said Cháirez thanks to the defence and those early, damaging shots.

Both men opened the second round a little slower, but it was Carpenter who still had the clear power advantage. After a few minutes of even striking, Carpenter broke it up with another HUGE takedown. This time it was in the middle of the cage with full control. Thanks to that control time and elbows on the ground, I’d have given that round to him, tying it up 1-1 on my cards. Once again the round started off a bit slow, but Carpenter was still the one throwing heavier shots. The difference at this point seemed to be the kicks of Carpenter, clearly bothering Cháirez.

Then, just like the other rounds, Carpenter launched himself in and grabbed a takedown. It didn’t last long, but did a lot to push the momentum in his favour. After slowing down quite a bit throughout the round, Cháirez was then dragged down one final time and busted up with ground and pound. Thanks to those last two rounds, I’d have given it 29-28 for Carpenter, but it was close. The judges agreed, scoring it 29-28 for Carpenter.

Being such a MASSIVE flyweight, it looked like Carpenter would be the one to get tired, but he kept his pace going the entire fight. It may not have been a dominant win, but it was exciting and he was trying to grab a finish the whole time. To me, that warrants a contract. You’ve also gotta consider how HUGE this kid is; he looked like he’d be competing at bantamweight, maybe even featherweight.

Erik Silva def. Anvar Boynazarov by TKO in the 1st Round

Silva ran straight into Boynazarov with a combo, trying to hide a heavy takedown attempt. He grabbed it and started to land some heavy ground and pound. He kept that going with HEAVY elbows until the ref called it off for a dominant 1st Round finish.

I don’t think there was any doubt after watching that that he earned a contract. He may not have gotten into a brawl with the kickboxing champion, but he was smart, took him down and shredded him for a 1st Round win.

In an interesting choice of strategy, it was the MUCH smaller Renato that opened the clinch battle. He couldn’t keep him there, but it sent a message. After they separated, it was Pogues that got his offence going, landing some crisp shots, walking Renato down. Pogues was definitely landing the heavier shots, but Renato kept returning with some shots of his own. Neither man really did anything all that significant, so the scoring could have gone either way in the opening round.

Being the much smaller man, Renato was more active, landing some nice combos to open the 2nd Round. You’d have thought Pogues, in his second DWCS appearance, would come in gunning for a finish, but he was really just landing jabs and the occasional decent shot. He went for the occasional takedown as well, but couldn’t drag him down.

After two rounds, I had no idea what to think, all I knew was… neither guy was going be getting a contract here. Both men started HARD in the 3rd Round and it was Pogues who started to finally seem to gain some momentum. He started to land some HEAVY shots that seemed to wobble Renato. With not a whole lot else going on, I’d have given the round to Pogues, but I couldn’t tell you who I thought won the fight when neither man really did anything significant. The judges ended up scoring it 30-27, 29-28 and 29-28 for Pogues.

As I mentioned, it seemed clear to me that neither guy was getting a contract here. Renato looked way too small for heavyweight and Pogues didn’t even use his MASSIVE size advantage. When you’re CLEARLY the bigger guy and your opponent isn’t even a heavyweight, your first thought should be to pressure and go for a finish. It was clear that Renato wasn’t doing any damage, so why wouldn’t you push forward as Pogues? It just doesn’t make sense.

Bo Nickal def. Zachary Borrego by Submission in the 1st Round

As expected, Nickal came in, ran straight at Borrego and SLAMMED him into the canvas. He got up, but still had Nickal all over him. From there, Nickal took Borrego’s back, locked in the submission and made him tap with an unbelievable 1st Round Submission.

Some people mentioned a developmental contract but… this guy already clearly has enough talent to compete in the UFC. This is especially true when you consider the fact that middleweight is one of the weakest divisions. This was an absolute no-brainer for a contract and the number one spot in my power rankings.

Bo Nickal: No Contract… yet (promised another DWCS appearance)

There were a couple of surprises (at least to me) this week when it came to the contracts. Dana was clear in saying that Wójcik looked good, but wasn’t blown away by anything. He was clearly open to another appearance, but didn’t want to give the contract here. Personally, like I said before, I thought this was more because of what her opponent was doing. Considering her talent, I thought she’d be a welcome addition to the strawweight division.

For Carpenter, he took his time, but Dana gave him the contract because he knew how tough of an opponent Cháirez was. He was impressed that he made a comeback after the opening round against someone that good. No surprises there, but I was a little surprised by what Dana said about Silva. He opened by stating he really didn’t think Boynazarov was in the right division. I’ll admit, I noticed that myself while researching, but he’s so talented as a striker that I expected a lot more. That aside though, Silva still grabbed an impressive finish, so Dana gave him a chance.

The biggest surprise… literally and metaphorically, was that the heavyweight, Pogues grabbed himself a contract. Historically, when given a second chance like this, if you don’t get a finish, you don’t get a contract. What changed Dana’s mind was Pogues’ willingness to take a fight on short-notice and also mentioned that he looked good with only a few strikes away from a finish. I don’t think I would’ve been as generous after a performance like that over someone much smaller, but he thought he’d give him the chance at competing with a full training camp.

Finally, Bo Nickal, one of the biggest names to hit the Contender Series. I see why they’re taking it slow with him, but he’s CLEARLY got all the necessary talent. With the middleweight division struggling to find huge talent, this was a no-brainer for me. We’ll see him one more time, maybe before the season ends, likely with that contract in hand.