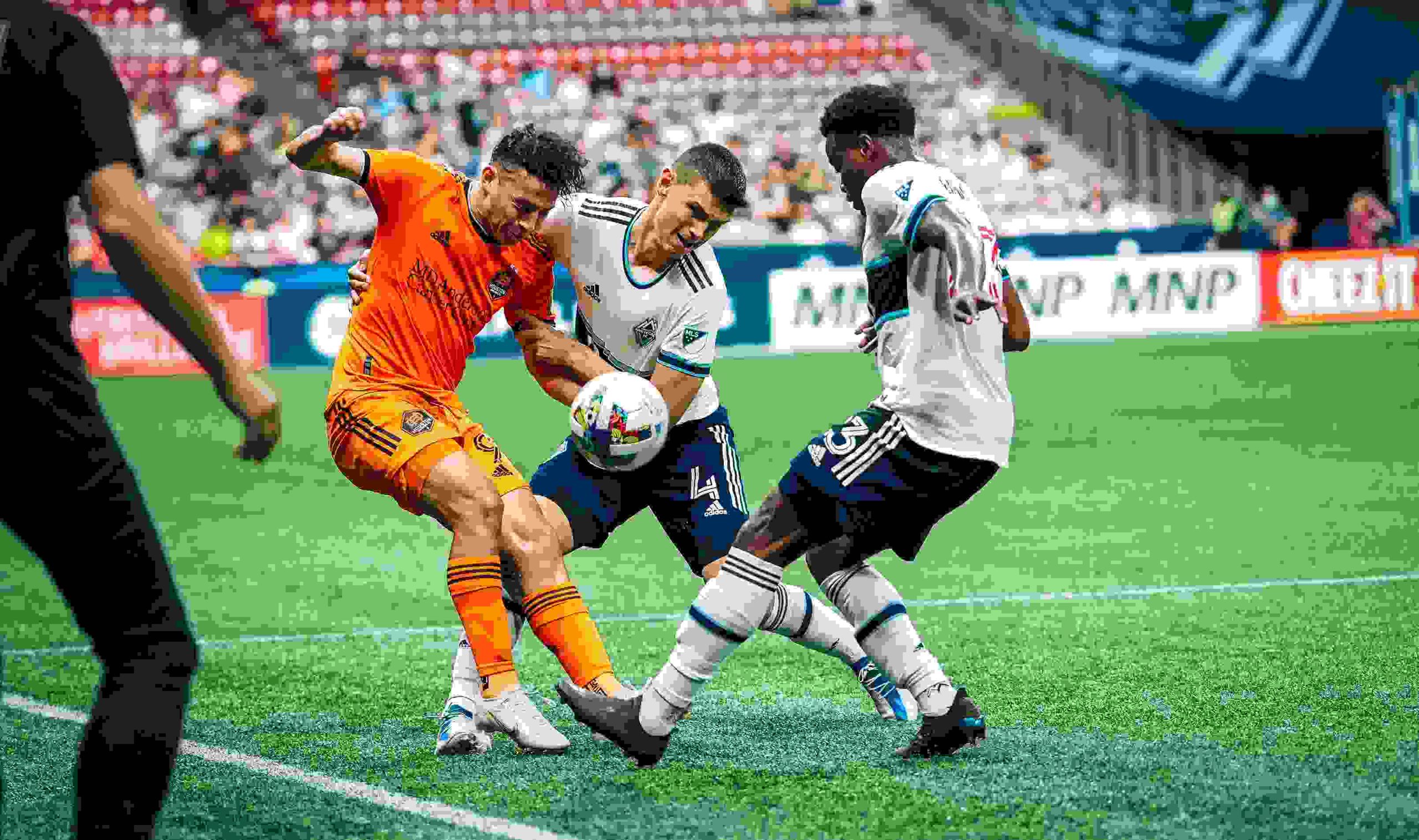 The Vancouver Whitecaps like to leave things to the last minute. That’s exactly what they did with a 2-1 win over Houston Dynamo. In terms of the playoff race, that’s huge.

The Whitecaps have many players on the Health and Safety protocol list.

The lineup really wasn’t a surprise. It might be surprising to see Tosaint Ricketts start up front but Lucas Cavallini was dealing with a quad issue. However, he was on the bench. Ricketts hasn’t seen a lot of game time but he has been effective with it.

It was nice to see Leonard Owusu get a start. However, he has looked just OK and would need to step up big time in Cubas’ absence.

The back three stayed the same from the last game in Nashville and that’s a good thing.

Pedro Vite was high up in the midfield with Ryan Gauld. Vite did not look good in Nashville (He was subbed off at the half) and he needs to bounce back. He lacked intensity last game and needs to bring it.

On the bench were four defensive midfielders: Michael Baldisimo, Sebastian Berhalter, Janio Bikel and the newly signed Alessandro Schöpf. Maybe we could see the new guy? Let’s find out.

In the opening minutes, the Whitecaps had a lot of possession. They were also doing a good job of winning the ball back by closing down on the Dynamo ball carriers.

But after that, it was Vancouver, we have a problem and not Houston, we have a problem. The Dynamo struck first. Their corner kick was cleared by Russell Teibert but Sam Junqua got a shot outside the box off. But Cropper and the Whitecaps defenders were very confused by the shot and Fafa Picault redirected it into the net.

That was a bad display of miscommunication and not the start the Whitecaps wanted. It seemed to be offside…but it wasn’t.

Julian Gressel was pulled down in the box at first glance but there was no call. Go figure. He and Junqua got tangled up and it looked like they were bear hugging but Gressel got the foul. Again, go figure.

The Dynamo were in full control of the ball heading into the 20th minute. They were crossing many times but thankfully the back three were there to clear it. Houston was also very quick to get the ball back and their passing was quick and accurate.

Gressel got Vancouver’s first big chance of the game when he got at the end of a cross from Ryan Raposo. Unfortunately, he shot it wide.

Raposo was doing a good job of pressuring the Houston ball carriers and displayed some pace down the left wing. He continues to improve.

But it felt like the Whitecaps were chasing the Dynamo, especially in the middle of the pitch. Picault and Darwin Quintero in particular were making life difficult for the ‘Caps.

It was a half where the Whitecaps looked good, gave up a bad goal, looked flat and then came close a couple of times.

The Whitecaps came out with some quick passing. Sometimes…too quick. Some of the one-touch passes have led to turnovers. Fortunately, the Whitecaps managed to get the ball back quickly.

Vancouver’s poor communication almost cos them again as Picault tried the volley but failed. He was left all alone as Tristan Blackmon, Ranko Veselinović and Javain Brown were nowhere to be seen around him.

The Whitecaps got a great chance from Lucas Cavallini who was subbed on for Vite. He took the cross from Gauld but he couldn’t get a good touch on it.

Houston looked dangerous on the counter when Thor Ulfarsson activated Mjolner and took a thunderbolt of a shot that was stopped by Cropper and off the post. Thankfully, it didn’t redirect off Cropper’s back.

Steve Clark challenged Cropper with a great save of his own. That was off Gressel after he received a good cross from Gauld.

This game was opening up. It was anyone’s game.

The Whitecaps then decided they were going out all out with Michael Baldisimo (subbed on for Owusu) as the only DM. Gauld has become the box-to-box midfielder while Gressel has been pushed forward while Raposo and Ali Ahmed make up the wingbacks. Ahmed was making his BC Place debut and was subbed off for Teibert.

Vancouver was moving the ball well but like many games, this season, couldn’t find that right amount of space for a shot or the final pass failed them.

Simon Becher, the Whitecaps first-round pick in last year’s MLS SuperDraft came on for Javain Brown. With three strikers up front, it was all or nothing for them.

Cavallini ended up getting another yellow card. He will miss the next match against LA Galaxy.

But the Whitecaps love to leave it late and they did it again. Ahmed took Cavallini’s pass and displayed good patience in the box. His pass found Becher and the former SLU Billikens striker got his first MLS goal in his MLS debut. Now that’s a feel-good story.

The Cardiac Caps got another late winner as Cavallini found a loose ball after the Dynamo failed to clear. Clark should have had that one but Cavallini’s eighth goal of the season gave the Whitecaps much-needed three points.

They really improved in the second half and the youngsters made a difference. They did an excellent job fighting for points late and that has been the theme of the season. The Whitecaps have been chaotic but it has been fun to watch them recently.

Sartini says a draw would have been a fair result but was very happy with the three points.

“We gave away a goal, like very naively…the second half was much better, we were pushing more,” said the Whitecaps head coach. “When we scored the tie I think it was a fair result, but then we got the 2-1 goal but a tie would have been a fair result.”

Sartini spoke about this game being in the highlights, but only if they make the playoffs. He also

“It’s not sustainable for us, we need to be better in starting the game and be ourselves from the beginning,” said Sartini.

“I like the results to be under pressure…historically Italians are not the greatest planners, I’m talking about government too,” said Sartini. ” But we always find ways to come through so maybe it’s in my DNA!”

Becher was over the moon after scoring his first MLS goal in his debut. Everything still hasn’t sunk in for the 23-year-old.

“The ball just fell to me and it was kind of a reaction shot, to be honest,” he said.

Cavallini was buzzing after his late winner and isn’t too concerned about the tight playoff race.

“As the season ends, things start to get more interesting,” he said. “We need to gain as much points as possible and concede as less as possible, especially at home. But the road is also important…we’ll just keep fighting.”

Cavallini was asked if that was the softest yellow card he has received.

“Each one gets softer and softer,” he said.

Big credits to Whitecaps club reporter Sarita Patel for finding this stat. I was wondering about the number of late goals the Whitecaps scored.

As it stands, the Whitecaps have 30 points. That’s two points behind seventh-place Seattle Sounders. That is also five points behind third-place Minnesota United. Man, so tight.

As mentioned earlier, the Whitecaps’ next game is against LA Galaxy. It is in LA next Satuday and kickoff is at 7:00 p.m. Pacific.