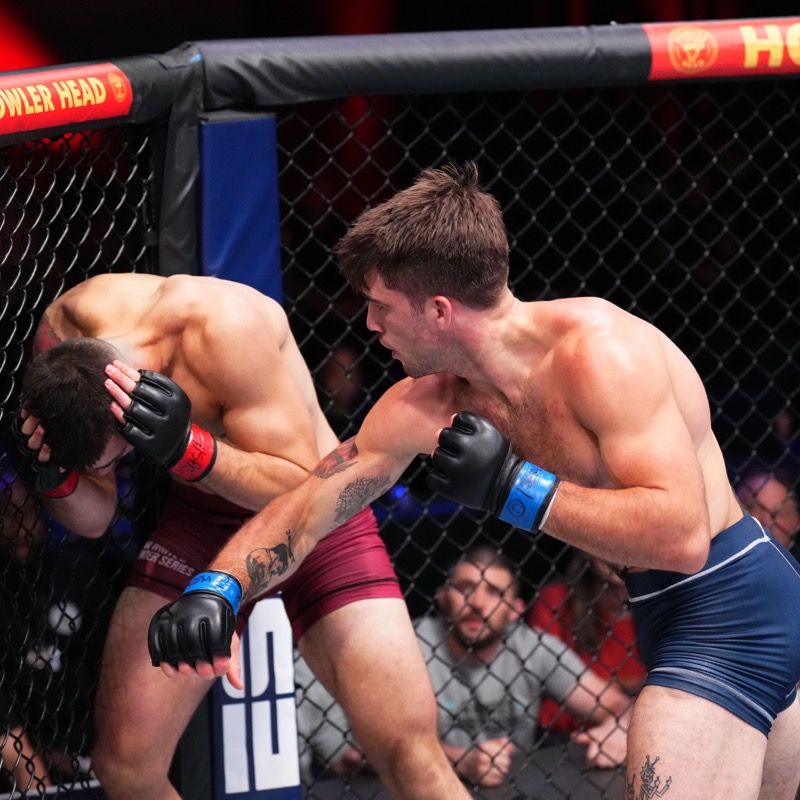 After a lacklustre opening week, the UFC Contender Series rebounded with what may have been the best card in the show’s history.

Instead of one contract, Dana White handed out FIVE of them after seeing four HUGE finishes and a WILD, three round brawl. Billy Goff, Waldo Cortes-Acosta and Chris Duncan all grabbed 1st Round knockouts. It took Vinicius Salvador a little longer, grabbing a 2nd Round TKO over an outrageously tough and dangerous Shannon Ross. We were also treated to an insane brawl between the featherweights, Francis ‘Fire’ Marshall and Connor Matthews. All the fights, along with the BLÜ’s Power Rankings for the night, are described below.

Billy Goff def. Shimon Smotritsky by TKO in the 1st Round

Goff opened HEAVY, lighting Smotritsky up with some big shots. The tables turned pretty quick though as Goff was ROCKED by a huge head kick. It was looking like it was close to the end, but Goff recovered well and really started to bring his offence back. As the round went on, Goff started to land shot after shot, stumbling Shimon back into the fence. Knowing he was doing some real damage, Goff kept the pressure going and let loose combo after combo until Smotritsky hit the canvas and the ref stopped the action.

He may have faced some early adversity with that head kick and he admitted his performance wasn’t perfect, but there was absolutely no doubt Goff was getting a contract here. He was going against someone who had already been on DWCS, weathered that early storm and came back to grab a MASSIVE 1st Round TKO win. I should also mention that he looked pretty solid in his CES title fights as well.

Waldo Cortes-Acosta def. Danilo Suzart by TKO in the 1st Round

Cortes-Acosta used his huge reach to his advantage, landing MASSIVE jabs early. Suzart was struggling with the reach, but was still landing some BOMBS. Waldo was landing some huge shots, but ended up in a clinch with Suzart along the fence. It looked like Suzart was maybe going to push through to the end of the round, but they separated from the clinch, letting Cortes finish off with some more INSANE output.

Waldo definitely isn’t the cleanest or heaviest guy in the division, but he’s got some reach and some decent boxing skills. He won’t be challenging the top 15 any time soon, but he can certainly get a couple wins and improve enough to get there some day. Another clear contract winner, but not impressive enough to be near the top of my Power Rankings.

Marshall made the first move, but they both exploded into a flurry QUICK. Matthews was pressuring Marshall back into the fence early, but Marshall responded with a quick takedown. Matthews got back up quick though and started to land some more combos. Marshall then worked for more grappling, trying to pin Matthews into the fence. After some more striking, Matthews got clipped by something and started to wobble. Taking advantage of that situation, Marshall finally got the takedown he wanted and took his back. Matthews managed to get back up, but it was still a clear round for Marshall.

Marshall came in HARD the 2nd Round, wobbling Matthews early, multiple times and slammed him into the canvas again. From there, Matthews threatened a heel hook, forcing Marshall to stand back up with him. Sadly for Matthews, he was taken down once again and started to get shredded by ground and pound. After some smothering offence, Marshall grabbed another round on the cards.

Both men slowed down the final round, allowing Matthews to get off some good shots. Marshall was still the one getting the better of the exchanges though, landing BOMBS, trying to get him out of there. Matthews put up a great fight, but after 3 rounds, it was clear that Marshall had won the fight and likely grabbed a contract.

For the first time this season, we saw a full, three round, explosive, all-out brawl. It was so back-and-forth with both men almost grabbing a finish, that we could have seen both men grab a contract. I wasn’t sure if Dana was feeling generous enough for that, but there was no doubt Marshall would be grabbing a contract here. The UFC needs more relentless, WILD brawlers at featherweight.

Vinicius Salvador def. Shannon Ross by TKO in the 2nd Round

Salvador opened the action early, using his reach to land a couple jabs. He was doing some interesting things with his striking, but Ross was landing heavy. Then it was Salvador who stole the show, dropping Ross with a BOMB. It looked like Ross was done, getting destroyed on the ground, but he recovered. He was still struggling with the striking of Salvador, but he started to land some bigger shots as the round went on. With a minute left in the round, Ross was dropped bad AGAIN. Once again, he recovered and made it to the end of the round.

They started off much slower this time, but it was Ross who landed the heavier shots early this time. The fight started to heat up as the 2nd Round went on with both men getting some antics going. Ross was clearly the one starting the steal the momentum though. He landing some CRISP combos which were wobbling Salvador and backing him into the fence. Just as it was looking like Ross was going to start running away with the fight, Salvador landed another BOMB, dropping Ross for the final time.

Going into this card, I really didn’t think Salvador would be able to overcome Ross. Ross is an incredible fighter, plus, Salvador’s absurd height told me there was no way he’d have the power to finish anyone of a certain calibre. He must be doing some kind of WILD weight cut, because he not only is WILDLY tall for flyweight, he’s got the power to back it up. Already, he has the potential to be one of the most dangerous men in the division. It was clear he was grabbing a contract here and there seemed to even be an argument for Ross to grab one as well.

Chris Duncan def. Charlie Campbell by KO in the 1st Round

Duncan landed first with a couple of heavy shots and a nice kick, already giving Campbell a lot think about. Then Campbell flipped the tables, landing a BOMB of an uppercut that dropped Duncan to his knees. From there, he kept the onslaught going, landing HUGE uppercuts. It looked like a finish was near… but it was Duncan who ended up grabbing the finish. He countered those uppercuts with a NUKE that dropped Campbell on his back. He threw one more punch from there to knock Charlie out cold.

Duncan struggled a bit, but there’s no doubt that this guy deserves a contract. He came back in a 2nd DWCS appearance, weathered the early storm and SMOKED Campbell for a beautiful KO win. Once again, this is exactly what we’re looking for and it looked like we were on pace for a 5 or 6 contract night.

Going into the decisions, it seemed pretty likely that we’d see 5 contracts, possibly even a RARE 6th contract. Noticeably happier this week, White opened with a clear contract for Billy Goff. He followed that up saying Cortes-Acosta needed a lot to work on, but at 7-0, with a finish like that, he had to give him a shot. One that didn’t have any criticism was Marshall. Dana was STOKED, saying this fight could’ve been a prelim on a PPV it was so good.

Not stopping there, as expected, he was also WILDLY impressed with Salvador, especially with his record of grabbing finishes in the flyweight division. Finally, he had to give out a 5th contract to Duncan, who also clearly did enough to win a contract. No surprise here that all 5 winners grabbed a contract, but I thought we may have been treated to a rare 6th contract. We weren’t, but it doesn’t matter because that was likely the best DWCS card I’ve seen yet.