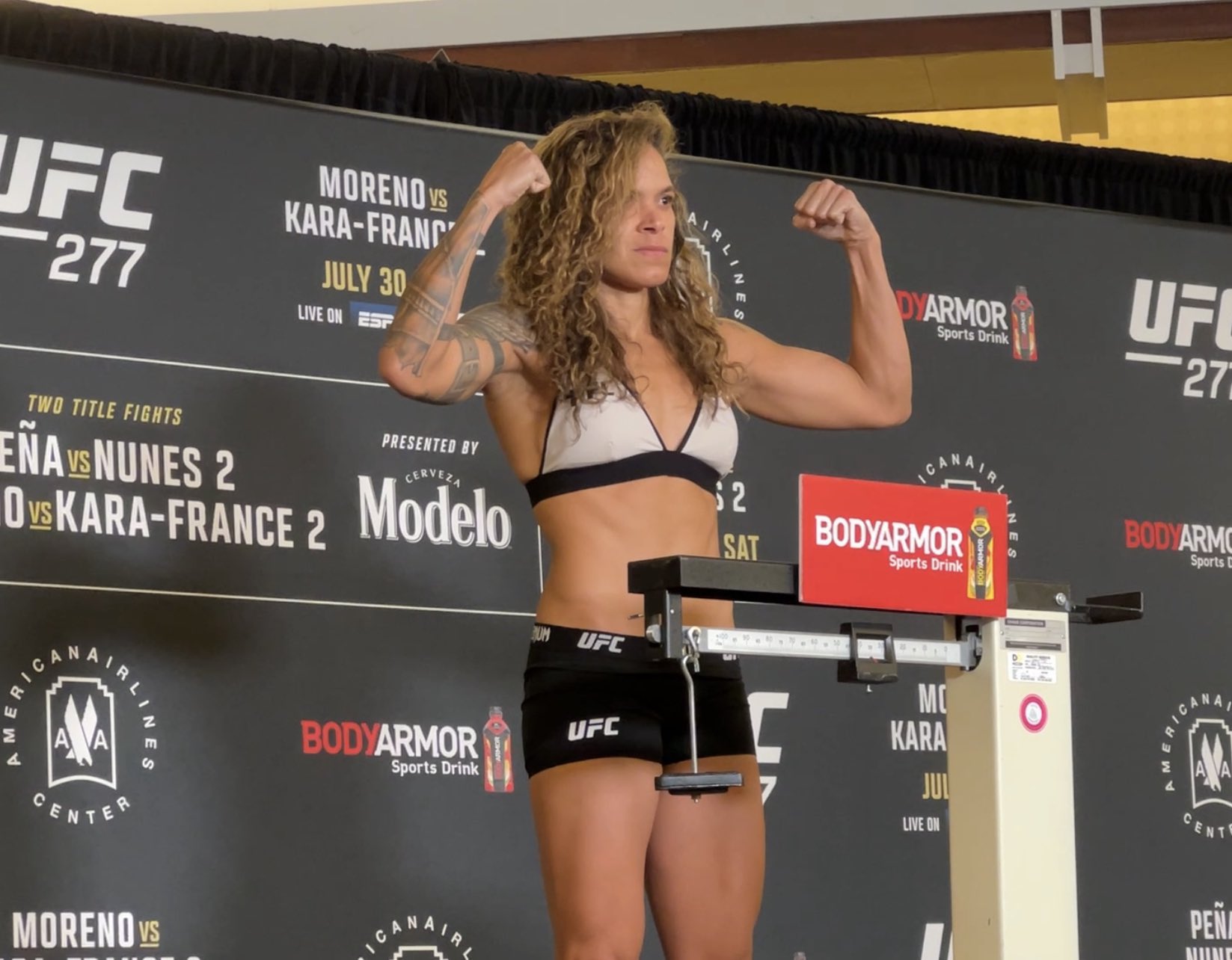 Not only do we have two BIG UFC title fights, they’re also both hotly anticipated rematches.

The night will of course end with the TUF Season 30 coaches, Julianna Peña and Amanda Nunes, where Peña will try and prove the first win wasn’t a fluke.

Before that, we’ll be treated to FOUR of the most dangerous flyweight fighters on the roster. The biggest matchup is of course the rematch between Brandon Moreno and Kai Kara-France for the interim title, but we’ll also see Alexandre Pantoja square off against Alex Perez. Right in the middle of those two matchups are the two heaviest hitters on the card: Derrick Lewis, back in his home of Texas, and Sergei Pavlovich.

This card will also bless us with a high profile light heavyweight matchup between Magomed Ankalaev and Anthony Smith, as well as an EXPLOSIVE brawl between Drew Dober and Rafael Alves. All of these matchups (plus more) are covered below and feature BLÜ’s predictions along with the Bet99 Sportsbook Odds.

On their quest for the next title shot at 205 pounds, number 4 contender, Ankalaev will be taking on the number 5 ranked contender, future hall of famer Anthony Smith. Since succumbing his first professional loss in his UFC debut to Paul Craig, Ankalaev has returned to his winning ways, now on an 8 fight win-streak. On that streak he’s taken down some of the top contenders including Ion Cutelaba (twice), Krylov, Oezdemir and, most recently, Thiago Santos.

Trying to shut down that win-streak and get back to another title shot, Smith has won 3 in a row, all of which have been 1st Round finishes. He’s also only fought ranked contenders for his last 10 or so fights including Jon Jones, Gustafsson, Oezdemir, Glover and Rakic.

I went back and forth on this matchup quite a bit. Smith has the skills to do some real damage to Ankalaev, especially if he can get the dominant position on the ground. His problem is that he tends to get hit quite a bit by fast strikers and gets controlled by heavy grapplers. Unfortunately for him, Ankalaev is both of those things. Smith will put up a good fight, but Magomed will probably pressure forward with jabs, clinch with Smith along the fence and control him there and on the ground to win a decision. If it were 5 rounds, I honestly think Smith would have a fantastic chance of winning this fight, but with 3 rounds to work with, Ankalaev holds a slight edge.

This fight will likely produce one of the next title contenders.

Ranked 4th in the division, Pantoja has solidified his spot as one of the most dangerous contenders with wins over Royval, Schnell and Kape and close losses to the champ, Figueiredo and another top ranked contender, Askarov.

With no fewer than SIX cancelled fights in a row, not fighting since 2020, Perez will (hopefully) return after a devastating 1st Round loss to the champ. Before that, he had gone 6-1 in the UFC, losing only to one of the greats, Joseph Benavidez.

This matchup is pretty much guaranteed to be absolute chaos. Pantoja is insanely dangerous everywhere the fight goes. He’s got strength, heavy strikes and unbelievable grappling. Perez also has fantastic striking and decent grappling, but doesn’t seem to be quite on the same level as Pantoja. That doesn’t mean he can’t get a win though.

Pantoja has a habit of getting hit by quick strikers like Perez, but always pushes through it with his own striking, following it up with HUGE takedowns. Perez is decent on the ground, but was caught in multiple submissions by Figueiredo and eventually submitted. With Pantoja’s relentless pressure and truly unbelievable grappling, I think he’ll grab a finish after an explosive opening round.

We’re probably looking at a HUGE KO coming in this matchup, the question is… who’s going to grab it?

Lewis has been having a rough time recently, going 1-2 with an EASY 1st Round KO over Daukaus and bad losses to both Tuivasa and Gane. Pavlovich doesn’t have all the high-ranked UFC experience that Lewis has, but he’s done well with three 1st Round KOs in a row leading up to this weekend.

This is by far the most unpredictable matchup on the card. When you’ve got two heavyweights with one-punch power, anything can happen. The difference here is their skillset and… the crowd! Lewis will once again fight in front of Texas. That hasn’t gone well in his last couple of trips here, but now he’s got exactly what he wants: a three round fight against someone who doesn’t wrestle.

Pavlovich has some heavy hands and a lot of reach, but Lewis is quick and as soon as he gets in close… it’s usually over. This is the UFC’s way of giving Lewis another KO win in front of his biggest fans. It may backfire if Pavlovich can land something huge, but Lewis has more power and more skills.

After only seeing flyweight titles between Moreno and Figueiredo since 2020, we’ll finally see a new face in the mix: Kai Kara-France.

After a draw in his first title shot against Figueiredo, Moreno came back and grabbed a SHOCKING submission to become the new champ. Sadly, after that he came back and lost in a TIGHT decision.

Kara-France has also done very well recently with two 1st Round TKOs and a decision win over Askarov in his last 3 bouts. He’s only lost twice in the UFC with a submission loss to Royval and a decision loss to none other than his opponent this weekend, Brandon Moreno.

KKF has proven himself to be a dangerous striker recently and has improved every area of his game… but Moreno is just on a different level. Considering Moreno just had 3 fights against one of the most dangerous flyweights in MMA history, there’s no way KKF can give him anything he hasn’t seen. Moreno is going to get hit a lot, but he’s also going to dish it back and eventually move the fight to the ground.

That’s where Kai will have the most problems. He should be able to hold on for a couple of rounds, but as the fight moves on, Moreno will keep going for submissions and he’ll probably get one. Every time Kai fights a grappler, he gets stuck in submissions. As I said, he should be able to defend for a while, but this is a 5 round fight with someone who submitted Figueiredo.

After 7 months and a heated season of the Ultimate Fighter, we’ll finally see if Julianna Peña can get it done again and permanently dethrone one of the greatest female fighters in history.

After winning her own season of TUF, Peña has gone 6-2 with losses to Shevchenko and de Randamie and wins over Eye, Zingano. Of course, she beat Nunes in their first meeting last December.

Not much needs to be said about Amanda Nunes; since losing to Zingano in 2014, she hadn’t lost up until her last fight with Peña. That included 1st Round finishes of Tate, Rousey, Holm, Cyborg and Megan Anderson as well as two wins over Valentina Shevchenko.

After their last meeting, who knows what to expect here. There are a lot of different theories as to what happened last time, but I’m of the belief that Nunes just really didn’t take Peña seriously at all and paid the price. She absolutely dominated Peña in the 1st Round and even almost finished her in the second.

Since joining the UFC in 2017, Klose has been a dangerous contender. He’s beaten Diakiese, Bobby Green and Giagos, while his only career losses have come to Dariush and David Teymur. Originally he was supposed to fight Diego Ferreira, but García stepped in late to replace him.

Garcia doesn’t have as much experience, but he’s done fairly recently with a 2-2 record since joining in 2021. In that time he’s lost in decisions to Haqparast and Gruetzemacher and followed it up with two wins.

This one is shaping up to be a pretty explosive fight with two evenly matched guys. It’s difficult to pick a winner here because they’re both very similar. They both have good standup and good wrestling, but haven’t had a breakout win yet. The difference that I’ve seen in their fights is that Klose seems to be just slightly better everywhere. He’s also got an INSANE clinch game. It’ll be close and either man has the chance to edge ahead, but Klose is the safer bet.

There’s absolutely no doubt that this matchup will produce some of the best action of the night. In Drew Dobers’ last fight, you may remember watching one of the WILDEST opening rounds in combat sports history against Terrance McKinney. He grabbed the win… but it was hard fought. Before that, he had just slipped out of the rankings with losses to Brad Riddell and Islam Makhachev.

Alves only has two fights since winning his contract on the Contender Series. But he’s been VERY dangerous, losing a decision to Ismagulov and submitting Diakiese in the 1st Round.

Both of these guys are explosive and EXTREMELY dangerous, but Dober is the much more reliable fighter here. Dober is probably the toughest person I’ve ever seen and we all saw that against McKinney. He’s also got the cardio to go hard all 3 rounds, pounding you with HUGE shots. Alves has a distinct chance of getting an early submission, but if Dober can avoid that, he should be able to grab a finish with his insane power.

Here I highlight some betting lines that you might want to take advantage of for UFC 277. These are odds that favour the bettor. Although some of them may conflict with my picks, they offer a fair reward for a slight bit of risk.

I’m honestly not sure why Morono is even an underdog here. He’s fought the tougher opponents recently and has beaten most of them. He’s also one of the most technical fighters in the UFC. He’s extremely smart and adjusts the way he fights to his opponents. Semelsberger has had problems defending takedowns and Morono will 100% take advantage of that. It probably won’t be the most exciting fight, but it’s most likely going to end in a win for Morono.

The Underdog: Derrick Lewis at +112

These odds are purely a reflection of Lewis’ recent loss and Sergei’s winning streak. What that doesn’t show is the fact that Lewis has the most knockouts in heavyweight history and he’s got more than just one move. On the other side, Sergei really only seems to have one attack and he hasn’t beaten the same calibre of opponent. They both have a KO chance, but how could you not favour the knockout king, especially in his own backyard of Texas.

The Underdog: Julianna Peña at +214

I still believe Nunes will come in and annihilate her, but, statistically speaking, Peña has the edge. In most cases, the winner of the belt wins when there’s an immediate rematch. It may be the case that Nunes just didn’t really show up last time and didn’t take her seriously, but, that aside… she did grab a finish. I may have way more confidence in Nunes, but at +225, it wouldn’t be a terrible idea to put some money on Peña.