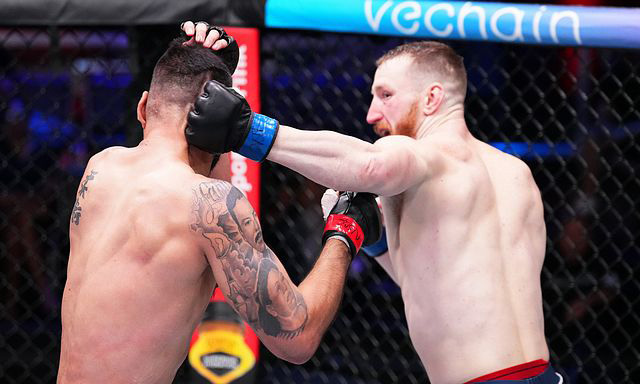 It wasn’t the start to Dana White’s UFC Contender Series that any of us were hoping for. Usually, we’re treated to five or six WILD fights and we get a few new exciting additions to the roster. Instead, the event started with one fight being cancelled due to a 10-pound weight miss, leaving only four fights on the card. We then saw three men take a victory on the big stage… but none of them made enough of an impact on Dana White (or the audience) to get a contract. After all that though, Joe Pyfer closed out the night with the only finish of the card, also grabbing the only contract of Week One. All the fights, along with the BLÜ’s Power Rankings for the night, are described below.

Even though these two guys are flyweights, they started off pretty slow, waiting to see what the other man was trying to do. After a couple of kicks from a distance, the real action started with a minute left in the 1st Round with Costa landing a big combo and Luna responding with a combo of his own. Things picked up a little bit in the 2nd Round as Costa pressured forward a little harder, but neither fighter had a significant moment up until then. Luna was doing a good job of avoiding the strikes of Costa but wasn’t landing anything significant himself. Just as the 2nd Round was closing out, Costa landed a BOMB that dropped Luna on his back. He recovered surprisingly well and even managed to reverse Costa to find the dominant position on the ground.

At this point Costa was either up two rounds or tied; with that 1st Round being so uneventful and close, it was unclear what the judges would have done. Costa carried that momentum in the final round and hit Luna with some HEAVY ones, stumbling him backward. Luna went in for a takedown to get some offence going but was immediately shut down. From there, Costa kept his striking going for the rest of the final round and seemed to clearly win the decision. The judges scored it 30-27, 29-28 and 29-28 for Costa.

Costa looked great in this fight and certainly has the potential to eventually do some real damage in the UFC, but, personally, I wouldn’t be awarding a contract here. This is reinforced by the fact that this ended up being a split decision, plus the fact the UFC has a LOT of exciting flyweights. I’d like to see Costa take a couple more fights and come back.

Unlike the first fight, these two guys jumped right in with their strikes. Romero landed a nice one, but Buzukja followed that up with a flurry of his own combos. Wanting to avoid that striking, Romero then pushed Buzukja along the fence, working for a takedown. The rest of the round was spent along the fence with Buzukja pinned there. It’s hard to score a round like that; you’d think Romero may have grabbed it with all the control time, but Buzukja had a lot more damage.

The 2nd Round started the same with Buzukja landing a HUGE combo and Romero pinning him along the fence. As soon as they separated, it was pure striking dominance from Buzukja. He landed a MASSIVE shot that dropped Romero to his knees and had him wobbling all over the place. Romero responded with some laboured takedowns but really couldn’t get anything going. As opposed to the 1st Round, this one was pretty clearly in favour of all the damage from Buzukja.

Buzukja kept the pressure going into the final round. Interestingly, Buzukja started some grappling of his own this round, pinning Romero into the fence and grabbing a nice takedown. He couldn’t keep him down but it certainly sent a message. From there he started to get some BIG shots going along the fence. Then it was Romero that was starting to land some big shots. Finally, after two and a half rounds, Romero got his takedown and threatened some… interesting submissions. Sadly for him, Buzukja got out and reversed positions. It was extremely close, but I’d give Buzukja the slight edge in the decision. The judges were unanimous this time, giving it 29-28 to Buzukja.

It was quite the fight to watch, but neither one of these guys could really compete at the UFC level. If Romero faced a striker he’d get finished and if Buzukja faced a grappler he’d get controlled and probably submitted. As a result, I probably wouldn’t have given the contract here either. That being said, the featherweights need more people and he could be an exciting addition.

Acacio opened with a HUGE shot to the chin of Turkalj. It didn’t seem to rock him too hard but he responded by pushing dos Santos to the fence and taking him down. He couldn’t keep him down, but he was sticking to him like glue along the fence on his back. After a few minutes of that, Turkalj finally put him down to the canvas. Sadly, once again, dos Santos got back up. It wasn’t the most exciting round, but Turkalj controlled the action the whole round and closed it out with a couple of heavy, quick shots.

Dos Santos opened with some HUGE shots once again, landing some more clean shots. Once again though, Turkalj went for his grappling, this time getting him down multiple times to the mat. Over and over again, whenever they separated, dos Santos was landing HUGE shots straight to the chin of Turkalj. Near the end, finally Turkalj managed to get the fight to the ground for an extended period of time. He had Acacio’s back, peppered him with small shots and worked for a submission. After two, I’d have probably said it was tied with Turkalj winning the opening round and Acacio winning the second.

With dos Santos possibly slowing down, Turkalj landed an early takedown this time. He still wasn’t doing a whole lot of damage or threatening submissions, but this round was ALL Turkalj thanks to all the control time. The judges agreed, scoring it 30-27, 29-28 and 29-28 for Anton Turkalj.

Once again, I just don’t think either guy is ready for the UFC. Turkalj has a great, exciting personality and great takedowns, but he didn’t really do any damage throughout the whole fight, landing only 9 significant strikes.

Joe Pyfer def. Ozzy Diaz by KO in the 2nd Round

Pyfer made the first move, landing a HUGE calf kick that had Diaz wobbled early. From there, Pyfer ran in and dragged Diaz to the ground. He started to work for some different submissions, locking up a pretty deep one from Diaz’s back. He got out of it but was still being controlled by Pyfer. As the round continued though, Diaz managed to reverse positions and stand back up. Both guys were pretty even on their feet, trading jabs for the rest of the round. It was tight, but you’d imagine Pyfer easily grabbed the opening round.

Making the first move once again, Pyfer landed a BIG hook that had Diaz stumbling backward. After some back-and-forth striking, Pyfer landed an absolute NUKE of a left hook that dropped Diaz on his back immediately. He wasn’t sure if he should follow up with some shots, but he did and put Diaz to sleep, slamming Ozzy’s head into the canvas with ground and pound.

This was the only case where I knew a contract would be handed out. Pyfer came in for his second DWCS appearance after dislocating his elbow and got a HUGE win.

Just as I was saying myself, Dana made it VERY clear that Pyfer was the only one who really showed up tonight. I thought Dana may have given the chance to Costa or Buzukja to fill out the division a bit more, but as I said, you need to do more than just win a boring decision.