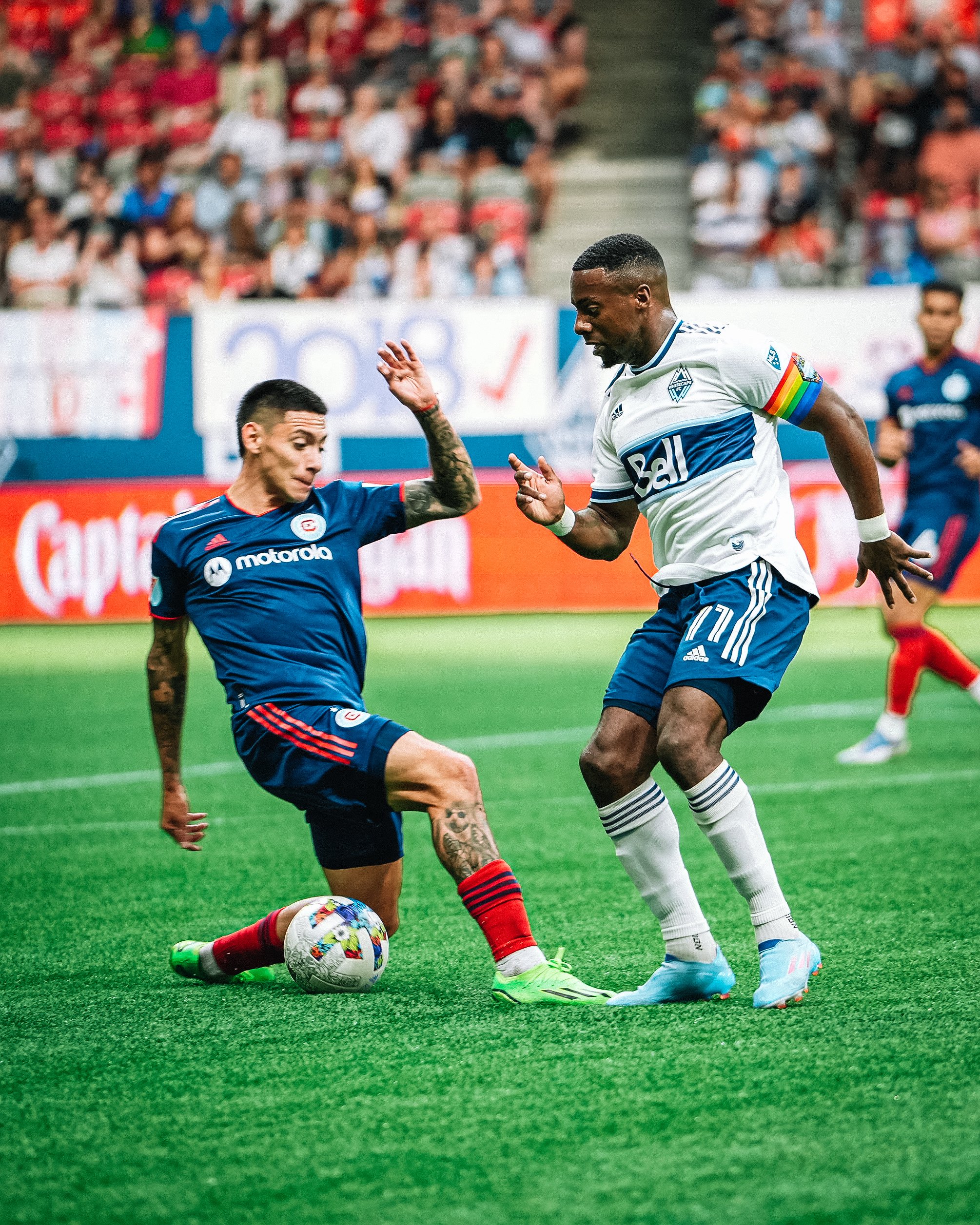 The Vancouver Whitecaps take pride in BC Place being a fortress. However, the Chicago Fire came in without fear and played the home side off the pitch.

It was a difficult night for the Whitecaps as they fell to the visitors, losing a clear opportunity to move up the table and to gain some needed focus before an even more important match in a few days.

Vanni Sartini had to have a lot on his mind when coming up with a solid lineup for this match while also thinking ahead to Tuesday’s Canadian Championship against Toronto FC.

That was evidenced by Julian Gressel’s start at right wing-back. The German-born player has not even been with Vancouver a week and he was already being called on.

Isaac Boehmer also started again in goal after his solid match last weekend, which earned him a spot on the MLS Team of the Week bench.

Florian Jungwirth drew into the centre of the back line. Ranko Veselinović was on the bench, likely being rested. Jake Nerwinski and Javain Brown finalized the back 3, which emphasized Sartini’s line juggling. This is also Brown’s first match back after his collision with Cody Cropper.

Russell Teibert was also on the bench to start this one. The Canadian midfielder will be considered Canadian-born requirement for Tuesday’s match, so this is likely to manage that and little else. Leonard Owusu started alongside Andrés Cubas.

The only other notable change was Pedro Vite in for Ryan Gauld as an attacking midfielder. He has done well with the time given to him over the last month.

Lucas Cavallini was put in to lead the line. He was also on a potential yellow card suspension, which is something Sartini would need to manage.

With the number of changes to the starting squad and the inclusion of new players, structure and organization would be key. Early on, the Whitecaps were playing to their strengths, allowing Chicago to hold the bulk of possession, but forcing them to the outside and away from dangerous positions.

The Whitecaps were able to make the most of their transitional game plan. Gressel showed his playmaking ability in the 7th minute, coming in dangerously towards the 6-yard box. But he opted to pass to Cristian Dájome instead of shoot. The Colombian international’s shot ringed off the crossbar.

But it would be the Fire to hit first. Xherdan Shaqiri intercepted Brown’s poor throw-in and carried it towards the 18-yard box. His low, hard shot beat Boehmer on the left, giving the Fire the lead in the 13th minute.

The goal helped Chicago settle into the match. Their pace quickened, both in player movement and ball control. Time and time again, they found themselves in dangerous positions just outside the 18-yard box.

Chicago had plenty of opportunities to add another. In the 37′, Mauricio Pineda hit one hard off the far post. The rebound caught Marcus Godinho off-guard and almost bounced in. But it went to the other side of the post, to the sigh of relief from the wing-back.

Cavallini has a chance to tie it up just before the half-time whistle. He got a toe on the end of a Vite pass into the box, but all he could do was redirect it. Gabriel Slonina, Chicago’s goalkeeper had little difficulty in grabbing it.

The half ended with the Whitecaps having a lot of work to do.

The return after the half saw three substitutions for the Whitecaps. Tristan Blackmon, Gauld and Teibert came on for Brown, Gressel and Cubas. It could be read as an attempt to spark some life into the squad or some man management ahead of the Canadian Championship final.

And it gave them the spark they needed. In the 54′, Godinho got on the end of a beautiful switch play pass on the left flank. He crossed it back in for Gauld, who put the ball on a platter for the open Cavallini in the six-yard box. The Canadian striker made no mistake, netting himself his seventh of the year and tying the match.

Both teams pressed for chances, but substitutions forced changes to tactics. Chicago struggled to find the level of possession and dominance they had in the first half, and the ‘Caps struggled to find consistency in their attack.

In the 73′, Godinho caught his foot in the turf and was forced off. BC Place’s fake grass claimed another victim.

A couple of minutes later, Dajome grabbed the ball on the right at pace. His cross into Gauld was pinpoint. The Scot carried the ball back into the box and almost beat the keeper, but the Fire’s defence was there to claim any second chance.

But a missed opportunity for the Whitecaps was a gain by Chicago. They carried it forward, getting the ball deep and to the left of the goal. The cross found the head of Rafael Czichos, who put the Fire back ahead in the match with 14 minutes left.

Chicago would get one more in the 90th minute. Chris Mueller took a pass from Shaqiri as he came into the 18-yard box. He cut inside to shoot off his right foot and curled it past Boehmer for the Fire’s third of the night.

And that’s how it would end, with the Whitecaps outplayed by the Chicago Fire. It could have easily been more than the 3-1 score line that played out.

Sartini did not mince words when talking about the performance.

“Tonight was our worse performance of the season…the first half was really bad,” he said.

He said he was not sure whether players were thinking ahead to the Canadian Championship match or if it was something else, but he reiterated that the lack of competitiveness and organization was worrying.

Godinho said that right from the beginning, it felt as though the entire team was asleep.

“We came out asleep, to be honest with you,” he said. “You obviously look forward to the cup game, but guys were too focused on that.”

Cubas in the first half helped to keep Chicago with only a single goal. Gauld in the second helped the Whitecaps to get a goal. But they need to work together as both players have very defined roles.

The Canadian Championship final looms large this week. The match is at BC Place on Tuesday, July 26 at 7:30 p.m.