Whitecaps battle to 1-1 draw against the Portland Timbers 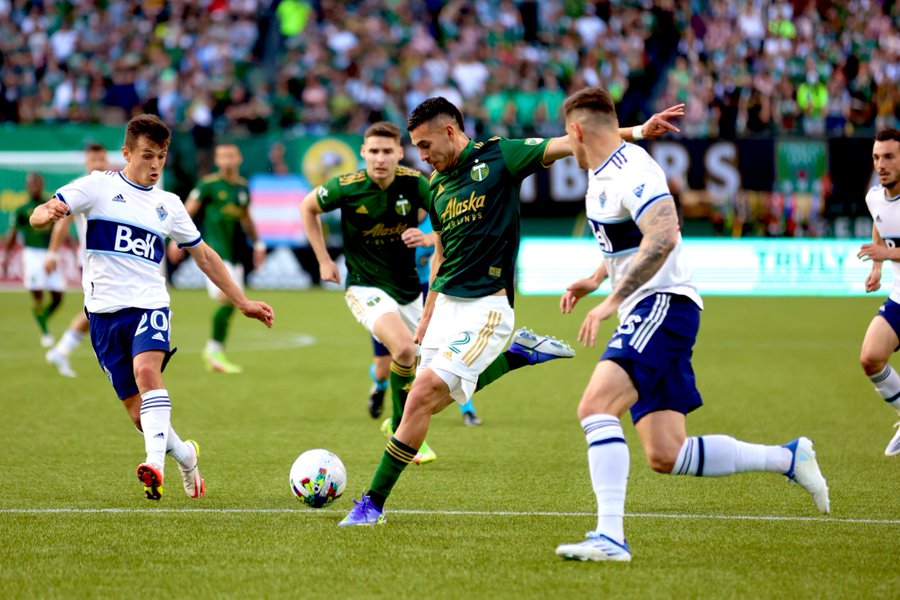 The Vancouver Whitecaps played visitor to the Portland Timbers for MLS Rivalry Week in a fitting Cascadia match. The ‘Caps, who sit last in the Cascadia Cup standings this year, wanted to grab much-needed road points and boost their chances in the overall Western Conference standings.

Head Coach Vanni Sartini had some forced changes to his lineup after injuries from the last match against Cincinnati. But changing his lineup is something he is accustomed to.

After his commendable deputation in Cincinnati, Isaac Boehmer was given first first-ever start in goal for the first team. Both Cody Cropper and Thomas Hasal continue in their work towards recovery, which gave Boehmer and his backup, Max Anchor, the opportunity to be the ‘Caps last line of defence.

Ranko Veselinovic was healthy after missing out in Cincinnati with a non-COVID related illness. His spot in between Tristan Blackmon and Jake Nerwinski seems to be a lock whenever the Serbian is good to go.

Javain Brown is also recovering after the dangerous collision between him and Cropper, which let Nerwinski draw back into the lineup. Andrés Cubas was also back in, adding some much-needed stability in the middle of the park.

The attacking side of the starting squad was similar to the Cincinnati game, with only Brian White starting for Pedro Vite.

The Whitecaps knew coming into this match that even a point would be tricky. While it was true that Portland was only a point above the Blue-and-White in the Western Conference standings, they are undefeated in their last five matches. They also sit at the top of the Cascadia Cup standings, something that Vancouver would like to change.

Jaroslaw Niezgoda is currently on a roll right now for the Timbers and is the opponent to watch. In the last four matches, he has four goals and an assist. Remember, he scored against the Whitecaps in April in a match Portland took 3-2 at BC Place.

It was a quick start to the match, with Portland looking to put their stamp on the game early. The Timbers were looking to hold possession, but also to move the ball quickly.

It was not until the 11′ that Boehmer was called into service. Teibert attempted to cut off a pass out to the left, but missed it. It allowed for Portland to move quickly without the Whitecaps’ midfielder present. Santiago Moreno got on the end of the shot, but it was an easy save for the B.C.-born goalkeeper.

The first potential opportunity for the ‘Caps came in six minutes later. Cubas popped the ball to the right where Teibert was already on his bike. He carried the ball into the 18-yard box, but his final touch was heavy and sent the ball out of play.

Boehmer was strong again halfway through the first half. His dive to the low right was quick enough to palm the ball to the other side of the post. He was looking calm and collected for his first start.

But despite their lack of shot on net, it was the Whitecaps who struck first. Ryan Raposo crossed the ball brilliantly into the box for the diving Brian White. His header gave the ‘Caps a much-needed punch in the arm and the lead just past the half-hour mark.

Portland attempted to mount a resurgence as the teams headed into the half, but they had nothing to show for it. In all, the Whitecaps were deserving in their lead.

As the two sides faced off to start the second half, the Whitecaps almost got one early. White got a quick pass in the 18-yard box and had a quick shot. It was saved, but Ryan Gauld had a rebound. The goalkeeper made the save again, to stop the embarrassment.

Portland, knowing they had to turn things around, began to push forward. The back 3 and Boehmer were strong to counter the assault, but their work was made especially difficult by some missed clearances by the midfield.

Both teams were fighting hard as the hour mark came up. Nerwinski had two good challenges to save the Whitecaps from a goal. The first was a clean, hard tackle against Chara. The second was to separate Neizgoda from the ball in what would have been a clear opportunity.

Boehmer made what was perhaps his best save of the night in the 77′. Portland shot from close in, just outside the 6-yard box, but the young Canadian goalkeeper reacted on instinct, jumping high and palming the ball over the crossbar.

But the Timbers would ultimately get their goal in the 82′. Blackmon took down Niezgoda in the 18-yard box, a gentle push from behind, but an easy call for the referee to make. The kick from the spot was hard, hitting the mesh behind Boehmer.

Portland continued to pile it on as the clock wound its way to 90′. The Whitecaps were forced repeatedly to defend, often with 11 men behind the ball.

The Whitecaps held off the late-game onslaught. They would have enjoyed the win, and they were deserving of it on the night. However, they would have to settle for the 1-1 draw and a point at Providence Park.

Sartini was happy with the overall performance of his players, but he was left wanting by the result.

“We are a little bit frustrated at the end with the tie because we deserved to win…it’s a very good performance,” he said.

On the performance of Boehmer in his first MLS start, the head coach had lots to praise.

“Isaac was very good,” Sartini said. “We asked him to keep it simple, and he did. It would have been the icing on the cake for him to save the penalty, but we can’t ask too much from him.”

White concurred with his coach, saying they were happy with the point, but felt that it could have been three.

“We’ll take it and prepare for Chicago,” he said.

Boehmer, who had turned down interview opportunities earlier in the week, said his full concentration was simply on preparation. He apologized for saying no to the interviews, in true Canadian form.

He was happy with his performance and said the coaches and other Whitecaps goalkeepers, Hasal and Cropper, gave him good words and confidence to play.

The back line was strong in helping Boehner protect the net, putting up a total of 27 clearances on the night. Portland, for comparison, had 17.

It was encouraging to see the Whitecaps battle hard at Providence Park, a notoriously difficult stadium for visiting sides. The fact that many players, coaches and fans will feel they should have got more from the game is a good sign of things to come indeed.

The Whitecaps head back to Vancouver to prepare for next weekend’s match against Chicago. The game is on Saturday, July 23 at 7 p.m.