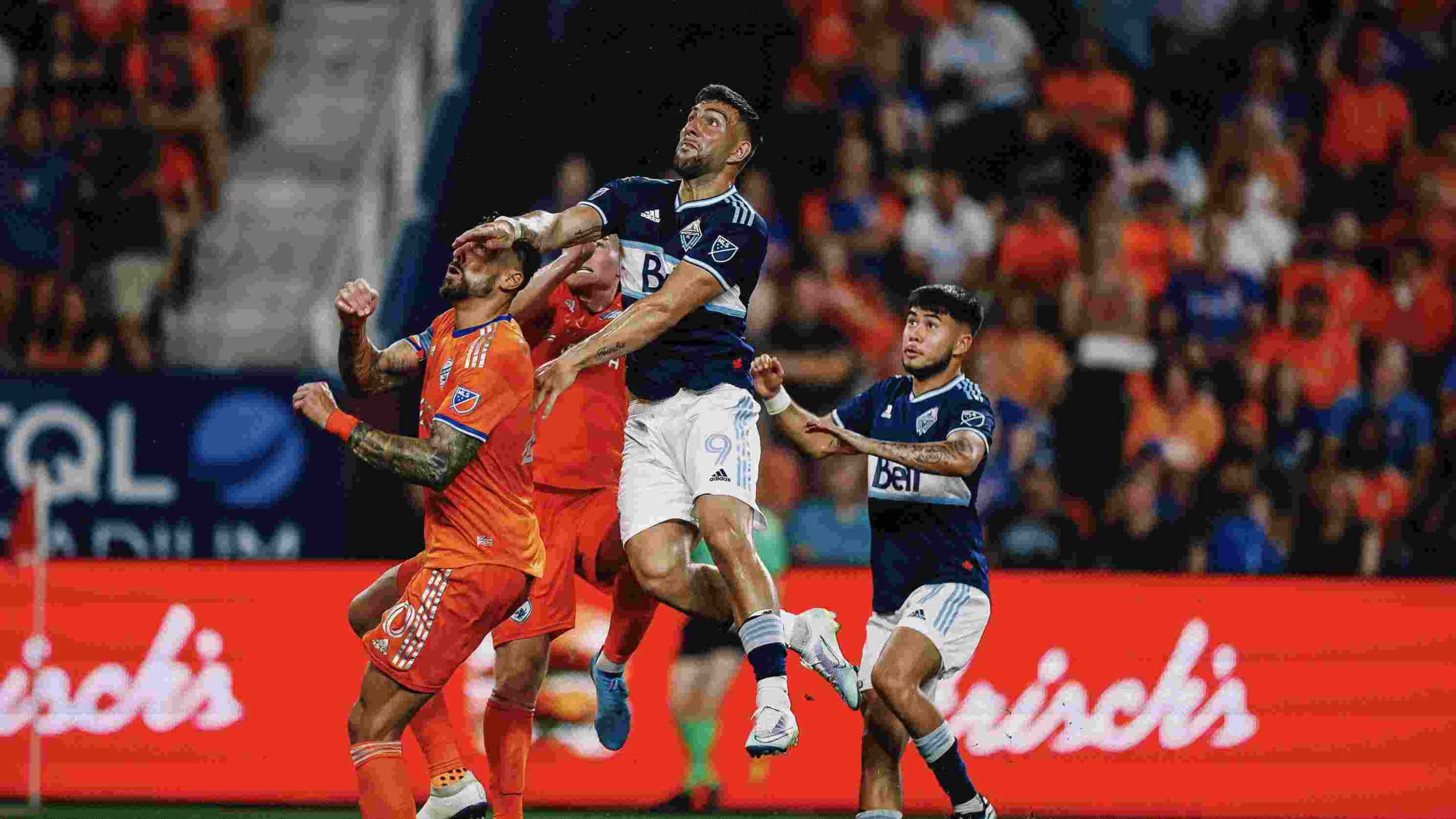 After a very disappointing 3-1 home loss to Minnesota United, the Vancouver Whitecaps started a two-game road trip. The first stop was the Cincinnati AKA the Queen City.

Prior to the match, the Whitecaps where three points behind Nashville SC for the final playoff spot. Three points would be huge.

The interesting part was the midfield. Ryan Raposo and Cristian Dájome are not the surprising part, neither is Russell Teibert starting. Florian Jungwirth was in the midfield with Teibert.

Now, Jungwirth was in the midfield for a few games in late May and early June but that was a as a lone number 6. Without Cubas, the midfield looked questionable.

It was good to see Pedro Vite start with Ryan Gauld who has had a good in the two games since he started playing again. It was also nice to see Erik Godoy on the backline.

Lucas Cavallini was the lone striker and up front and let’s see if he can continue his run of scoring goals.

Vancouver was also looking for just their third road win of the MLS season. The Whitecaps had nine injured players heading into the match and could they overcome the adversity? Let’s find out.

It was not a good start for the Whitecaps.

However, the Whitecaps responded quickly.

Ryan Gauld got his third goal of the season as he tipped in Dajome’s pass. It was a good counter attacking play which was led by the likes of Raposo and Cavallini. The defending from both sides was not good early.

The Whitecaps don’t score a lot in the first half and it was great to see them do so. According to the TSN broadcast, they were last in the league in first half goals.

Teibert looked shaky soon after has he lost the ball to Brandon Vazquez but he was stopped by Cropper. Turnovers in their own end hurt them against Minnesota and the Whitecaps just cannot let that happen again.

Cavallini was getting involved early as he picked up the lose ball from Raposo’s corner but it hit the bar and went out. That chance gave the Whitecaps a bit of confidence as they were passing the ball with accuracy.

But Cincinnati made the Whitecaps defence look silly in the 23rd minute. Brenner showed some good pace and outran Jungwrith and Vasquez crept behind Godoy and got his 10th of the season past Cropper. It was looking like a long night for the Whitecaps back line especially since Vasquez and Brenner were running through them so easily.

There was a scary moment in the 32nd minute as both Cropper and Javain Brown were going after the ball. Both collided into each other and fell hard. Cropper spun in the air and landed on what looked like his head and neck. Brown came off the pitch with a towel to his eye. Jake Nerwinski came off and Brown was a concussion substitution.

Brown was one of the better Whitecaps defenders in recent games and that is another tough loss for them.

Cropper was down on the pitch for awhile but was responding to the medical staff. Somehow, he was able to continue. That is very surprising especially considering how he fell.

The Whitecaps needed more of that offensive spark that led to Cavallini’s goal. They kept losing the ball easily and the man marking has been poor.

Cropper came off as a concussion sub and Isaac Boehmer was making his MLS debut under the crazy circumstances. It was a miracle that Cropper was still standing after that collision but it was better for him to come off and get checked out.

FC Cincinatti continued to pressure the Whitecaps with their attack.

Both teams squandered counter attacks as Brenner displayed good speed but his shot was blocked by Godoy. Gauld turned on the jets himself and passed the ball to Cavallini but he probably should taken the shot instead of trying to pass it back to Gauld. That was another missed opportunity.

The defending steadily improved. They were forcing offsides and making big blocks particularly from Tristan Blackmon.

The attack once again is missing the final pass. There was a frustrating instance where Raposo played a through ball for Cavallini but he wasn’t ready for it. The ‘Caps need to focus on shooting the ball inside the 18-yard-box and getting set up for the final pass.

Boehmer faced his first big test with as Barreal’s free kick was curving but the 20-year-old keeper managed to get his finger tips on it. Good to see Boehmer being calm under the pressure.

Michael Baldisimo came on for Godoy in which looked to be a tactical sub by Sartini. Baldisimo was doing a good job of winning the ball and he made a nice pass to Gauld who gave it to Brian White but he couldn’t get a good ankle on his shot.

Baldismo’s defensive game needs to be worked on, yes. His passing? It is very good. That pass to Gauld was a reason why.

Cavallini came off for Tosaint Ricketts who made a big impact as he came on. After a good save by Boehmer, the Whitecaps went on the counter and Ricketts cut back to Dájome who beat Roman Celentano.

The transitions seemed to be the weapon for the Whitecaps in this game. Ricketts has proven to be their “super sub” as he played less than 180 minutes this season but has scored two goals and managed an assist. His late game contributions have been massive for Vancouver.

FC Cincinnati wanted the winner but Boehmer came up big again. He managed to stop a very tough header from Sérgio Santos. Keep an eye on this kid ‘Caps fans.

Both teams settled for a single point. There were a lot of blunders but despite the injuries their never quit attitude continued.

Sartini talked about the scary collision between Brown and Cropper. He said that Cropper wanted to continue the match but his head was pounding and they took him out for Boehmer as a concussion sub.

Sartini called the game a “tale of two halves” and wasn’t impressed with the first half but he was with the second half.

“In the second half, we did much better and made some adjustments and they couldn’t beat our midfield…but we had to create more chances and we switched to a 4-4-2,” he said.

The Whitecaps head coach was also very proud of Boehmer in his MLS debut.

“We know Isaac is a kind of a cool cat, he maintained his composure, I think he started the second goal,” said Sartini. “I’m very happy for him…I’m happy that he did very well.”

He also praised the substitutes.

Ricketts talked about his role as a sub.

“My role is to come in when the team needed me late and games and to provide a spark…I’m just happy to get a big point for the team.”

Through an interpreter, Dájome talked about how he has been in different positions all year.

“I help the team wherever I can, wherever the team needs me, whether the side, it’s up to the coach…I’m just doing what I can to help the team,” he said.

Gauld let all Whitecaps starters with a passing rate of 89.7%. Caio Alexandre had a 100% passing rate coming off the bench.

The Whitecaps now have 25 points which are two behind the Los Angeles Galaxy for the final playoff spot. At the time of this writing, the Galaxy are losing 3-1 to the San Jose Earthquakes. Other notable games in the Western Conference playoff race included the Seattle Sounders losing 1-0 to Nashville SC, FC Dallas losing 1-0 to New York City FC and Minnesota United drawing 1-1 with Sporting Kansas City.

The Whitecaps will face the Portland Timbers at Providence Park on Sunday who are one point above them. Kickoff is at 7:30.