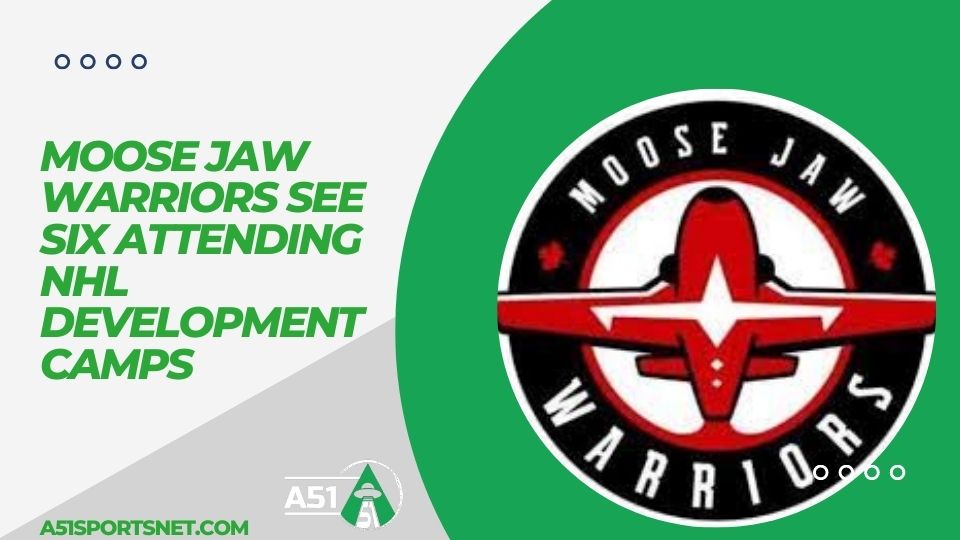 Denton Mateychuk, who was drafted 12th overall by the Columbus Blue Jackets in the 2022 NHL Draft last week, is attending the Blue Jackets Development Camp in Columbus, Ohio. Mateychuk had 64 points in 65 games and was the East Division’s WHL Defenceman of the Year. He is a very involved player, known for his skill with the puck and an eye for the net.

Another 2022 NHL draftee, Jagger Firkus was selected 35th overall by the Seattle Kraken, and is attending the Kraken’s training camp in Seattle, Washington. The forward recorded 80 points in 66 games played last season and was recognized as the Player of the Game in the 2022 Kubota CHL/NHL Top Prospects Game. His creativity on the ice is one of the most commented on aspects of his game — he’s very clever, and knows how to beat both defencemen and goaltenders with ease.

Daemon Hunt, the 2021-22 captain of the Warriors, is attending the Minnesota Wild’s development camp in St. Paul, Minnesota. He was drafted by the Wild 65th overall in the 2020 NHL Draft, and signed with the team in 2021. Hunt exhibits a lot of power on the ice, with intricate skating and strong physicality, and had 39 points in 46 games played last season.

The New York Rangers drafted forward Ryder Korczak 75th overall in 2021, and he signed a three-year entry-level contract with the team in 2022. With 79 points in 66 games with the Warriors last season, Korczak showcases incredible skill and vision on the ice. Corey Pronman of The Athletic states, “Korczak is a highly skilled player who can skate very well and make plays, and that adds to the intrigue.” The center is attending the Rangers’ development camp in Terrytown, New York.

Drafted by the Calgary Flames 141st overall in 2021, Cole Jordan is in Calgary, Alberta for the Flames’ development camp. The defenceman is known for his impeccable skating, which was said to be “closer to perfection than average” in the 2021 NHL Draft Guide. Although he’s not overly physical, he does know how to utilize his size effectively. Jordan had 11 points in 36 games played last season.

Maximus Wanner, selected 212th overall by the Edmonton Oilers in the 2021 NHL Entry Draft, is in Edmonton, Alberta this week for the Oilers’ development camp. During the 2021-22 season, the defenceman had 25 points in 55 games played. Noted for his impressive skating ability, the nineteen-year-old will have a chance to develop his skills even further.

The Warriors’ training camp will be in late August, before the pre-season kicks off against Swift Current in September.