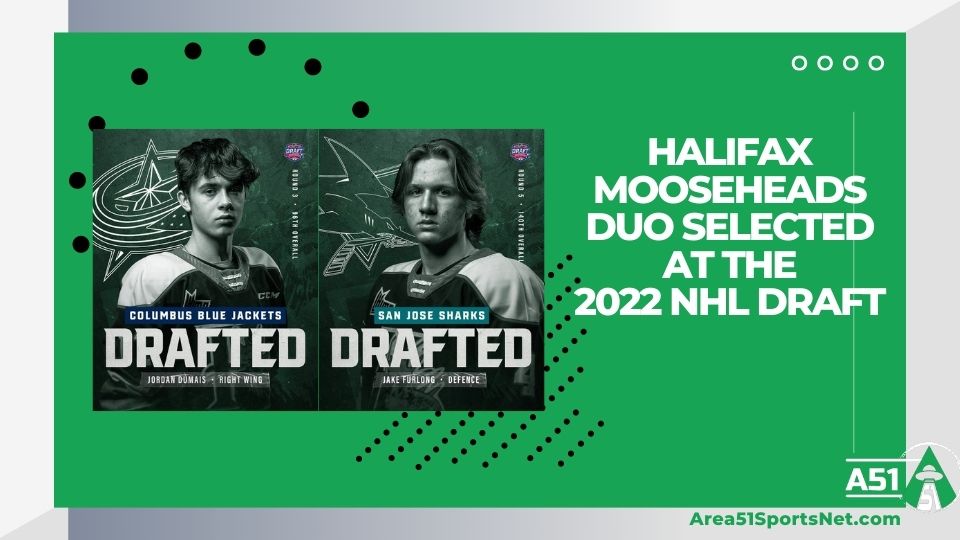 The Halifax Mooseheads saw two of their bright young stars get selected at the 2022 NHL Entry Draft in Montreal this past week, just one shy of the three they saw walk up to the stage in 2021.

The environment in Montreal was very exciting for these young players, especially being the first NHL Draft to be held on-site since the onset of the COVID-19 Pandemic.

Jordan Dumais was the first of the two Mooseheads to hear their name when the Columbus Blue Jackets selected him 96th overall to wrap up the third round Friday morning.

“All I cared about was what team I would end up going to,” said Dumais. “It ended up being the Blue Jackets and I could not be more excited. They have a good young core that I feel I will fit right in to.”

Dumais was left off the roster for the CHL Top Prospects game this past year, ultimately fuelling a second-half resurgence, which put his name higher on the draft boards for many scouts and NHL teams.

“It’s the opinion of a few people,” said Dumais. “If they were really good scouts, they would be working with an NHL team. It doesn’t bother me too much, because at the end of the day it’s the draft that really matters.”

The 5-9 forward used the omission as motivation to bring his game to a whole new level, setting the franchise record for most assists in a game with six, and finishing the year with 109 points through 68 games played. A feat not captured by a large number of 17-year-olds in the CHL.

Jake Furlong was the second and last Moosehead to hear his name called when he heard the San Jose Sharks gave him the call with the 140th pick in the fifth round.

Furlong, a local product of the Mooseheads, has had a long winding road leading to this point in his career. Missing out on key developmental years due to the pandemic, he has worked on filling out his frame to further cement himself as a physical force with offensive upside from the backend.

“Going into my first year, I really didn’t know where it was going to go,” said Furlong. “Playing in my hometown for Halifax is very special.”

Furlong logged a lot of tough minutes in the QMJHL this year, playing against top competition such as former first-round picks, including the like of the dangerous duo of Xavier Bourgault and Maverick Bourque on a consistent basis.

“I got put in a lot of situations to play against top competition every night,” said Furlong. “Playing in those situations every day is tough, but it’s helped me become a better player overall.”

The only player from Halifax to go undrafted ranked on NHL Central Scouting’s final ranking was Markus Vidieck, a strong two-way centre who will almost certainly make a significant impact on the Mooseheads moving forward to the 2022-23 season.

With Dumais and Furlong being added to the list of Mooseheads players affiliated with NHL teams, they join Zachary L’Heureux (Nashville), Cameron Whynot (Calgary) and Robert Orr (Carolina) as the only drafted players on the squad.

Halifax will head into the 2022-23 season with 19 players returning to the roster next season, including top prospects L’Heureux and Dumais.