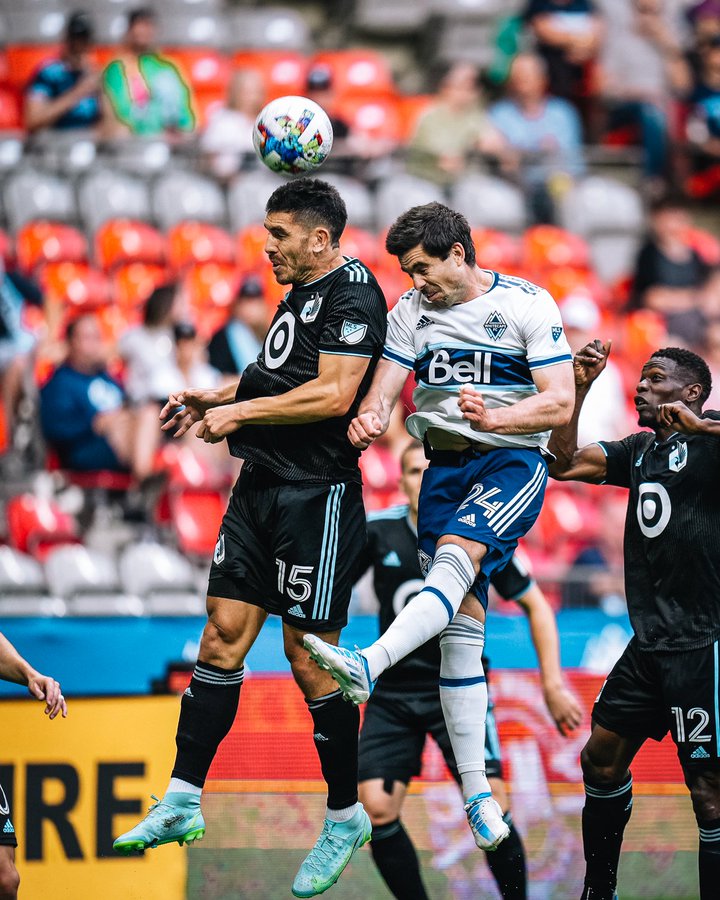 The Vancouver Whitecaps were back in action on a rare Friday night 7:30 start. Their opponent was Minnesota United.

Both clubs had the same record going into the match: 7-3-8. However, Minnesota had the higher goal differential. But the Whitecaps have been the hottest team in MLS over the last ten games with a 6-2-2 record which is good enough for 20 points.

Can they keep the good times rolling? Let’s find out.

Head coach Vanni Sartini went back to the 3-4-2-1 formation.

The most notable thing in the lineup was that Pedro Vite made his first start in what feels like forever. He did really well in 23 minutes in the last game against LAFC and his speed and creativity could help the Whitecaps get going early.

It was good to see Marcus Godinho and Javain Brown start together again. Godinho’s passing and ability to get the ball up the pitch and Brown’s blocks and defensive play have been a good combination for the Whitecaps and Sartini definitely wants that to continue.

Brian White was up front as Lucas Cavallini was likely getting a rest for the midweek game. It would be nice for White to score in MLS more consistently. He was the club’s leading scorer last year and this was a good opportunity to get him scoring again.

Jake Nerwinski was in for Tristan Blackmon and Cristian Dájome was in for Ryan Raposo. Nathan Durec and I aren’t fans of Dájome as a wing-back but it looks like Sartini wanted to rest Raposo as he was getting lots of starts lately. Dájome will be relied upon for some defensive help along with creating offence but with Andrés Cubas in the midfield, there is a chance he doesn’t have to worry about the defensive side too much.

Nerwinski was making his first MLS start since June 14 against the 4-0 loss to Seattle Sounders so it’s been a while for him. But part of it was because he was dealing with an eye injury. I think Blackmon is more a reliable defender than Nerwinski but let’s see if he steps up.

Overall, a decent lineup for the Whitecaps and it looks like they want to get on the scoresheet early.

Minnesota United was charging towards the 18-yard-box early but Javain Brown was there to make two big blocks. He continues to improve.

Dájome and Vite’s passing was very good early. Vite especially was good at finding teammates on the run with his passes.

Russell Teibert gave away a Minnesota counter-attack but fortunately, it resulted in a Brown clearance. Teibert was putting a ton of effort into running back but Minnesota looked too quick for him.

The Whitecaps got their first shot on net around the 14th minute from Dájome as he was running for it but Dayne St. Clair stopped it. It was a very nice long ball from Godinho that led to the chance. Godinho’s long balls have been key to the Whitecaps’ recent success so far.

It was also evident that the Whitecaps attack was forcing errors. That was because they were closing down Minnesota’s defence in the visiting team’s end and at their 18-yard box.

Gauld made a perfect long pass to Dájome who tried to find what looked like White but Minnesota forced a corner. That was the cue for the “Gauld wears a magic hat” chant from the Southsiders. Dájome was everywhere early on but his crosses had to be better.

The Whitecaps continued to move the ball well and got to test St. Clair one more time but they couldn’t get good shots off. As for the defending, Minnesota did look threatening but Vancouver was doing a good job of taking the ball away in the 18-yard-box by closing it down. Brown and Ranko Veselinovic were leading the shutdown.

Cropper was tested for the first time late in the half from a shot outside the box through a bit of traffic.

Overall, it was a fairly even half, especially considering shots were 4-4 for both teams. Shots were 1-1 on target but Minnesota just slightly had more possession. With two teams with the same record playing, that was no surprise.

Godinho lost the ball carelessly in the midfield but Brown bailed him out. Before that Gauld took a shot from outside the box but it went wide. While Gauld is a great passer, he needs to shoot more but of course, more accurately.

Ryan Raposo came off for Godinho who was dealing with left knee discomfort in the 53rd minute. He got involved early with a shot from a Dájome cross but that went wide. Good to see him contribute early on.

Cubas was dealing with a groin injury and came off for Leonard Owusu at halftime and the Whitecaps looked less defensively stable without him. Minnesota was coming in with numbers and Emmanuel Reynoso got a shot on Cropper but it went off his fingers and the bar. That was a close one for the Whitecaps.

In the 63rd minute, the Whitecaps took off White for Lucas Cavallini. They needed a spark.

They almost got the spark as Vite’s cross found Gauld but he was foiled by the post. So that’s two posts on both ends. It was anyone’s game.

The Whitecaps did find their spark and it was from Cavallini. Vite made an excellent cross from the right side and Cavallini got a head on it and it went past St. Clair. That was Cavallini’s sixth goal of the season which leads the Whitecaps and it was in the 66th minute. *Gasp* 666! Looks like Cavallini was exorcising his demons of the past two seasons and scoring devil in him awoke.

But in the 71st minute, Minnesota tied the game. Kemar Lawrence got on the end of the cross from DJ Taylor and his volley beat Cropper who was moving the wrong way. The defenders also looked flat-footed.

The Whitecaps continued to get chances but defensively, they looked sloppy. There were turnovers and they were often caught flat-footed. Cubas was sorely missed.

Nerwinski in particular looked shaky. Owusu and Teibert were not getting it done in the midfield. Teibert kept passing it backwards or sideways while Owusu did not look defensively and kept giving the ball away.

Minnesota got the go-ahead in the 84th minute. It was a long shot from outside the box from Luis Amarilla. Cropper probably should have had that one.

It didn’t take long for another goal…for Minnesota United. Franco Fragapane made it 3-1 after a nice long ball from St.Clair but it looked like Amarilla was offside on the play. However, the referee did not check VAR. Maybe VAR was not in service because it was part of Rogers. It turns out that Amarilla was onside on a closer look.

It was a tough defeat. The Whitecaps needed the points to climb the table and push the tables and got none. They just collapsed defensively in the second half. You can make an early case for Cubas for being the team’s MVP. Actually, you might as well give him the award now.

Sartini acknowledge that it was a close game but things fell apart after Cavallini’s goal.

“It was even game…we could have done more offensively….in the second half the game became open…after the goal, instead of getting fueled by the goal we dropped a lot,” he said.

He also emphasized playing for a whole 90 minutes.

“If we are not ourselves for 90 minutes, we cannot get the points,” said Sartini.

“We need to be a 90-minute team…we need to continue to play our game at home and on the road for 90 minutes,” said Cropper.

The goalkeeper also talked about missing Cubas on the field.

“When you don’t have Cubas on the field, you miss his defensive ability,” said Cropper.

Teibert believes the team will keep fighting and in all sports, a loss is a learning experience.

You can’t win every game but you can learn from every game,” said the Whitecaps’ captain. ” We’ll keep fighting.”

Minnesota United scored three goals but their expected goals were 0.9. The Whitecaps xG was 0.7 in case you are wondering.

Well if the Vancouver Canucks can get two Elias Petterssons, why can’t the Whitecaps get two Andres Cubases?

The Whitecaps won’t get much rest as they head to Cincinnati on Wednesday. Kickoff is at 5:00 p.m. Pacific.