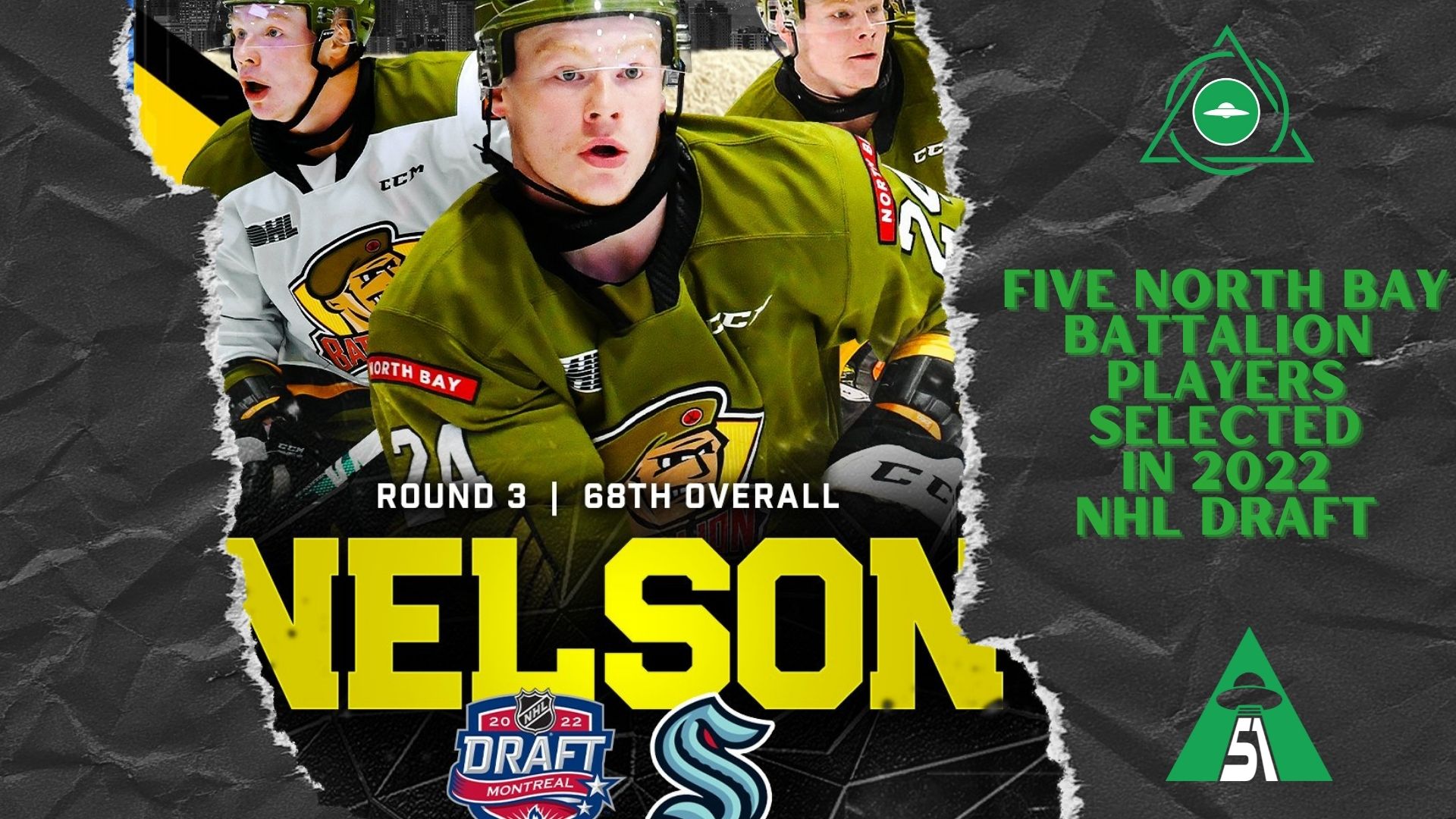 With the 2022 NHL Entry Draft coming to a close, the OHL saw the most draft picks from their respective league with 35. Of those, the North Bay Battalion had five players selected by a team: Ty Nelson, Tnias Mathurin, Kyle Jackson, Dominic DiVincentiis, and Liam Arnsby. All five of these players deserve to be where they’re at and signal a bright season ahead for the Battalion.

Nelson went near the beginning of the third round, at 68th overall to the Seattle Kraken. As the NHL’s newest franchise, Seattle has a clean slate in terms of prospects and how they want to form their team. With Nelson now in the system, they get some solid defensive play and slight offensive potential; the defenceman did put up 51 points in 66 games in the 2021-22 season. I do like this pick from Seattle, as it appears they want to go with a balanced approach from their lineup (see: Shane Wright) and have multiple players excel at different things.

Fun Fact: Tnias, spelled backward, is Saint; coincidence or not, he doesn’t take very many penalties.

Adding much more size to the back end, standing at 6 foot 3 and 201 pounds, Mathurin went in the fifth round (137th overall) to the Detroit Red Wings. Having gone from U16 hockey straight to the OHL after missing the 2020-21 season, the Ajax, Ontario native posted a respectable 15 points in 44 games. Similar to teammate Ty Nelson, EliteProspects says that Mathurin has an offensive upside, but is still able to shut things down in his own zone.

Jackson, an overager from Ottawa (turning 20 in October of this year) finds himself joining the aforementioned Nelson in Seattle being picked 196th overall. The first of three seventh-round picks, Jackson put up 30 goals and 62 points in just 45 games. It’s a little early to tell whether or not he spends his first pro season in Coachella Valley (AHL) but after missing a year of development, just as many other prospects have, Jackson may have something to prove.

Fun Fact: Dominic and I share a birthday (March 4)

The lone goalie selection from North Bay, DiVincentiis finds himself trying to reach the summit that is Connor Hellebuyck with Winnipeg Jets. Off the board at 207th overall, the Bolton, Ontario native had a solid showing with a .907 save percentage and a 2.59 goals against average. While his teammates were doing a lot of scoring, DiVincentiis did what his team needed of him and could be a surprise player one day.

With the final Battalion pick of the draft, Arnsby goes 214th overall to the Florida Panthers. Considering where he was ranked by most, he could be a bit of a surprise player as well. Captaining the North Bay squad to a third-round playoff performance as an 18-year-old is a feat in itself, and there’s still room to grow. EliteProspects poses him as a player with a good shot but needs to get quicker in order to reach the next level. Will he? Not far removed from the draft, only time will tell.

Spokane Chiefs’ Beaupit and Sward Selected at the 2022 NHL Draft

2022 Draft A Historic One For The Winnipeg ICE