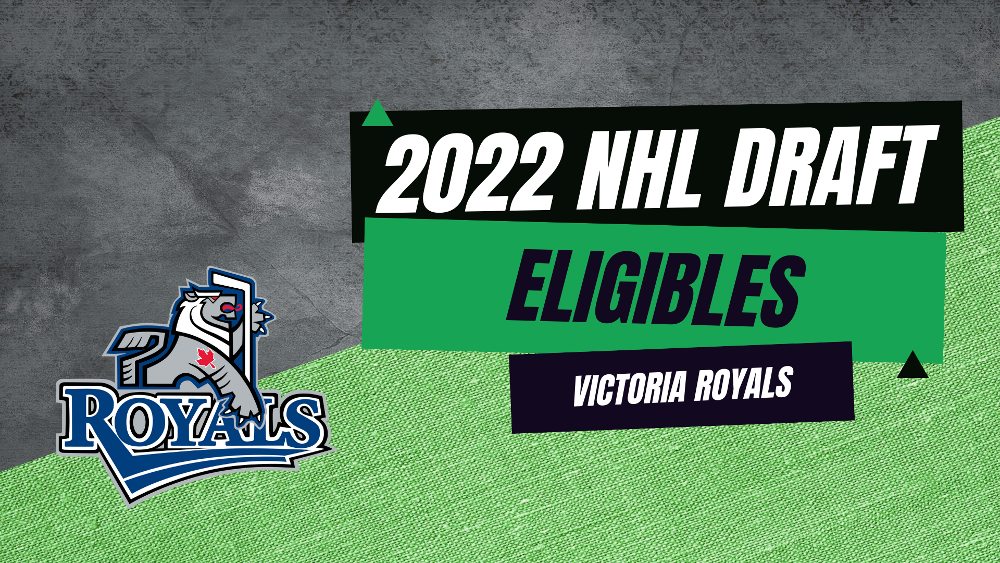 The Victoria Royals had one of the most chaotic seasons to watch in 2021-22, but they had one of the youngest teams in the WHL. Most of their roster is eligible for the 2022 NHL Draft and we’re going to take a quick look at seven of them.

In his second draft-eligible season and his first in the WHL, Almquist is a smaller forward who is known for his skill. He’s fun to watch, though he missed a decent amount of the season. With 14 points in 42 games, he’s a great example of why not to focus on the numbers when it comes to a player’s development. Standing at 5-foot-7 Almquist has a bit of an uphill battle in the minds of scouts, but if a team were to select the Danish forward in a late round, they would be happy with what he could become for them.

Fast and smart, Tanner Scott is one of those guys you love to watch play, but hate when it’s against your team. While he’s a smaller player at 5-foot-9, 156-pounds, he’s good on the forecheck and has been a quality penalty killer for the Royals. Something fun is that in 64 games with the Royals this season, Scott took just five penalties.

FCHockey scout Donesh Mazloum has compared the Victoria forward to a mosquito due to his speed and ability to be a pest to opposing players but lack of size and strength. While talk around Scott has been a bit light, teams may have found enough interest in him to pick him up in a later round.

Coming in at 76th on NHL Central Scouting’s final rankings, Schuurman has a great chance to go in this draft. One of the few Royals players to appear in all 68 games of the season, Schuurman picked up 54 points in his first full season in the WHL. He has a lot of upside to his game (including an incredible ability to score goals), but also a fair amount of risk as he needs to find some consistency. Though, with a Victoria Royals team that had major swings in how they were playing throughout the season, that may not be a complete reflection on Brayden Schuurman‘s game.

With a little more confidence in the Royals room and a team that has some more consistency all around in the coming season, teams may want to add Schuurman while they can and a mid-round isn’t a wild spot for him to go.

Born in 2003, Wilson’s birthday is in October, so this is the defenseman’s first draft-eligible year. The 6-foot-3, 206-pound defenseman has spent the season partnered with San Jose Sharks prospect Gannon Laroque and the pair have looked good together.

Wilson has the size to be a desired blueliner in the NHL and he is poised to be more of a standout in the coming season. He’s possesses an ability to keep opposing players to the outside and make things difficult for them to get things going. A good penalty killer who can eat minutes on a roster, Wilson could go in a later round and nobody should be surprised at it.

When you watch Luke Shipley play, one of the things you think is “Man, this kid is smart.” He plays with a calm demeanor and manages to find the exact space he needs to fill, seemingly with ease. Watching him just kind of makes you feel comfortable and he’s one of those players you can trust is going to do something you like in every game.

No, his games aren’t perfect, but he’s still had less than 100 games in the WHL. He has time and as a mid-late round pick for an NHL team, someone could be walking away with a steal in Shipley.

Campbell Arnold is age eligible for this draft by two days and while he’s probably one who is hoping for an invite to a camp this summer, it could happen. Spending most of his WHL career with the Spokane Chiefs before being traded to the Royals at the beginning of the 2021-22 season, Arnold hasn’t been able to find consistent success in the WHL, but he also hasn’t had consistent opportunity. He’s typically been used as a backup netminder, but if an NHL team gets their hands on him, they could be pleasantly surprised with what he becomes.

If you’re looking for a reason the Victoria Royals made it through some of their toughest stretches still looking alright, Tyler Palmer is what your conclusion should be. Facing a barrage of shots night after night, Palmer looked outstanding, even in 5-0 games against the Royals, Palmer still was a bright spot. He is a fast, athletic goaltender. He’s calm and tracks pucks very well. Basically, he’s everything you want in a goaltender.

But he’s under 6 feet tall! Yeah, that’s not an excuse not to draft him.

Wyatt Wilson took a while to grow on me, but man, I love watching him play now, and almost hope San Jose gets him just so I can see both him and Gannon Laroque out here in the Bay. I don’t NEED it, but wouldn’t that be fun?

Luke Shipley might be one of the most underrated draft-eligibles this season. For how good he is, it felt like few people were actually paying attention to him throughout the season, myself included.

However, if I think Luke Shipley is one of the most underrated guys available in this draft, I think Tyler Palmer might be completely disrespected. Scouts for NHL teams better have been watching him and wanting him or there will be a number of people in my direct circle who will have plenty of words.

I said NHL teams might be surprised with what Campbell Arnold could become if they take a chance on him. I would not be surprised and this is going to be one of those goalie takes that people get upset with me about but I believe in who I believe in.