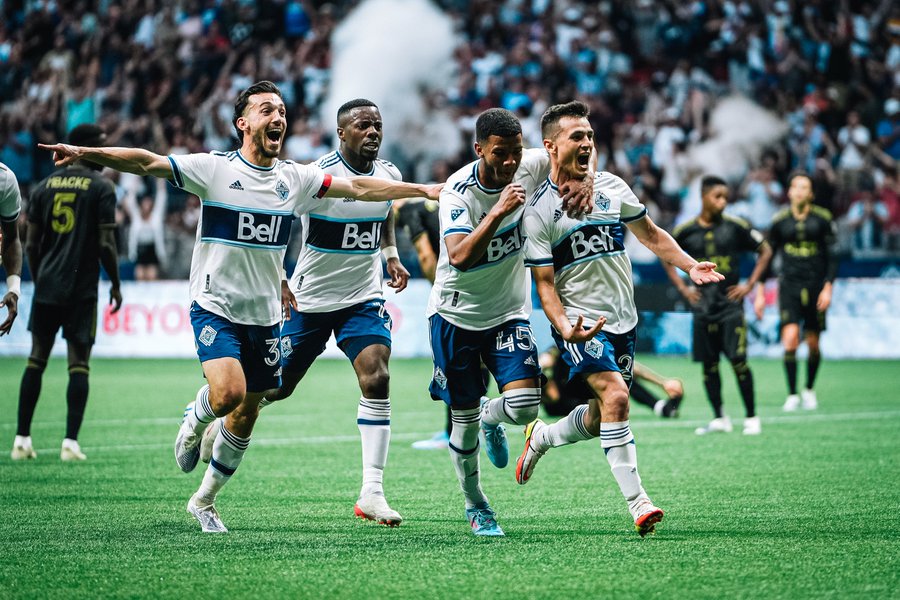 It is both a safe bet and a surprising admission to say the Vancouver Whitecaps are experiencing some of their best football right now. In the past 10 games, they have posted a record of 6W-2D-2L, good enough for 20 points in that time.

It’s the best run of form currently in the MLS.

Head coach Vanni Sartini said several things have started to go right, which has contributed to the product on the pitch.

“We changed a little bit the approach we have on the game,” Sartini said. “So tactically, we decided to keep the same formation and keep the same principle, but to apply those principles starting 20 metres lower…when we don’t have the ball.”

The coach has previously extolled the importance of building from the back. In applying these principles lower, they have been able to shore up their defensive play.

In the last three MLS matches, they have recorded all clean sheets. Los Angeles FC had no shots on target in the entire game last weekend. New England had two, and FC Dallas had one. The Whitecaps have outshot their opponents (on target) in these matches 10-3.

Having such defensive stability has also meant that any shots on target their opponents do have are from less-than-ideal spaces of the pitch.

The final thing that has helped the ‘Caps improve over the previous few months has been how rapid the change occurred. This run began with two wins and a draw, breathing confidence into a squad that was sitting in the basement of the MLS at the time.

“[It] fuelled the confidence of the players, and now the players are 100 per cent locked in what we’re doing,” Sartini said. “And of course, when you have everyone really, really, really believing in it, even in tough situations…I think it’s the belief now is really at a top level and we need to keep working to maintain it.”

That confidence has been paramount. This run of form has seen its share of adversity. Ten players were either injured or on health and safety protocol when the Whitecaps won against Sporting Kansas City as well as Cavalry FC in the Canadian Championship. The loss against Charlotte FC saw them play with only 14 players available, and they still challenged the expansion club in their own stadium.

Throughout it all, Sartini has upheld his demand for intensity, something that can be difficult to maintain over such a long run of form.

Getting the most out of Pedro Vite

Pedro Vite came on as a substitute in the match against LAFC, and the result of that change was immediately apparent.

In 23 minutes, the Ecuadorian registered a couple of killer passes and three shot-creating actions. He also had the highest number of progressive passes of any player on the pitch, which is impressive for how few minutes he had.

Suffice it to say, he was brought on to affect the attacking prowess of the Whitecaps, and he delivered.

Sartini said Vite is getting his chance now because his training has improved.

“What he did in the last couple of weeks is [he] started to put that intensity in training. That translated to a good performance that he had in the last 20 minutes.”

It’s good to see the midfielder start to find his way. He will be an important piece in the coming months, especially with Déiber Caicedo out injured, likely for a significant period of time.

Like looking in a mirror: Minnesota comes to BC Place

Minnesota United FC is on the same points as the Whitecaps. They also have the exact same 7W-3D-8L overall record.

They come to BC Place this Friday as the Blue-and-White end their four-match homestand and look to enter into that final playoff spot in the Western conference.

Sartini said he admired the team.

“They’re in a good moment. They won their last two games,” he said. “They’re really good in transition. They play with a 4-2-3-1 with [Emanuel] Reynoso as a 10. As soon as they win the ball, they send Reynoso and then the wingers to attack the space. And they’re going to be really hard. That’s the reason why we need to keep the structure when we have the ball in order to avoid the transition.”

Reynoso has been lighting it up for Minnesota this year. He leads his team with seven goals and four assists.

“I think that in terms of no. 10 quality, like a guy that can invent something, I think Reynoso is the best player in the league. It’s the guy that really transforms a team that’s an average team to a very good team.”

However, admiration for the club or the player does not mean the Whitecaps do not have a plan. The last time these two clubs met up in October of last year, the ‘Caps came away with a 2-1 win.

Sartini said Reynoso has the ability to make a good team a stellar team. But knowing how to shut down their quality playmaker and goalscorer, in addition to everything the Whitecaps are doing right now, gives them an edge in this matchup.

Name me a sports club that does not have any injuries. They are few and far between. The Whitecaps have certainly had their share this season, but thankfully, the number of players out right now is not as bad as it was just over a month ago.

Cristián Gutiérrez is still out with a left calf injury. He’s recovering, but there is no timeline for when the player will be back.

Sebastian Berhalter and Caicedo are the two other longer-term injuries.

In addition, Thomas Hasal suffered a setback in his recovery during a match with Whitecaps 2.

“Thomas unfortunately, in the game, he had a little knock again on the end, nothing major. But his finger got swollen a little. So, he won’t be available to be for selection this week.”

The other player on the list is Michael Baldisimo, but his situation does seem to be better.

“Michael is recovering,” Sartini said. “He’s going to be kind of doubtful, I would say. But he’s back on in being available for the team. He’s in the period where it’s one exercise, and then he stops and those kinds of things.”