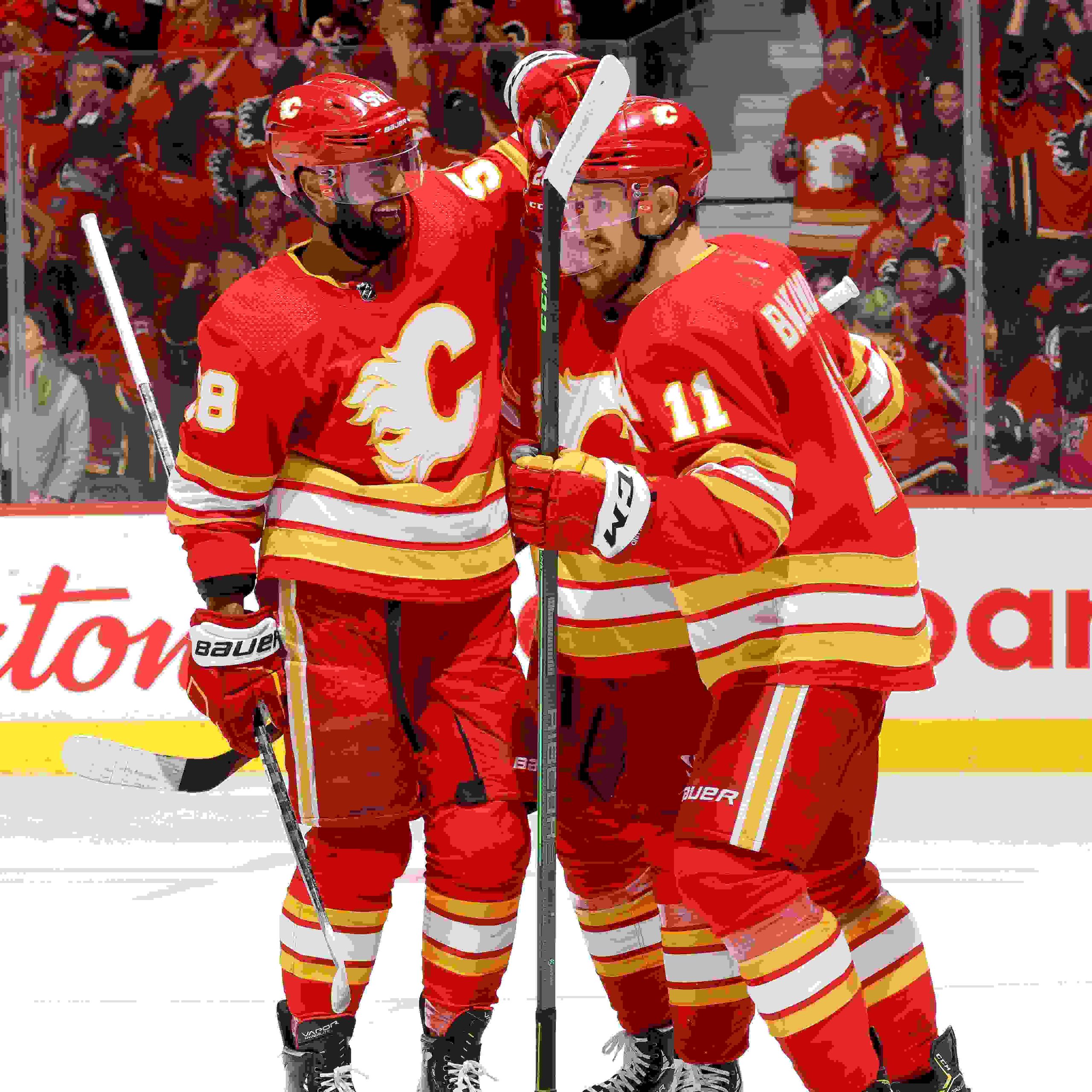 Of all the teams going into the offseason, the Calgary Flames have some of the biggest questions to answer.

The Calgary Flames had a strong, and maybe somewhat surprising, first-place finish in the Pacific Division. They then fell to the Edmonton Oilers in five games in the second round of the playoffs.

GM Brad Treliving made some significant moves during the trade deadline season. They acquired Tyler Toffoli and Calle Jarnkrok. Oh, and they acquired Ryan Carpenter but he didn’t play much. I don’t know if you would say it was a good result or a disappointing result. There’s the easy answer that Connor McDavid was playing at an unbelievable level. He and Draisaitl were unstoppable. But looking deeper, poor goaltending and poor defensive play all around cost the Flames the series versus the Oilers.

The next steps for the Flames are quite frankly, unknown. The biggest reason is they have the biggest prize in free agency, Johnny Gaudreau.

Both the Flames and the Gaudreau camp agreed to keep things quiet. On more than one occasion, Flames General Manager Brad Treliving has said they will move heaven and earth to sign him. Head Coach Darryl Sutter called Gaudreau the best checker on the team.  During the end of season press conference, Blake Coleman was asked about campaigning other free agents to stay. His answer was “you do if they are Johnny Gaudreau”. The desire is clear from the Flames they want him to stay.

On Friday’s Jeff Marek show, Sportsnet insider Elliotte Friedman had this to say about where we are at with the Gaudreau contract.

I’m having trouble believing that Gaudreau will take less than 10 million to stay. He was second in the league in points with 115. He was in the Hart Trophy conversation. He can easily get 10 million dollars in the open market but this is a contract that will take more than that. The question we discussed on the Shifts and Pucks Podcast is the walkaway point.

This is a more complex question. Matthew Tkachuk had by far his most productive offensive with his first 100-point season, 104. While he had 10 points in 12 games in the playoffs, he only scored four goals. Tkachuk scored one goal in game 7 against the Dallas Stars and hat trick in game 1 against Edmonton At the very least, it would be fair to call his performance inconsistent.

Treliving called Tkachuk a “cornerstone” player. But the question is what do you pay him? His qualifying offer is $8 million. But do you sign him long-term, walk him to free agency, or do you trade him?

In part, this depends on Gaudreau signing or not. In part, it depends on Tkachuk But there are two other things to be concerned about here that aren’t being talked about.

First, the injury concern with Chris Tanev. Tanev is expected to miss at least the start of the season with his several injuries. We know Tanev has healing superpowers. But it’s very clear from the playoffs, they will miss him. How they fill that huge hole going forward is a question.

Next, is Elias Lindholm. Lindholm finished second in Selke voting and you know he’s going to be in the running again. He’s currently a bargain at $4.850 million. His contract is up in 2024 and he will get a big raise. While the cap goes up, can you afford Gaudreau, Tkachuk, and Lindholm and still have a competitive team?

The belief has been if Gaudreau stays, then Tkachuk does. But there is an argument that you could get a very decent haul for Tkachuk. But the issues of signings on the Flames don’t end here and the next one is a little bit more complicated.

Andrew Mangiapane enters his RFA coming off a career-best 35-goal season. His agent Ritch Winter has suggested that Mangiapane will test free agency. Mangiapane, who’s 26, signed a two-year, 2.4 million contract. He signed that deal when the Flames signed Jacob Markstrom and Tanev back in 2020.

The Flames could afford him right now. According to CapFriendly, they have $26,925,000 projected cap space. But let’s assume for a quick moment that $20 million is with Gaudreau and Tkachuk. This makes it a really tough spot for what you give Mangiapane. So let’s say for a moment, he does not accept his qualifying offer.  Could this be one that gets an offer sheet? Yes, they are rare but there could be interest, which could lead to a possible trade. It’s hard to not be interested in a 35 goal scorer.

Finally, there is Oliver Kylington. Kylington worked his way to get on the Flames lineup. He was on a great pairing with Tanev. Easily, the most improved Flame. The question is it because of his partner, Tanev, or was it his own play? The answer is probably both. Tanev is well known for being a great defensive partner.

However, this doesn’t mean Kylington wasn’t. According to Evolving-Hockey.com, when Kylington was on the ice, the Flames controlled $55.8% of the expected goals at even strength. They also controlled $55.4% of the shot attempts. His skating, his presence, his overall game took a huge step up last year.

Kylington took a team-friendly, league-minimum $750 K last season. He will get a raise. The question is how much? Of course, there is a factor in Tanev’s injury. But the Flames will likely lose Nikita Zadorov to free agency. Erik Gudbrandson was a pleasant surprise for the Flames last season. Can he duplicate it? Then there is Jussu Valamaki and Conner Mackey. Are one or both ready for the next step?  That makes the contract negotiations interesting.

It’s somewhat cliche to say this is the most important offseason in a team’s history. However, in this case, this offseason will impact the Flames future for years to come.