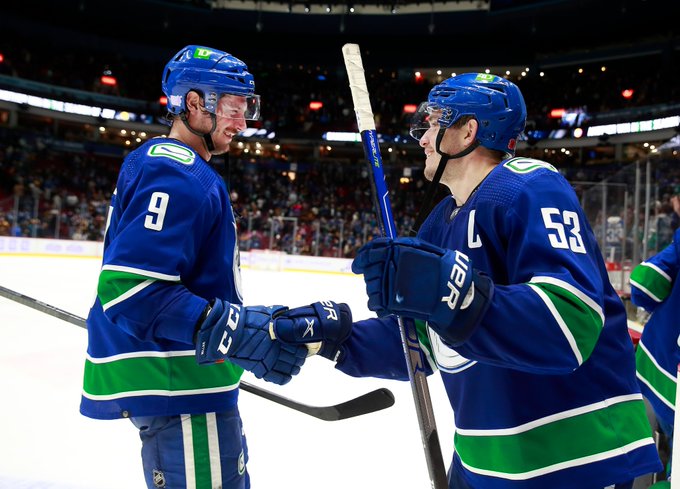 It’s been a while since the last Avid Thoughts. I’ve been busy with things.

We also have a new website and it uses WordPress! No more formatting to fix and there is SEO! It also helped in writing Vancouver Whitecaps post games.

Big week for the Canucks coming up

First up on Avid Thoughts, the Vancouver Canucks.

The NHL Draft takes place in Montreal on July 7 and 8. The Canucks have pick number 15. I haven’t kept up with the draft this year so I just read the scouting reports from the experts and watch Youtube clips. At 15, the guys I like are defenceman Denton Mateychuk, centre Marco Kaspar and left-winger Isaac Howard. However, when the Canucks are on the clock, they need to take the best player available.

The draft is also a time when teams can make trades. We’ve seen teams make blockbusters on draft day. The Canucks could do the same.

JT Miller is the name that has been brought up numerous times on the trade rumour front. As I have already written for The Canuck Way, it feels even more inevitable that Miller will be traded since Brock Boeser re-signed to a three-year deal.

I just have the feeling that in the next 48 to 72 hours, the Miller trade will go down. A potential Miller trade is the talk of the town right now. Not a day goes by when I don’t see Miller trending on Twitter.

Kevin Weekes of NHL Network and ESPN Tweeted that we should keep an eye out on Miller. Maybe Weekes will announce the Miller trade by filming himself in the bathroom or something.

Frank Seravalli of Daily Faceoff mentioned that we should keep an eye out on the New Jersey Devils and suggested the second overall pick and Jesper Bratt could be in play. Of course, Devils fans took this with fury and the replies are hilarious.

I said there was no chance the Devils would trade the second overall pick for Miller but by the look of things, there is a very good chance I could be featured on Freezing Cold Takes by the end of this week.

The second overall pick would be nice. If the Canucks get it, who would they select? Juraj Slafjovsky? Logan Cooley? Simon Nemec? Someone else?

But they have to get more than just the second overall pick. Jesper Bratt is someone I like. He led the Devils in points with 73 last season and was tied with Jack Hughes for the team lead in goals with 26. At just 23, it looks like Bratt is on the right track to becoming a solid NHLer with his speed and great hockey sense.

Bratt led the Devils in Corsi For at 53.89% and expected goals percentage with 56.86% according to NaturalStatTrick. If the Devils are willing to send him to Vancouver for Miller as part of a package, I would do it.

Players like Ty Smith, Damon Severson, and Alexander Holtz are also names the Canucks could potentially target from the Devils.

Whether it is New Jersey or somewhere else, it looks very likely Miller is gone. Expect a haul but don’t expect too much. I’ve seen people make Miller for Alexis Lafrenière proposals. That would be nice but that is not happening.

Buckle up folks, we could see a flurry of moves from the Canucks this week. Other than Miller, we could see more trades. Who else could be going out? Maybe Tyler Myers or Tanner Pearson or Conor Garland or someone we least expect. Let’s go.

Whitecaps beat the best team in the league

The Whitecaps beat LAFC 1-0 at BC Place on Saturday night thanks to Andrés Cubas’ first MLS goal.

Vancouver played well. They did not give up a single shot on target. Considering the fact that LAFC are the MLS leaders in points, that is a phenomenal achievement.

After a meh first half where not too much was happening, the second half is where things opened up for the Whitecaps. They were really moving the ball well, making solid blocks and transitioning up the pitch quickly.

It helped that Pedro Vite came on for some game time for the first time in a while. Whitecaps head coach Vanni Sartini has talked about Vite lacking intensity despite having a lot of talent. Well, he showed off that talent on Saturday displaying his speed and creativity. As a result, the Whitecaps turned the pace and intensity to 100.

Cubas was everywhere. He scored, he was blocking clearances, making interceptions and making tackles on pretty much every LAFC player. I could watch him battle for the ball all day. He is like a dog with a bone. He wants it but if you take it away, he’ll do anything to get it back.

The Whitecaps have been in good form since May. There are still things to work on but they’ve been good. They are slowly climbing up the very competitive Western Conference and have the Canadian Championship Final against Toronto FC on July 26. They have the chance to win a trophy.

I also have to talk about the crowd at BC Place on Saturday night. The attendance was 18,292 and on the broadcast, you could see the empty seats. But the broadcast probably didn’t do justice to how loud it was, especially after Cubas scored.

The atmosphere was incredible. It was probably the loudest Whitecaps crowd all season. After all, the Whitecaps do have the best sporting atmosphere in Vancouver. No sport has an atmosphere like soccer.

The Southsiders and numerous supporters groups led the boos for former Whitecaps goalkeeper Maxime Crépeau. The rest of the stadium caught on and the boos were louder each time Crépeau touched the ball. The stadium rang with “It’s all your fault” chants after Cubas beat Crépeau in the 89th minute. Again, another late Whitecaps winner.

18,000 is a good number for a Whitecaps game. I would like to see them average 20,000 fans a game. Many teams in MLS have that number for average attendance. Winning would help that cause.

The Whitecaps have a bunch of home games this summer including the Canadian Championship Final. They are 5-3-1 at home this year, The team has talked plenty about the importance of winning at BC Place and making it a fortress. They have also credited the fans for their home success.

I hope the form continues and more fans show up to games. Home field advantage is important in soccer and hopefully, we get that type of atmosphere on Saturday night for future home games, especially on July 26.

Teams are signing players and Chelsea still hasn’t. Even Manchester United have made signings as they have signed Christian Eriksen and Tyrod Malacia.

They did sign an 18-year-old goalkeeper Eddie Beach from Southampton but he is for the academy. Other than that, nothing.

New owner and chairman Todd Boehly has promised Thomas Tuchel six signings this summer. Tuchel also wants two signings before the team heads to the US for the preseason tour.

Chelsea seems to be close to signing Raheem Sterling of Manchester City and he could be announced in the coming days. They also looked close to signing Brazilian winger Raphinha from Leeds United after hijacking the Arsenal deal. However, it looks like Chelsea has been hijacked by Barcelona. Aren’t they broke? Are they coming up with spells where they get free money? If so, I want to learn those spells!

Raphinha’s first choice is apparently Barcelona so Chelsea better back out. But they still want to get a deal done. However, they need committed players who want to play for them. They need to learn from the drama caused by a certain striker who is now out on loan.

Chelsea is heavily linked with Juventus defender Matthijs De Ligt. I like De Ligt. He’s just 22 years old but he plays like a veteran already. The Dutchman has great strength, tackling ability, speed, straighten and can win aerial duels.

However, De Ligt is going to cost a lot of money. Tuchel really wants him and he is reportedly very interested in joining Chelsea. Juventus are asking for at least 70 million Euros for him. Both Chelsea and Juventus have been negotiating for the last few days.

But Bayern Munich wants him too. But Italian journalist Romeo Agresti says Chelsea are the front runners. I hope Chelsea doesn’t bottle this. With over 200 million to spend, I hope Boehly is willing to pay for the defender Tuchel really wants and if the transfer fails, things could get ugly.

An article by Alfredo Pedullà says that De Ligt will go to the team that bids the highest.  Hopefully, it’s Chelsea.

Chelsea has been linked to some superstars over the past few weeks.

The first is Neymar Jr. The winger reportedly is going to be sold by Paris Saint Germain and Chelsea seems to be the front runners.

Sure, Neymar is 30 but he is still a generational talent and one of the world’s best and probably still has a few good years left in him. However, his wages are going to be huge and there is his attitude and ego. Those could ruin the locker room. I am also not sure how Neymar can handle the physicality of the Premier League.

I would like Neymar but it seems like a pipe dream. A superstar would be huge for Chelsea. They also need wingers to improve the attack and Neymar is perfect for it. He arguably played his best football under Tuchel when he was at PSG. However, Tuchel has said that Neymar can be tough to manage.

As if things cannot get even more bonkers, Chelsea has been linked to Cristiano Ronaldo. Siu! Ronaldo has apparently asked to leave Manchester United but only if they find a reasonable fee. I can’t blame him because Man U are a mess and I don’t think Ronaldo wants to play in the Europa League next season.

In my heart, I would love this for Chelsea. However, my head doesn’t see a fit. Tuchel wants a striker who can press and Ronaldo doesn’t really do that.

Yes, Ronaldo can score and Chelsea needs someone who can. Who better than the greatest men’s soccer goalscorer of all time?

But Chelsea needs to think long-term here. If they do sign Ronaldo, it would be for only one year. He would take minutes from Armando Broja who is a promising striker. Sure, Ronaldo can still play but he is 37. The end is near for him, unfortunately.

I’m not against Ronaldo signing for Chelsea but I don’t see the fit tactically and in Tuchel’s long-term plans. It feels like they would sign Ronaldo just for the publicity and the revenue. I just hope they sign someone soon and hopefully, that triggers the domino effect for more players coming in.

Check back next week for Avid Thoughts! Hope you enjoyed this one!