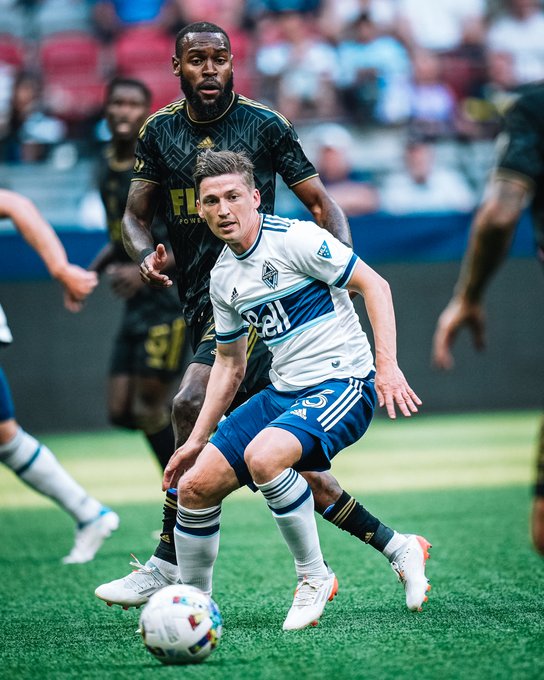 The Vancouver Whitecaps were ready to see a few familiar faces when they faced off against LAFC. Maxime Crépeau has continued his fine form for his new team, and former head coach Marc Dos Santos has found life on the bench as an assistant for the California-based team.

But both players would step back into BC Place to face a Western conference rival. There were bragging rights on the line in addition to the points.

Well, leave it to Vanni Sartini to still find a way to spring a surprise. Call it a striker-less formation or possibly a three-striker formation. Either way, it is something that has not been tried yet this year.

Ryan Gauld was placed between Lucas Cavallini and Brian White up top, but expect him to drop back into a no. 10 role and let the two others have more space.

Both Ryan Raposo and Marcus Godinho kept their spot along the flanks. Godinho had a positive match against New England and would be looking to do the same. Raposo struggled and would need to find his game.

The only other significant change was Russell Teibert in the midfield for Leonard Owusu. Teibert has full recovered from the eye injury he suffered in the Canadian Championship match against Cavalry FC at the end of May.

Both teams came in with a game plan to press. The front two of Cristian Arango and Danny Musovski for LAFC were busy in closing down any possession of the Whitecaps’ back line. It led to a few forced errors.

Most notably, Tristan Blackmon gave away the ball in 11′ just on top of his 18-yard box. LAFC picked up the ball quickly, and it was only a block from Javain Brown that stopped a quality chance. LAFC snapped up the rebound and managed to ring it off the crossbar behind Cody Cropper, but it stayed out of the net.

At the other end, Cavallini and White were both trying to find space. However, they were finding it difficult to translate their attacking movement into quality opportunities.

Neither side has a shot on target in the half. Both Cropper and Crépeau spent the majority of their time distributing the ball and barking orders to their back lines as they were able to hold the ball before it got to the goal.

In addition, to his earlier block, Brown had a good first half. He was winning the majority of his challenges and transitioning the ball up to the attacking players.

Raposo seemed to be finding his game after a difficult time last match against New England Revolution. His movement was better as well as his passing.

While not a slow back by any measure, both sides were frustrated by the other’s defending. The ‘Caps posted a dismal xG of 0.1, while LAFC was marginally higher at 0.2.

Both sides would be hoping for more attacking prowess in the second half.

The Whitecaps tries to get things started with a corner in the 50′. But the difficult in the final pass continued to frustrated them, as Crépeau intercepted to low cross from White.

LAFC were having trouble of their own. They looked good in control as they moved the ball up the pitch, but the Whitecaps’ backline was able to continually close them down and win back possession. Any chances LAFC had were from outside the box and high over the net.

It was not until the 64′ that either side had a shot on target. Crépeau attempted to grab the ball off a Whitecaps corner, but ended up spilling it. White got on the end, turned and crossed it back into the middle of the 18-yard box for Blackmon. The centre-back got his head on it, putting it across the net, but Crépeau recovered to make the diving save.

Teibert had a quality chance at the edge of the 18-yard box. Pedro Vite, who had come on a few minutes earlier for Raposo, cut it back. However, the midfielder’s shot was closer the the open roof than the net.

But the chances kept coming for the Whitecaps. In the 75′, White found space on the right and beat the LAFC keeper, but not the woodwork.

White kept pressing hard. In the 85′, he cut in from the right and beat Crépeau on the near post, but not the post itself.

It seemed a though a 0-0 draw was going to be the story, a solid point against the league’s top club. But the Whitecaps, as they have several times this season, never gave up.

In the 89′, Vite found the ball in the 18-yard box and attempted to cut it back. It deflected off a defender, but right onto the feet of Cubas. The midfielder made no mistake, powering himself through the shot for his first goal in MLS and for the ‘Caps.

The Blue-and-White were able to hold onto the ball for the remaining stoppage time to secure the three points, a huge win for the Western Conference standings and a statement to the rest of the league.

Sartini had much to say about the statement win. He applauded the commitment of his players and spoke about what this match meant to the club, the fans and the city.

“It [the win] gives us a lot of confidence…I hope we play against them in the playoffs,” he said.

“Since May 8 we were very good, but before that…I think the coach was drunk,” Sartini said, referring to himself and the record the Whitecaps had at the beginning of the season.

Cubas, who was the matchday hero with his game-winning (and only) goal, said he was happy with his contribution.

“Very happy honestly, super happy for my first goal,” he said. “But even more happy for the victory. We’ve worked hard for this.”

Cubas said he has enjoyed his time in Vancouver and MLS so far. He was quick to acknowledge everyone in the club for making him feel comfortable and welcome.

“I am adapting every game, and I get to know the league better and the teams better,” he said. “Overall, [I] just keep working during training to adapt to this league.”

The Whitecaps held LAFC, the most potent attack in MLS, to zero shot on goal.

Throughout the night, ‘Caps fans were throwing digs at Crépeau. This about sums it up.

The Whitecaps finish off their run of home matches against Minnesota on Friday, July 8. Kickoff is at 7:30 p.m.