Graham Sward: Good, Both On Ice and Off 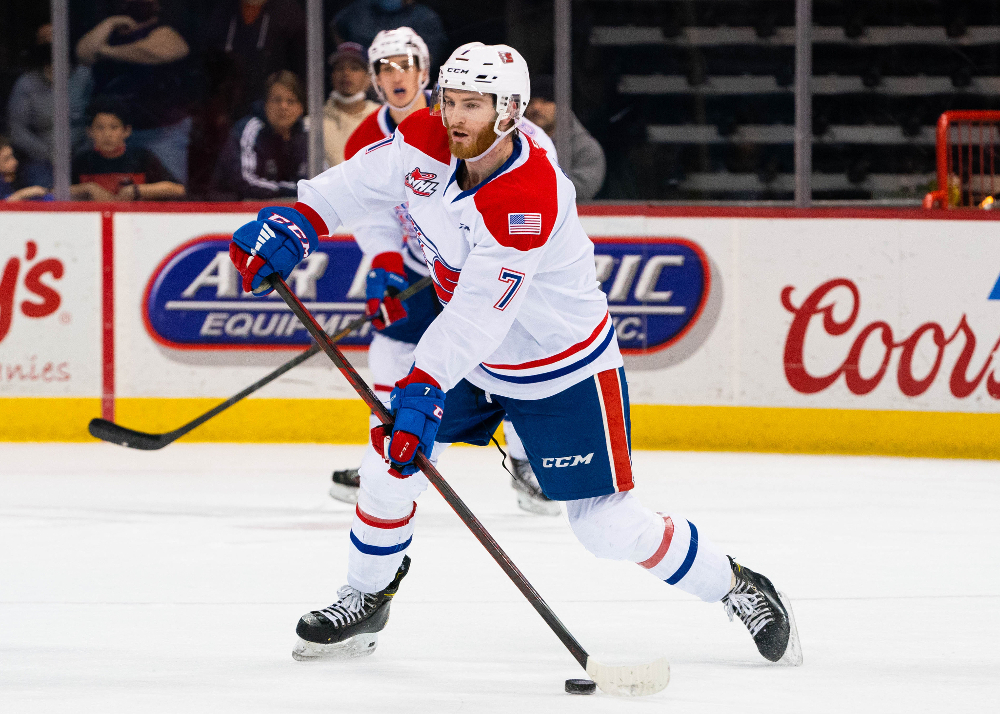 “Honestly, it was kind of just like, something like that I fell in love with at a young age.”

Spokane Chiefs defenseman Graham Sward has loved hockey for as long as he can remember. In one way or another, he says it’s always been a part of his life.

“My mom had me playing road hockey kind of in the backyard when I was two or three and that transferred to skating lessons and then eventually real hockey.”

While he says he can’t remember if he loved watching hockey back when he was two or three, he knows he’s always enjoyed it. The sport has been a family thing and, watching it or playing it, that family connection loaned itself to encouraging Sward to play .

“When it would come on the TV it always had my interest. Growing up, my cousins played hockey, dad played hockey, everyone that I looked up to played hockey at some point in time. Obviously, as a young kid, you want to be like the people you look up to.”

Another thing Sward says he can’t remember is how he started playing as a defenseman. It wasn’t a decision that he made, at least not that he knows, but the blue line has worked out for him so far.

“I think it was kind of just decided [for me]. I think my dad just kind of decided that I was going to be a defenseman. I’m not too sure how that works, but I’ve played D ever since I can remember.”

However, he’s had the opportunity to switch positions and play as a forward during a few select opportunities:

“I think I played forward in like a couple of fun tournaments that I’ve been, in the summertime, but I’ve never actually played a game it forward when it was serious.”

Serious is exactly how Graham Sward took his first draft-eligible season. While the season was shortened down to just about eight weeks of play, the defenseman missed four weeks of games. Coming into his draft+1 season, he had a different mindset.

“I think, last year, I put a little bit of pressure on myself. Probably more than should have and got hurt and that kind of thing. Things happen. This year, I was just kind of in a mentality of just go out there, play, and not worry about it. It’s out of my control. All I can do is play. The draft is coming up now, and it’s just hope for the best and see what happens on draft day.”

While the 2021 draft was perhaps a little disappointing, Sward had shown enough of his talent to earn an invitation to the Colorado Avalanche’s development camp. The experience was a great learning opportunity for the then 18-year-old Sward. The seriousness came back again, but his time at camp allowed him to see another side of it.

“Every time you go up in different leagues, there’s always kind of a different competitive nature, the scale goes up,” said Sward of the change of environments. “Jumping into the Dub was a big jump for me from midget, and jumping from the WHL to an NHL camp was also a big step, I think. Just to see how those guys do it, how professional they are about it, how serious they take everything. Not only how serious they take it, but how disciplined they are, how to stick to it. I think that was really good to see what it’s like to be a pro.”

Spending his time at camp with the Avalanche, Sward says he went in trying to be a sponge. Watching the NHL guys skate and listening to everything those running the camp and the coaches had to say, he wanted to bring all of it back to Spokane with him.

Picking up 43 points in 53 games as a defenseman and finishing fourth on the Spokane roster in points, Sward was named the defenseman of the year for the Chiefs. Before even acknowledging the recognition, the part-time alternate captain mentioned that the team was young this season. That didn’t belittle the recognition, however:

“It was a huge honor to get that [award], and I think that there were multiple other guys that could have got it. Everyone likes to be recognized but, with or without the award, I try to contribute every time I hit the ice. It’s nice to get recognized but at the end of the day, it’s not the end all be all.

Also announced at the end of the season was Sward being named Humanitarian of the Year not only for the Spokane Chiefs but also for the US Division as a whole. If you take one thing about Graham Sward from this, please let it just be this glimpse of who he is off of the ice.

“I think that [award] was kind of bigger for me, and just kind of throughout the year if I’m honest,” he started when talking about the honor.

One of the campaigns he was involved in hit a little closer to home for Sward:

“Some of it was a little personal to me with the Movember campaign right after I lost my grandfather to cancer, which started in his prostate.”

When he started to grow his mustache for his Movember campaign, Sward had a goal of raising $700. The final amount donated was over $3,000.

“The Movember campaign is about prostate and like men’s health/men’s cancer stuff, so that was personal to me. I didn’t do it for an award or anything like that. I did it because I wanted to do it and it was something that kind of hit home, and I know that a lot of people kind of struggle with different things like that. Being a part of hockey gives blood too, running a blood drive. There are lots of people that I have been close to that needed infusions and stuff like that. So I think I think both of them were just really personal things to me, and things that I care about.”

Get to Know Graham Sward

What was your favorite memory from the season?

“There’s been a lot of fun times with the guys. I’d say probably the first road trip into Canada was a big one. We were in Kelowna and, a lot of our guys being Canadian, it’s always nice to kind of come home or at least what is considered home. Obviously, not everyone’s from Kelowna but just kind of to be back in Canada. It was kind of showing that the COVID was kind of letting up a bit and the bus rides are always fun, guys playing cards or watching movies. Those would probably be up there.”

“The ferry ride to Victoria. A lot of the guys from Eastern Canada, some of them had never seen the ocean before. They thought it was so cool. For a guy like me, a west coast guy, to me, I’ve been doing it my whole life. It’s just another thing, just drive along and get on the ferry. So whatever, no big deal. But for those guys, the ferry was a shocker. Just the whole being out on the ocean kind of thing. And then, Victoria is a beautiful town. That would probably be another big moment. I think a lot of guys have a lot of fun. It was really nice in Victoria too, and we got there early and had couple of days where after practice we could kind of go do something.”

“I’ll usually get up, we usually have to be in at nine, so I usually get up around 8:15/8:30 am, and then I actually have a weird superstition where I don’t eat [before morning skate]. Just go straight to the rink. Then I’ll go pregame skate, shower there, after, then I’ll go home. I have this really specific routine. Everything has to be perfect, well not everything has to be perfect but I try to stick to a routine. I’ll go home and have like two fried eggs. And then like four or five, sometimes six scrambled eggs or egg whites and have like bacon or sausage and peanut butter toast at like probably 11 am. And then I go downstairs and nap. When all is said and done and I have breakfast made and eaten and I’m settled in my bed, it’s probably one o’clock. Wake up anywhere from like 3 to 3:30 pm. Go eat my pregame, shower, and head to the rink for the game. Do my routine at the rink and then go out and play.”

Guys typically don’t admit they have a superstition, this is actually the first time I’ve heard someone willingly say they do.

Which three teammates would you want on your zombie apocalypse team?

Where does the “Dizzle” nickname come from (also applies to “Diz”)?

“I’m actually not really sure. I guess maybe because it’s part of my Xbox name, but I don’t know where it started. When we do the nickname jerseys, that’s always what’s on mine.”

Erik Atchison also mentioned it being part of his Xbox name, so it sounds like that’s as far as we’ll get in this investigation.

If you were a fruit, which fruit would you be?

“I want to choose something kind of exotic, a banana or an apple are kind of boring. Oh, I’d be a kiwi.”

“Kiwis are hairy and I can grow a mustache in like two weeks.”

“That’s awful, and you can tell him I said that.”

Okay, well what would you say Beaupit would be?

You just said being a banana would be boring.