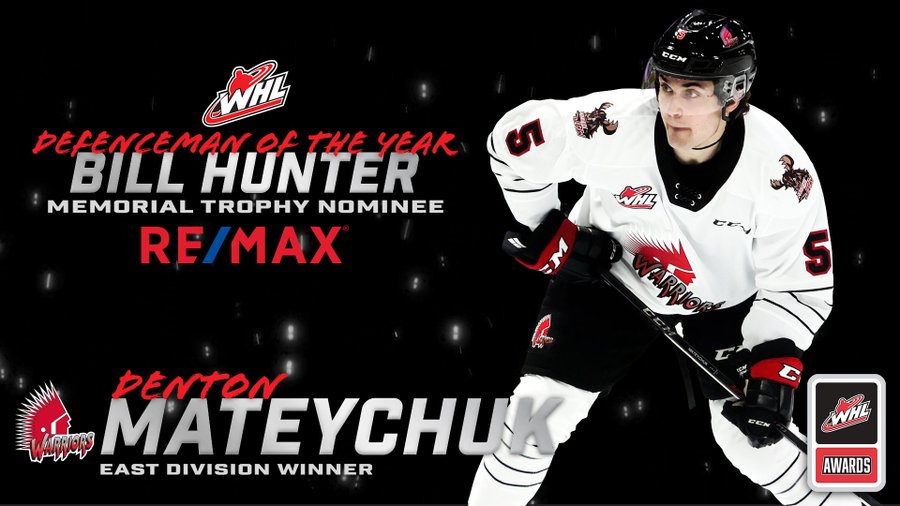 July 7, 2022. For many, this is just another unremarkable day on the calendar. But to Denton Mateychuk, a talented defenceman for the Moose Jaw Warriors, there is an immense amount of excitement for this date. The 2022 NHL Entry Draft, held July 7-8, 2022, will jumpstart the professional career of many young players, and Mateychuk hopes to be one of them.

Described as an offensive defenceman, Mateychuk has been making impressive strides with the Warriors. He posted 64 points in 65 regular-season games, and averaged one point per game in the 2022 WHL Playoffs. Known for his involvement on the ice, Mateychuk is drawing the attention of many NHL scouts, and rightfully so.

Mateychuk’s style of play has been compared to that of Ryan Ellis, Jake Bean, and Quinn Hughes, and he models his game after Rasmus Dahlin. He is consistently a part of many excellent plays, creating scoring opportunities for himself and his teammates. His passes are a sight to behold, really shining a light on how high his hockey IQ is.

His style of play has been described by many NHL scouts as unique and individualistic. He is always involved in the play, touched on by Mitch Brown at Elite Prospects: “There isn’t a 2022 draft-eligible prospect more involved in any game than Mateychuk. He’s an extreme—the most activation-focused defenceman to come through the draft in recent memory that isn’t named Owen Power.” He takes risks but makes incredibly smart choices on the ice, reads plays well and communicates with his teammates with what seems like telepathy.

Many scouts have remarked on his skating, some pointing it out as something that can be improved while others have praised it, stating it’s one of his most impressive skills and that he may just be at the top of the 2022 draft class with it.

His size has been another topic of discussion, coming in at 5’11 and 194 pounds. Many remain optimistic, however, because Mateychuk, at seventeen, is one of the youngest in the 2022 draft, and is still growing. Scott Wheeler from The Athletic states, “He’s already a plus-level skater, which helps him escape pressure with his feet, walk the line, and steer opposing players into tough spots despite not being the biggest guy. He’s the definition—or close—of the modern defenceman.”

‘Modern’ has been one of the most popular words to describe Mateychuk’s game, with his skill and creativity on the ice. He works on his strengths, which include his elusive skating, shot intelligence, and his passing vision and creativity. Sometimes called a ‘unicorn of a defender,’ Mateychuk is definitely one of the top defencemen in the Western Hockey League.

Selected 11th overall by the Moose Jaw Warriors in the 2019 Bantam Draft, Mateychuk has been proving himself time and time again. He won a gold medal at the 2021 U18 World Championship and was named captain for Team White at the 2022 Kubota CHL/NHL Top Prospects Game, where he played alongside his Warriors teammate Jagger Firkus. For the 2021-2022 season, Mateychuk was fifth in the WHL in defencemen points and 46th in the entire league. For U18 defencemen, he was second only to Kevin Korchinski of the Seattle Thunderbirds, trailing by only one point. With 30 even strength primary points, he had the most out of all WHL defencemen.

Mateychuk could go as early as mid-first round, with his highest projected ranking as eighth overall. He is an incredibly talented player, and WHL fans across the league are excitedly awaiting his name being called at the 2022 NHL Draft.