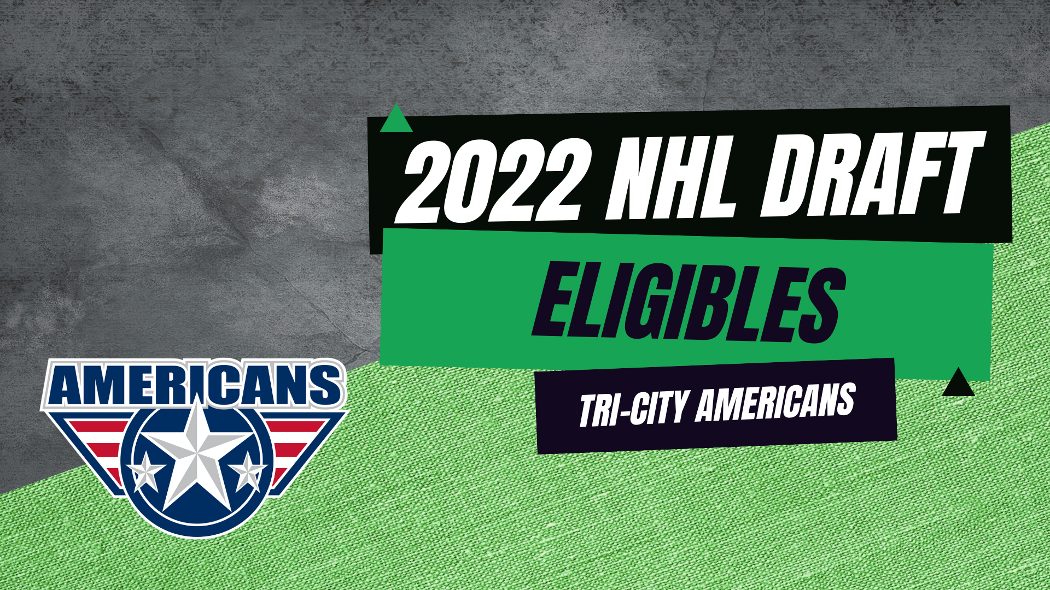 After trading goaltender Talyn Boyko to the Kelowna Rockets early in the 2021-22 season, the Tri-City Americans had no NHL drafted players on their roster. They won’t be able to say the same thing in the upcoming season.

With almost 20 draft-eligible players appearing in games for the Americans during the season, there are plenty of chances for NHL clubs to snag a Tri-City standout in the fast-approaching draft. Here’s a look at a nine of the names fans may hear called in July.

There have been times this season when it seemed Jake Sloan was a popular name in discussions online, but there have also been times when it seemed everybody forgot about him. That feels pretty accurate of a description of how Sloan’s game has been recently, but it’s not a bad thing. At 6-foot-4, 215-pounds, he tends to be one of the bigger guys on the ice. With 17 goals and 16 assists in 53 games this season, Sloan showed that he could keep up in the WHL, but he is poised for an even more successful 2022-23 season. It’s possible he gets picked up as a mid or late-round selection in just under two weeks’ time.

If you’re looking for a player that is fun to watch, Dwayne Jean Jr. is someone you should keep an eye on. He’s also one of the nicest players you could come across, but that’s not the biggest thing teams are looking at. This also works out for Jean Jr. as he’s also one of the hardest working guys on the ice every night. While his 10 points in 53 games aren’t going to jump out to you when looking at the numbers, his time is coming. Plus, if your team needs a reliable shootout scorer, this 5-foot-10 forward could be your guy.

Also, please enjoy one of the best tweets on the internet:

The player they call “Frenchie” appeared in 38 games for the Americans this season. He tallied one goal and four assists in his rookie campaign and while he didn’t draw your eye negatively, he often didn’t stand out in games throughout the year. He will have a chance to come back to the WHL next season and show off stronger elements of his game.

Though he is an ’03-born player, this is the first NHL draft Bell is eligible for as his birthday falls after September 15. The 6-foot-4, 200-pound forward is one who found another level to his game as he entered his third season with Tri-City. He finished the season fourth among the Americans roster in shots on goal and 18 goals to go along with 31 assists in 64 games. While his game could use some polishing, he sits at 112 on NHL Central Scouting’s final ranking of North American skaters and some NHL team is going to be excited to add him to their organization’s prospect pool this July.

Moravec was just invited to Czechia’s 2022 World Juniors selection camp. In his rookie WHL season, the 6-foot tall forward picked up 16 goals and 19 assists through 68 games. It still feels like there is a skill to his game that we haven’t seen. That could intrigue some teams at the draft, however it could also turn some off of him because they want to wait to see what he does in the coming season.

The captain of the incoming 2022-23 Tri-City Americans, Lajoie is one of those players you can’t help but want good things for. To be honest, he isn’t the most fun to watch skate, but he makes it work. At 6-foot-5 and 220-points, is skating really what you’re looking for from the blueliner anyway? With 12 goals and 26 assists in 68 games with the Americans this season, Lajoie displayed improvement from previous seasons and could be a fantastic depth add for an NHL organization.

Coming into the season with just six games of WHL experience, Alex Serraglio is one of the defensemen who didn’t get as much talk throughout the year. One goal and 10 assists in 67 games this season are just the start in this league for Serraglio. You heard it here first.

At times throught the season, Nick Avakyan has been asked to stand on his head for the Americans. Specifically, in the December 28 tilt on the road against the Portland Winterhawks, Avakyan stood in net and battled through an entire game where he had no backup netminder to relieve him. At times in the game it looked like he could have used someone to go in for him, but he stuck it out and the game became a moment to talk about for fans of both teams. The Americans lost that game, but came back on January 15 and Avakyan had an outstanding outing, making 44 saves and leading the Americans to a 2-1 shootout victory.

Joining Moravec at Czechia’s selection camp for the 2022 World Juniors, Tomáš Suchánek continues to impress and show why he shouldn’t be overlooked heading into the upcoming draft. Teams looking for a netminder who plays with heart and who can be a reliable prescence and keep their team in games night after night should look no further than Suchánek. On NHL Central Scouting’s final ranking of North American goaltenders, Suchánek is found in the 12th spot on the list and it’s been a well deserved rise throughout the season.

As per usual, this entire thing is my biased draft thoughts. I’m not a scout and don’t pretend to be.

On that note, the Tri-City Americans sported one of my favorite goalie tandems in any league during the 2021-22 season. They faced an onslaught of shots in just about every game and yet still managed to come out of them looking like they could steal a game at any point.

Dwayne Jean Jr. is another player that simply will do nothing but get better as time goes on and if he’s not taken this summer, I have no doubt teams will be kicking themselves for not picking him up before his numbers skyrocket.

Personally, I had high hopes for Elouann Lemonnier at the beginning of the season, and while I was a tad disappointed in the final results, I enjoyed watching him in the games he got into.

Parker Bell and Jake Sloan were also exceptionally fun to watch for me, and they really seemed to get going in the second half of the season.