Josh Mori: Like an Apple for the Portland Winterhawks 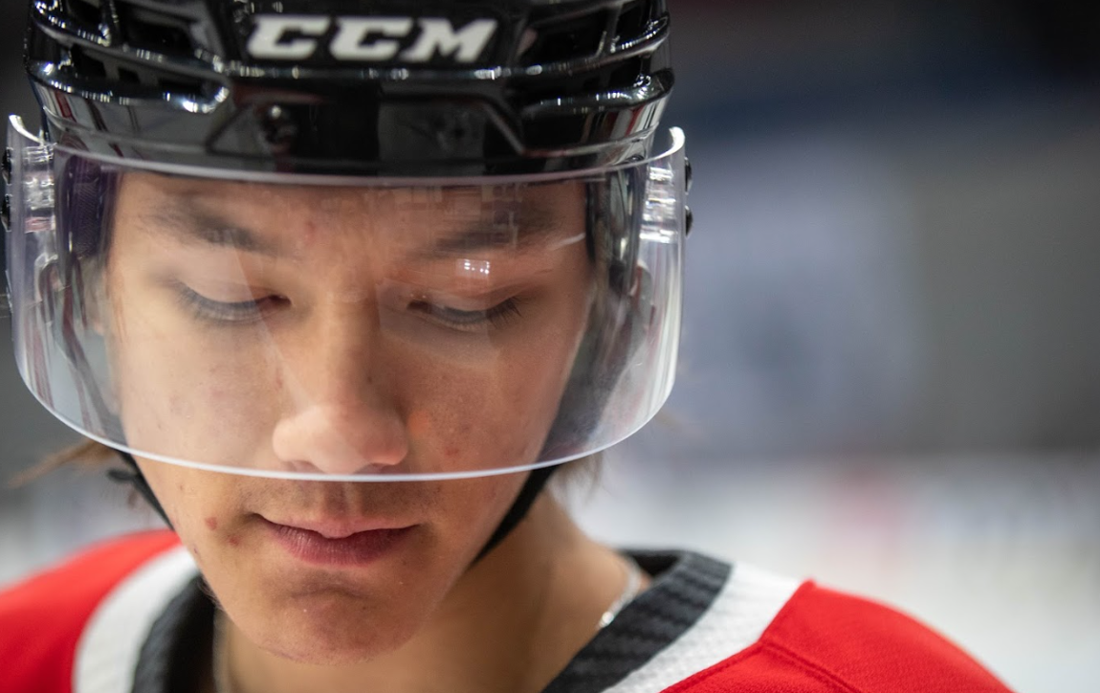 “I think I’d just go with an apple. You can have it whenever, it’s not just a summer fruit.”

That was Portland Winterhawks defenseman (hold on to that) Josh Mori’s answer when asked what kind of fruit he would be if he could pick.

Josh Mori’s hockey journey started when he was just three or four years old, however, it didn’t start with hockey in mind.

“So a little bit of funny story,” Mori laughed when asked about how he got into the sport. “When I was a little kid, my sister did figure skating.”

According to his father, the toddler Mori used to run out onto the ice to follow his sister, so of course, he was soon signed up for figure skating lessons of his own. Unfortunately, they didn’t go so well.

“I ended up just like sitting on the ice and drawing with the markers all over the ice.”

“I would just stand in front of the net and just slap shots on net. I told him that I loved it, so he just signed me up for hockey. Since then I’ve just kept playing.”

Before the switch to hockey, Mori said he didn’t know much about the sport. After he started playing, his dad started taking him to Vancouver Canucks games, and that’s how the future Portland Winterhawk found his favorite player: Dan Hamhuis.

“I always loved watching him because I wore the same number as him and he was a left defenseman like me, so I always thought it was cool to play. I kind of just grew up loving him, and that kind of got me more and more into hockey.”

The move to defenseman came during Mori’s time in Atom hockey (ages 9-10), when his coach made the decision. Mori’s father let the coach know that the youngster had never played the position before, but he was encouraged to try something new. Another step that worked out, because Mori ended up liking it and he has been a defenseman ever since… kind of.

Well, I think I was I played forward until Atom and then in atom, I think my coach told said to my dad like oh, we’re gonna put him on D and my dad was like he’s never played they were like it’s okay just try something new and I got put on D and I really liked it so I just I stuck with that

Josh Mori signed with the Portland Winterhawks on March 2, 2020 and made his WHL debut with the team on October 10, 2021. In 36 regular-season games throughout the year, Mori picked up 2 goals and 6 assists while spending many of his games playing as a forward.

“It was definitely not something I’ve done before, but I found that I adapted to it fairly easily because I tried to keep it simple, straightforward. I wasn’t trying to do anything crazy. I just tried to keep pucks in, get on the forecheck, and make sure that nothing comes against us in our D zone too.”

The need for Mori to play out was due to a shortened Portland bench at times throughout the year. When the coaches asked the first-year Winterhawks if he’d be willing to switch positions from time to time Mori replied with:

“I’m perfectly fine with that, I’ll do whatever.”

Not only was this Mori’s rookie campaign, as a 2004-born player it was also his draft season and he says his strength lies in his skating. Throughout the season, Mori put his ability to good use whenever he stepped onto the ice.

“That’s just kind of like my game. I like to kind of get the first past out of the zone. So I would say something to watch would be just me skating up and down the ice.”

This summer’s NHL Draft was not something at the forefront of his mind, however, he was instead more focused on what he could add in a different role.

“I was just more worried about how I could help the team because I played in a different position than normal, so I was just trying to find ways that I can help on the bench and on the ice and just help get wins for the team.”

Well, it worked out well and the Portland Winterhawks certainly got wins, hitting an incredible stride in mid-November and carrying it through to the end of the regular season.

The Winterhawks didn’t end their success there as the WHL saw their first playoffs since 2019. Mori appeared in nine of the team’s 11 games in the postseason, including all four games of the first-round sweep over the Prince George Cougars. Unfortunately, the Winterhawks were eliminated in a thrilling second round that saw Portland and their long-time divisional rival Seattle Thunderbirds go the distance in the best-of-seven series. Despite their playoff run coming to an end, Mori maintains that it was an incredible learning experience for many of the younger guys on the team.

“It was a really cool experience because I’d never played in a playoffs that was a best-of-seven. And you’re playing, a team like Prince George that’s 12-14 hours away, so it’s a lot different than during the regular season. It was really exciting. I think we had a pretty young team, so I thought it was great that we got far. When we came up short, it was tough for sure, but it’s good that we all have that feeling. Now we know what it feels like, and I think we all don’t want to feel that again. I think it will be a good motivator for next season.”

Next season will see its fair share of new experiences as the US Division will be seeing games against the Central Divison for the first time since March of 2020.

“I think that’ll be really cool,” Mori said of facing some new opponents. “Again, that’s not really something I’ve done before so I’m really excited for that kind of experience too, playing those teams.”

Get to Know Josh Mori

What was it like playing against/with former CSSHL teammates Lukas Dragicevic and Kyle Chyzowski?

Is there a little extra chirping in games against Dragicevic and the Tri-City Americans?

“There’s a video,” Mori laughed a bit about this. “I was playing forward and he was on D and we are just like going out in front of the net and I think it’s so funny. But yeah, there’s a couple of words exchanged.”

If he could choose a personal goal song, he’d pick:

“I don’t know. It just gets you excited, so I think it would be really cool. It’s a simple song. Everyone can sing to it too.”

“Not many guys played music, but I did like it when we changed it to listening to rock before games. I think that was Hondo. Clay Hanus. I think it was him who was playing that and I liked his music.”

“I don’t know because I don’t mind any of the music so I don’t really have the, oh, I don’t like this music kind of thing.”

“I wouldn’t say in the offseason, but during the season, yeah. I’d say I play a bit with all the guys.”

What game is played the most?

“This year, I played a lot of Fortnite.”

Favorite place to drop in Fortnite?

“Mine would be Tilted Towers. That would be my spot.”

“A perfect pizza would obviously just be like a meat lovers sort of thing. So, whatever’s on there because I like those.”

“I’m a pretty plain guy so like I’d have to go with salami, lettuce, cheese, and mayo. Just simple.”

Best nickname on the team?

“The one that would come to mind is Hondo. I just like how that comes off. There’s no really goofy ones on the team.”

What’s your nickname from the guys?

Three teammates he’d pick to be on his zombie apocalypse team:

“I think I’d pick up three other ’04 D’s: Luca [Cagnoni], Marek [Alscher], and Ryder [Thompson] just because we’re pretty close. I feel like that would be pretty fun.”

What everyone’s roles would be:

“I’d make Marek the hunter, the warrior guy. Cagnoni, maybe like the chef or the cook. I think Ryder would be a pretty good strategy guy, maybe along those lines.”

What his own role would be:

“Myself,” he laughed, “I’d just make myself like the coordinator or something.”

For the record, both Cagnoni and Thompson had Mori on their teams as well. They both also had Alscher. There’s a theme here. (Note: Marek Alscher was not asked to pick his zombie apocalypse team)

“So many. I’m going to go with… I think it was near the end of the season. We were on something like a 12-game winning streak and we beat Everett in our last game. All the guys and everyone was so happy. It was a really good way to go start our playoffs andt was just such a great feeling.”

Before any of you get upset, the Winterhawks were 10-2 in their last 12 heading into their final game of the season against Everett.

Teammate(s) to watch in the upcoming season:

“Marek, Cags, and Marcus Nguyen all had great years this year and next year they’re going to get even better. They’re going to be really exciting to watch.”