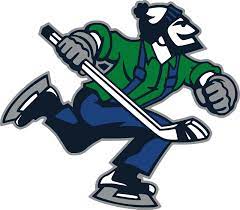 On Saturday, the Abbotsford Canucks announced the signing of Kamloops Blazers co-captain and defender Quinn Schmiemann to a two-year AHL deal. As part of the contract, he will be invited to Canucks prospect training camp which is set to run from July 10th-15th at the University of British Columbia

Originally a draft pick of the Tampa Bay Lightning, the 2019 sixth rounder joins the Canucks as a free agent. During his five-year WHL season, Schmiemann played 201 games scoring 26 goals and adding 136 assists. He also suited up for 23 playoff games registering 20 points. During the 2021-22 season, he was named to the WHL BC Second All-Star Team.

Schmiemann now joins former WHLers including Alex Kannok Leipert and Tristen Nielsen as players to sign with Abbotsford after completing their WHL careers. The Saskatchewan native should provide the Canucks with strong play in the defensive zone as well as some offence during his first AHL season.