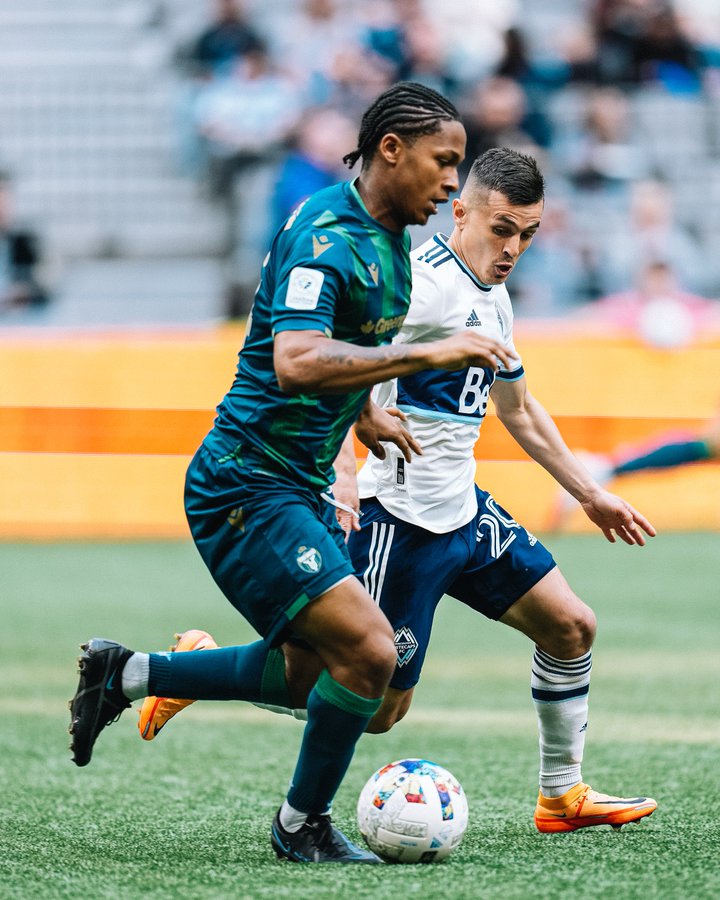 The Vancouver Whitecaps exorcized their CPL demons definitely, winning against all three clubs they faced in the Canadian Championship.

York United FC came to BC Place, having won both their previous matches in this competition in penalty shootouts, but the Whitecaps had designs to finish the game well before that point.

Vanni Sartini led with an attack-based lineup, highlighting the importance of this match for the club.

Three Canadians got the start against York. Ryan Raposo was at right wingback. Russell Teibert was back in the midfield where he started most of the matches earlier this season.

Lucas Cavallini was given the start as well up top alongside Brian White. Cavallini has been the in-form player over the past couple of months and given the necessity of Canadian players required for this match, he was considered a lock.

Ryan Gauld slotted in at the no. 10 position just behind the two strikers. Both Gauld and White had been rested in the previous MLS match against FC Dallas, only coming on as subs. It was expected both would get the start today.

Newcomer Andres Cubas got his first start at BC Place as well, taking up position beside Teibert. On the opposite wing to Raposo, Cristian Dajome was put in at left wingback.

Dajome had a few matches earlier this season in wingback to some success, but he never seemed comfortable in the position. Sartini had praised his pace and ability in 1v1s, which is something the Whitecaps would require from the Columbian.

The back 3 had one moderate success in that Ranko Veselinovic was on the bench. The centre-back has been a mainstay this season, but a midweek game is a good time for a rest given the upcoming MLS schedule.

Instead, Florian Jungwirth was given the middle spot with Jake Nerwinski and Eric Godoy on either side.

As expected, Cody Cropper was between the sticks. Thomas Hasal is well on his way to recovery, having rejoined full training earlier this week, but he was deemed not yet match fit.

Sartini went with a strong attacking lineup here. It’s one where the pace of the two wingbacks would be relied on. Questions could be raised about the backline with the absence of the height of Veselinovic.

Jungwirth in the middle of the back 3 is a new spot for him as his centre-back time so far with the Whitecaps has been in one of the sides. But his vocal leadership is something that could make this work.

The wingbacks were also likely to switch play. Raposo’s goals this season have largely come from the left, while Dajome has played both on the left and right.

The Whitecaps took early possession in the game and did not want to let it go. However, while they were able to penetrate into the final third, there was little to show for it.

Nerwinski was involved in a few challenges early on down the left side of the pitch. The centre-back was up for this game, winning key tackles and being proficient in collecting the ball and passing it quickly up the flanks.

York was showing exactly why so few goals have been scored against them. Their defence was quick to stifle any Whitecap chance. Several balls were crossed in high, but picked off every time.

But it did lead to three corners in the first 15’ for the Whitecaps, which was a fair reflection of their dominant play to begin the match.

The Whitecaps’ best chance came in the 29’ with a quick round of passing to move the ball quickly on the counter. Cubas got control in the defensive half and turned quickly to dish it up to Gauld. The Scot kept up the quick play, playing it onto the running Cavallini behind York’s defensive line. But while the shot had power, it was into the safe hands of Nikolaos Giantsopoulos.

Cavallini helped to create another chance a minute later. He held up the ball in the 18 yard box and passed out wide to Raposo, who crossed it quickly back in over the head of the Canadian striker. It made it to Gauld, but his header was wide of the far post.

York had an opportunity of their own in the 32’ as Godoy lost sight of the ball as it was crossed in. Osaze De Rosario got in behind the defender to get the ball, but Jungwirth was quick to help out his fellow centre-back and clear the ball out.

The Whitecaps had the bulk of chances in the half. The racked up 13 shots (4 on target) to York’s 2 (1 on target). However, both sides went into their lockers rooms tied.

There must have been a discussion in the York locker room at halftime, but they came on for the second half pushing high into the attacking third, energetic and hard.

In the attacking phases, only their two centre-backs were left back, leaving opportunities for the Whitecaps to counter.

And while it was York who was changing their game plan, it was the ‘Caps who hit first.

Raposo brought the ball down on the edge of the 6-yard-box and took it in midair. His shot-cross fooled Giantsopoulos, but not the post.

The rebound bounced directly in front of the net and onto the feet of White. The striker took it quick and put the Whitecaps up 1-0 in the 53’.

But York kept up with their aggressive play, pushing at any opportunity they had.

They were awarded a free kick approximately 25 yards out in the 62’. It was taken low and hard, rounding the wall and into the near post. Cropper was alert to it and got low to make the save off the line. It was York’s best chance of the night.

White was not finished on the night. In the 73’, Gauld got on the end of the ball on the left and crossed it low and hard. White took it as it bounced off the pitch, volleying it in for his brace.

But York kept fighting. In the 85’, Isaiah Johnston got around Nerwinski and hit low into the net past the sprawling Cropper. It made for a nervy last few minutes of the match.

The final minutes of the game and stoppage time had York throwing everything forward. The Whitecaps almost had a third when Tosaint Ricketts cut in from the right. While he had two options to the left to pass, he hesitated in shooting, which allowed the York defence to get back in position.

It played out until the end, with the final being the 2-1 scoreline. The Whitecaps qualified for their first Canadian Championship final since 2018. They will face Toronto FC at BC Place on a date to be determined.

The first half was difficult for the Whitecaps to break down York’s defence. But Sartini said they were helping York in their job rather than being effective in being clinical.

“We were breaking the first line of pressure, but our wingbacks were slowing the game,” he said.

But the Vancouver head coach said his team was able to refocus in the second half and play in the manner that had gotten them to this position so far.

“We need to trust the process and that’s what we did in the second half,” he said.

Looking ahead to the final, Sartini said playing it at BC Place gives them a 51 per cent edge because of what the fans give the team.

“We fought to the bitter end, made it close…proud of the guys,” he said.

White, who got both Whitecaps goals, said his production tonight has been something he hoped for.

“It’s important to get to the final, help the team win and score two goals to get the monkey off the back,” the striker said.

It was White’s game tonight. He led the team with six shots. Both his shots on target ended up as goals. He also had an xG on the night of 1.19, the highest of any player.

The Whitecaps are back in MLS action on Sunday, June 26 against the New England Revolution. The game is at BC Place at 5 p.m.