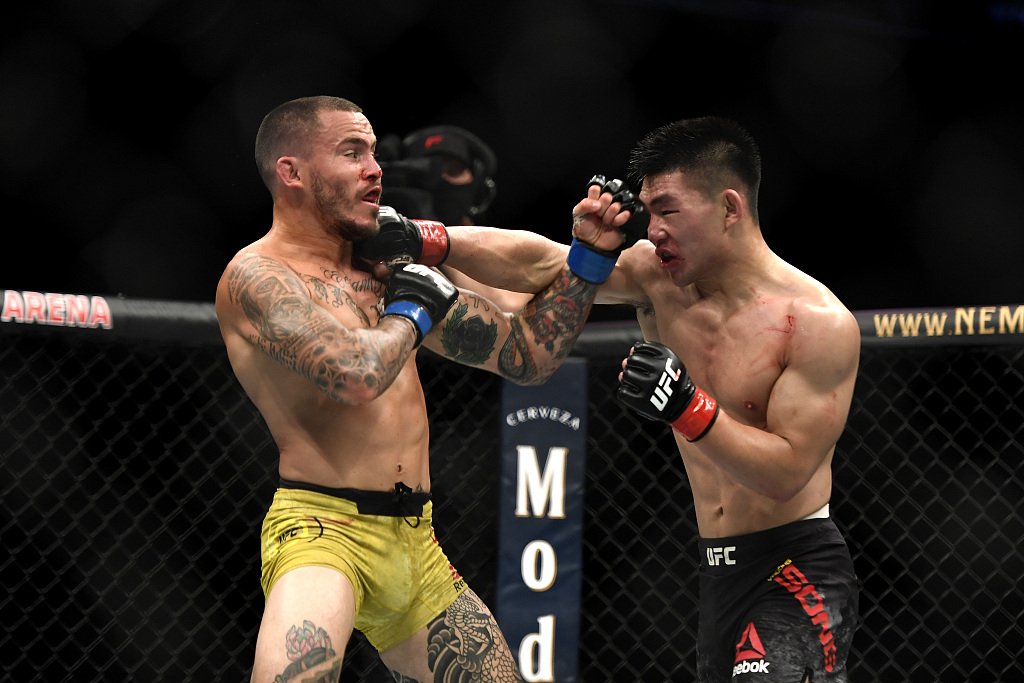 One week is left until the next PPV and we’re going to see two of the best bantamweights, Rob Font and Marlon ‘Chito’ Vera, square off in the main event brawl. Throughout the rest of the card, we’re also going to be treated to the return of UFC veterans Andrei Arlovski, Andre Fili, Darren Elkins and Gerald Meerschaert. Finally, after much delay, we’ll (hopefully) see Alexandr Romanov return and square off against Chase Sherman. All of these matchups (plus more) are covered below and feature BLÜ’s predictions along with the Bet99 Sportsbook Odds.

He doesn’t have the best record, but Meerschaert has been around the UFC since 2016. He’s got his fair share of wins with a record of 9-6 in the UFC, but any time he’s faced a ranked opponent or one near the rankings, he’s lost. These losses include Hermansson, Holland, Heinisch and, most famously, Chimaev. Jotko finds himself in a similar position; he’s been in the UFC since 2013 and has earned a record of 10-5 here. He’s got a couple more slightly more impressive wins over Cirkunov and Anders, but he too has struggled against ranked contenders like Hall, Tavares and Strickland.

This one is about as even as it could be. They’re both a similar age with similar reach and experience. This could go either way, but I’m giving the slight edge to Jotko because of his recent performances and his history of decisions. Jotko’s fights tend to end in decisions, while Gerald’s fights end in finishes from either side. That tells me that Jotko can withstand heavy offence and get off his own, while Gerald could be too reckless. I think Jotko’s plan will succeed and he’ll outpace Meerschaert to win a close decision.

This is a matchup you’d tend to see in the prelims; it’s one that we normally wouldn’t be analyzing. Elkins has been around the UFC since 2010, racking up quite a few wins since then. Older MMA fans will know him, but since his 4 fight losing streak from 2018 to 2020, he hasn’t grabbed the same level of attention. Since those losses he’s done better, going 2-1 with a stunning KO loss to Cub Swanson in his last. Connelly is much newer to the UFC with only 2 appearances so far. He made it to the end of both those fights with a decision loss to Sabatini and a win over Michel Pereira in 2019.

This is another coin toss for the night. They’re the same age and seem to be quite equally matched. The main difference is, of course, the wealth of UFC experience that Elkins holds. He’s more experienced, he’s been more active and he also has a slight 3-inch reach advantage. It will be close, but I’m giving a slight edge to Elkins thanks to those factors.

Jared Gordon has done fairly well in his UFC career with a record of 7-3. Sadly, almost all his wins have come by decision and he was finished by the only two noteworthy names on the list: Oliveira and Ferreira. Dawson hasn’t been around as long but has done very well since getting his contract on DWCS. In his first 6 fights in the UFC, he’s gone unbeaten with a 5-0 start and a draw in his last one with Ricky Glenn.

Just like all the other fights on the main card, this one is dead even. Dawson has been doing well, but hasn’t quite fought the same calibre as Jared Gordon. The difference for me is their recent history. Gordon has won 3 in a row since his loss to Oliveira, but they’ve all been decisions (and one of them was split). Meanwhile, Dawson hasn’t lost yet in the UFC and has grabbed 3 finishes. This finishing power, plus the fact that he’s slightly younger and has a 4-inch reach advantage, lends an edge to Dawson and may even mean we could see a finish.

Andre Fili is a fan favourite of the UFC, making his debut all the way back in 2013. Since then his record has been about 50/50, but most of his losses have come to some of the best featherweights in the UFC like Mitchell, Yusuff, Kattar and Yair. Brito looked as though he was going to storm the division after he got his contract on DWCS but sadly, lost by decision to Algeo in his debut a few months ago.

Brito is a promising prospect, but he just doesn’t have the skill, endurance or experience to fully match up with someone like Fili. Fili should be able to pick Brito apart on the feet and keep his distance. Since Brito slowed down as his fight went into the later rounds, Fili should be able to use his stamina to secure the 2nd and 3rd rounds to win decisively. Even though I think Fili will walk away with a convincing win, Brito is VERY tough and will likely survive to see the final bell.

We’ve talked about Arlovski a lot on this show, so by now, we should all know that he’s one of the biggest and best veterans currently in the UFC. Although ranked contenders like Aspinall, Rozenstruik, Sakai and Tuivasa have been problems for Arlovski the past few years, he’s been using his unmatched experience to beat everyone else recently. Collier has also been around for a while, joining the UFC back in 2014. While he’s also lost to Aspinall, his other losses haven’t been as noteworthy.

Just like his last 3 fights, it seems as though this is going to be a case of Arlovski grinding his opponents down over 15 minutes to grab a decision. Most of Collier’s fights have ended in a decision; that tells me he won’t have the power or skill to finish Arlovski. If he can’t finish him, I don’t really see how Collier could win the fight.

Closing out the night is the most exciting ranked bout we’ve had in a while; a bantamweight brawl between number 5 contender, Font, and 8th spot Vera. Font is coming in as one of the best strikers in the division, while Vera is more well-known for his grappling. After jumping to the top of the rankings with wins over Ricky Simon, Moraes and Garbrandt, he lost in his last outing, headlining a main event in December against Aldo. Vera has jumped up the rankings as well recently with a loss to Aldo and wins over Davey Grant and Frankie Edgar.

The fight has the potential to end with either man on top, especially in a 5 rounder. The thing that sticks out to me is their last performances. Font lost to Aldo, but even though he was getting pounded by one of the best UFC strikers in history, he held his own and made it to the final bell. Vera may have won against Edgar, but he was losing on the cards up until he landed a HUGE front kick that ended the fight. With that in mind, I don’t think Vera can finish Font, plus, I think Font can out-strike Vera and win a close decision. Vera’s grappling will be a problem, but I think Font can overcome it.

Originally this was a much closer matchup between Tanner Boser and Romanov, sadly Boser had to pull out of the fight and we were left with Chase Sherman. Then, Sherman was the one to pull out on fight day last week, but they’re back now. In the original matchup, Romanov was likely going to have a tough time but still seemed to be a fairly heavy favourite in the matchup. In this matchup, Romanov is just that much heavier of a favourite. This is a perfect matchup for him. Romanov joined the UFC fairly recently, going 4-0 so far, extending his undefeated record to 15-0. Most recently, he proved how big of a threat to the division he is by finishing Jared Vanderaa in the 2nd Round. Sherman is also fairly new to the UFC and grabbed a win in his debut. After that he was thrown into the deep end of the division, losing to Arlovski, Porter and Collier.

Unfortunately for Sherman, there are some very cjulear differences between these two men and most of them favour Romanov heavily. Romanov has only been in ONE decision in his whole career, meaning he’s got 14 finishes in 15 fights. Romanov is one of the best, strongest wrestlers in the heavyweight division. Finally, he also cuts down to make 265 pounds, while Sherman doesn’t cut much weight, landing at around 250 pounds regularly. That may give Sherman a speed advantage which he could use to land a sneaky one on Romanov. The problem is that Romanov is VERY tough, can stand up to that power, walk through it and slam Sherman on the canvas. I think that’s exactly what we’ll see and Romanov will continue his finishing streak.

Here I highlight some betting lines that you might want to take advantage of for UFC Vegas 53. These are odds that favour the bettor. Although some of them may conflict with my picks, they offer a fair reward for a slight bit of risk.

Dawson has 3 finishes in his 6 UFC fights and Gordon has multiple stoppage losses in the UFC. The matchup isn’t wildly one-sided, but, with everything together, it seems likely that we’ll see a Dawson finish in under 2.5. At +166, it’s well worth the risk.

While Fili seems to hold some clear advantages in the matchup, Brito is a VERY tough fighter who has never been finished. Fili is also extremely tough and hasn’t been finished in his last 11 fights, plus, the vast majority of his fights have reached a decision. With their combined toughness and tendencies towards decisions, -186 is a great betting line.