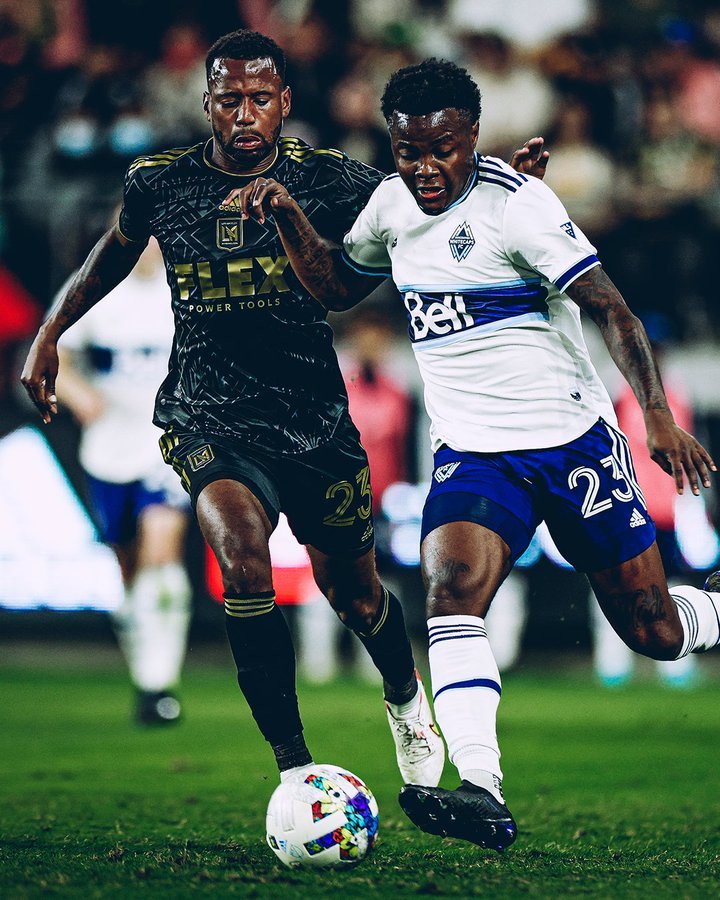 The Vancouver Whitecaps started early, but were unable to maintain their early goal lead against the undefeated LAFC. The Canadian side fell in the away match, 3–1.

The match saw the ‘Caps come up against a familiar face in Maxime Crépeau, now the starting goalkeeper for the Californian club and he has kept up with his stellar play, only now it’s against the players with whom he knew so well.

Vanni Sartini made four changes to his starting squad compared to the match last week against Houston.

Immediately apparent was the loss of Ryan Gauld in the middle of the pitch. He’s been dealing with a difficult abductor. The ‘Caps are also still missing Brian White, which means that Sartini went with a solitary striker up top with Lucas Cavallini.

On the back line, Jake Nerwinski got the start ahead of Florian Jungwirth.

But the bulk of changes occurred in the middle. Both wingbacks were new, with Marcus Godinho and Javian Brown getting the nods. Sebastian Berhalter played along Russell Tiebert as Leonard Owusu started on the bench.

While the wingbacks were likely the biggest surprises for most, they shouldn’t be. Gauld’s injury pushed Cristian Dájome further up the pitch, opening the spot at right wingback where he had spent the first few matches of the season.

With his move up, Brown was the likely replacement. But seeing both wingbacks replaced was not something to be expected, especially since Cristián Gutiérrez had been quietly doing a decent job in his position.

This could be simply a case of trying to give Gutiérrez a rest ahead of his upcoming match with the Canadian Men’s National Team, one would hope that wouldn’t factor into the decision of a domestic side. I also favour Gutiérrez over the more traditional fullback play of Brown.

The Whitecaps started well in the first 15 minutes. They held their own in terms of possession and seemed comfortable with the ball.

It paid off. Tristan Blackmon nabbed his first goal as a Whitecap and first against his old team off a free kick that was headed on by Cavallini. Again, Cavallini worked with what little service he had, and his assist was a result of that.

But you could also see his frustration on the pitch. He was denied a foul towards the end of the half as he spent much of his time tracking back to try and win balls himself rather than having them sent up to him by the rest of the team.

That service was lacking because of the nature of passing. The ‘Caps ball movement was mostly lateral or backwards with very little going forward.

Berhalter tried at times to move the ball up along the sides. He also showed promise in intercepting passes. But his clearances were suspect, even kicking the ball into his own head at one point.

The ‘Caps had a great chance to pull two ahead as Dájome and Cavallini went 2v1 in the 16th minute.  But Dájome chose to shoot from the top of the box rather than pass to the wide open Cavallini. The play resulted in a wasted opportunity that fizzled out.

It was enough for LAFC to wrestle control of the game back into their favour. Their first goal in the 26’ came off a corner kick by Ryan Hollingshead who was able to get away from his man, Berhalter.

Their second in the 27th minute saw Mahala (Kwadwo Opoku) weave through three stationary Whitecaps players and pass off to Carlos Vela. Thomas Hasal was able to make the first save, but not the second.

It was a tale of two different Whitecaps, and unfortunately, LAFC was able to take advantage.

The second half did not bring any change to the quality of play. Instead, the frustrations of a few players kept peeking through.

Without Gauld, Cavallini was left to drop deep to win balls. But no one was running forward to fill his vacated space in order to get on the end of his crosses. The striker threw his arms up more than a few times in frustration at his teammates.

Mahala kept up his pace and was the dominant threat to the Whitecaps at the other end of the pitch. Time and time again, Brown was skinned 1v1 as the LAFC winger blew by the wingback, giving him space to cross the ball or dribble it inside the box himself for a shot.

Hollingshead hit the ‘Caps off the corner again in the 69th (nice) minute, netting a brace and giving us the final 3-1 score.

“We knew coming here, they are probably the best team in the league, to be honest, in terms of talent,” he said.

The players also know they need to step up. But Brown was quick to say that there is still positivity in the dressing room.

“Everything is on us,” Brown said. “We can’t blame anyone but us. But I think this is a great group. We’re going to get things right.”

Hasal said it’s no secret this is not the start to the season the Whitecaps wanted. He sees stretches that are good, but more must be done to maintain those stretches.

“In each game, we’ve had spells where we’ve played well and shown what we can do”, said the goalkeeper. “ I think our biggest thing is going to be improving the length of spells and turning those 30 or 40 minutes of playing well in a game to 90 minutes,”

Surprisingly, the Whitecaps had an xG of 1.11 in the match.

The Whitecaps are off next weekend as the international break for World Cup qualifiers comes back. They will play Sporting Kansas City at BC Place on April 2.