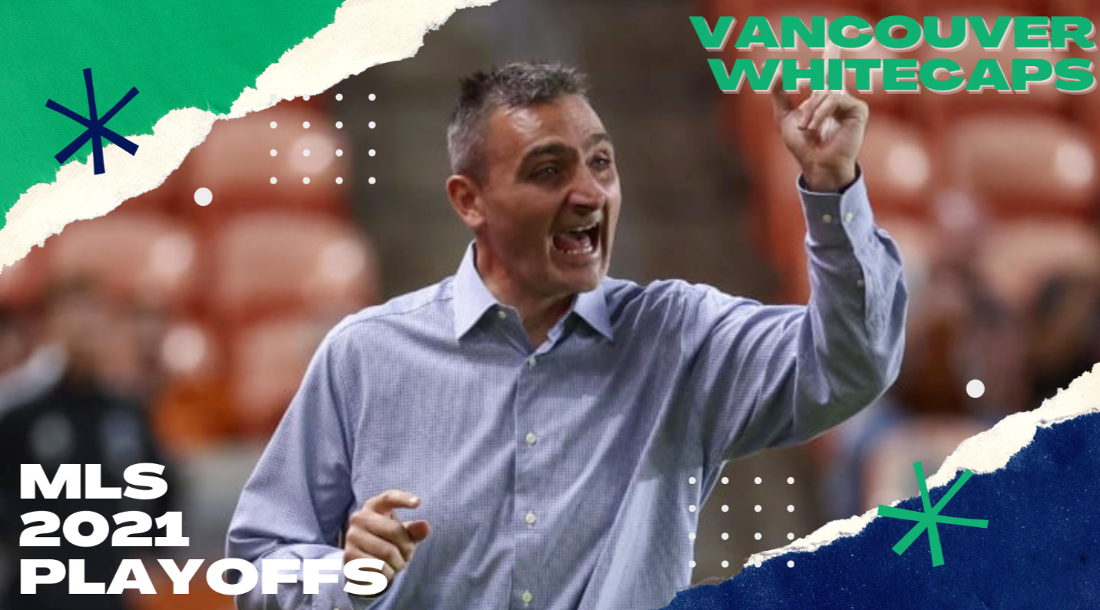 It didn’t look possible in August but here we are. The Vancouver Whitecaps are in the MLS Cup Playoffs for the first time in 2017.

That year the Whitecaps knocked off the San Jose Earthquakes in the first round (that was back when the playoff games had two legs played.) before falling to the rival Seattle Sounders.

This year, the Whitecaps’ opponent is Sporting Kansas City. Vancouver will travel to Kansas City for the first round matchup which is on Saturday, November 20, and kick-off is at 2 PM Pacific Time. They will be traveling to Kansas City, Kansas not Kansas City, Missouri.

How the Whitecaps got to the Playoffs

The Whitecaps finished the 2021 MLS season sixth in the Western Conference with a 12-13-9 record and 49 points.

It wasn’t an easy start to the season for Vancouver. Due to COVID Restrictions, the team wasn’t allowed to play their home matches at BC Place. Instead, they had to play in Salt Lake City.

The team struggled. They were giving up plenty of goals and were struggling to score and looked lost all around. After a loss to the CPL’s Pacific FC in the Canadian Championship, Axel Schuster and company decided to fire head coach Marc Dos Santos and bring in the club’s Director of Methodology and Under-23 head coach Vanni Sartini as the interim head coach.

That turned out to be a very good decision. Sartini has made the Whitecaps go from dull football to exciting, free-flowing football. The team has been playing with more energy and has adjusted to their opponent’s tactics.

White who was traded for cash from the New York Red Bulls, led the Whitecaps in goals with 12. Ryan Gauld has been the playmaker the Whitecaps have needed for years. He has been great at set-pieces, scored goals, and provided assists. Gauld has been nominated for MLS newcomer of the year. He was signed from SC Farense of Liga Portugal 2.

Jungwirth has been a nice addition to the backline and has made smart and simple defensive plays and added personality to the locker room. He was traded from the San Jose Earthquakes for cash.

Of course, we can’t talk about Maxime Crépeau. The Greenfield Park, Quebec native has saved the Whitecaps numerous times and has rightfully been named the Whitecaps MVP.

Cristian Dájome has also been a good playmaker and Jake Nerwinksi has improved his defensive game despite playing on the left side.

The Whitecaps got 26 points in the final 14 games of the regular season and lost twice. Those losses came at the hands of the Portland Timbers and Seattle Sounders. Playing in front of the fans at BC Place also helped.

Sporting KC finished third in the Western Conference but they could have finished first.

In a tight Western Conference, Kansas City finished with 58 points and a 17-7-10. That was two points behind Seattle in 2nd and three points behind the Colorado Rapids in first.

Sporting KC was one of the best teams in the West despite going 6-5 in their last 11 matches.

They beat Vancouver 3-0 back in May at Children’s Mercy Park but lost in Canada 2-1 in October. It’s hard to believe both games took place in the same season.

Daniel Salloli is an MVP candidate and he led KC in goals with 16 and shared the team lead in assists with eight.

In the game in Vancouver back in October, they started slow but made it close and fought to tie the game but the Whitecaps managed to hang on. Expect more of the same if Vancouver takes the lead on Saturday.

Sporting KC has been dealing with the injury bug. Johnny Russell, Alan Pulido, and Gadi Kana did not play in their last game of the regular season due to injuries. They are key players for them. Pulido is back in training after having knee surgery last month but is questionable. He scored twice in the 3-0 win over the Whitecaps back in May.

How the Whitecaps can Win

The Whitecaps are going to have to come out of the gate strong and continue it for a full 90 minutes.

They need to continue the good things they have been doing under Sartini and amplify them to 100. They need to create space for White to get open for goals. They need to be quick on the counter and every player needs to step up.

They are going to need Crépeau to continue his form and for Gauld and Dájome to use their vision to create plays and make smart passes. The defenders can’t be too rough on the tackles and must make simple and effective plays. Midfielders like Russell Teibert have to be responsible for stopping KC’s counterattack and forward passes and starting the attack themselves.

Vanni Sartini said they will beat Sporting Kansas City after the draw against Seattle and they will if they do amplify their game to 100.

Then hopefully, Stand by Me will be played all over Vancouver.