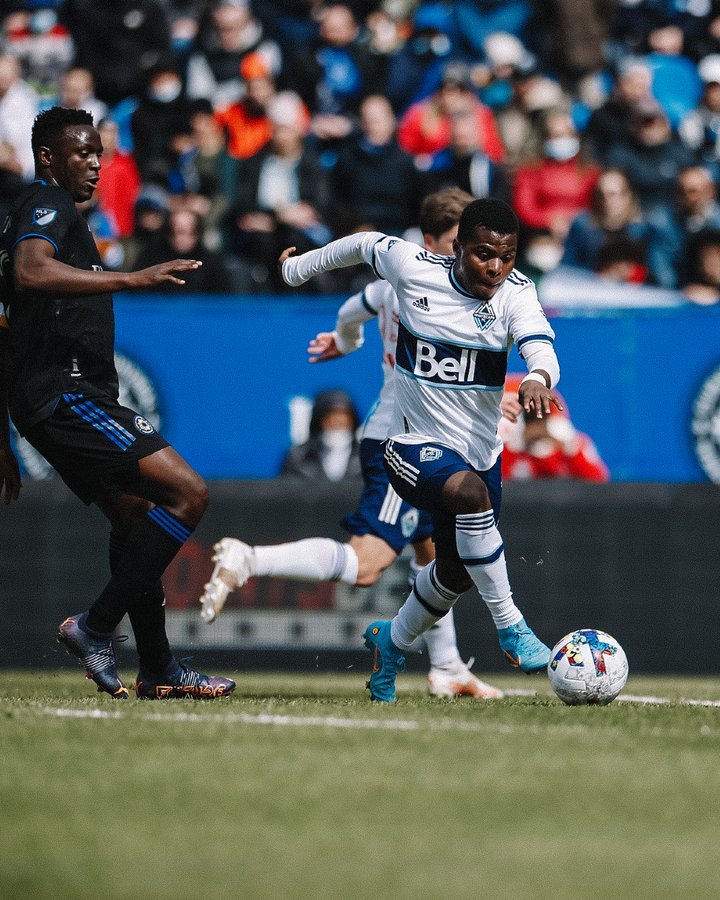 It was another game and another loss for the Vancouver Whitecaps, who have just one win in the first seven matches. Vanni Sartini continued to tinker with the lineup, trying to find that magic combination of players and tactics.

But the intensity was lacking for the first hour of the match. The ‘Caps fought back, but it was too little, too late.

It’s a changed lineup on the back line for the Whitecaps. Cristián Gutiérrez and Florian Jungwirth found themselves back on the bench to make way for Jake Nerwinski and Tristan Blackmon in the side centreback roles.

Blackmon has been a very good pickup for the Whitecaps since joining from LAFC in the offseason. Concussion protocol had kept him out of the starting lineup, but he looks back to full fitness.

Club resident Swiss army knife Cristian Dájome slotted in at left wingback for this match. His versatility has become something of a saving grace for Sartini, letting him play the Columbian in a variety of positions already in this short season. Dájome signed a contract extension through 2024 with an option for 2025 this past week.

Javain Brown was also favoured over Ryan Raposo against CF Montreal. Right wingback is a position with depth for the ‘Caps, so it’s understandable Sartini will give both young players minutes throughout the season.

It was interesting to see Lucas Cavallini only on the bench. He did not start last week due to an illness, but we had been told that it was already cleared up by the next day.

Déiber Caicedo took the position up top alongside Brian White, with Ryan Gauld playing in the no. 10 spot.

On paper, this is a side chosen for pace along the flanks. Both Dájome and Brown have the ability to get up and down the pitch byline-to-byline, and Nerwinski and Blackmon have the defensive mindset to cover their respective wingbacks when they do get high up the pitch.

However, after the team’s defensive errors last week against Portland, they will have wanted to ensure stability at the back to go along with their offensive contribution.

It was not the start the Whitecaps wanted. Right on the stroke of the first minute. Alistair Johnston of CF Montreal lobbed a ball over the Whitecap backline to Djordje Mihailovic, who easily put it behind Thomas Hasal.

That had Vancouver playing from behind right from the beginning. It’s difficult to know how they would have played with an equal scoreline because we never really saw it.

What we did see is a Whitecaps team playing with 7-8 men in their own box when defending. This left no one open to pass to when possession was won.

But it was not all bad. The Whitecaps led the half in crosses with 11 to Montreal’s 4. Unfortunately, there was only one striker in the box to receive.

Sartini has talked in the past about wanting supporting attacking play. Having the second striker or attacking midfielder coming in higher up as well as the opposite side wingback is what he wants.

The Whitecaps were also caught stationary at times. A hesitation from Nerwinski led to a good chance from Montreal late in the half. Thankfully, the ever-present Blackmon came across to protect his teammate.

Sartini will be worried about losing Gauld just before the end of the half as well. The Scottish midfielder went off in concussion protocol after a strong challenge from Johnston.

Gauld’s head bounced hard off the grass. He tried to keep playing, but did go down a couple minutes later to be subbed off.

Pedro Vite came in to replace the injured Gauld.

CF Montreal maintained their early lead going into the dressing room at the half. It left a lot of work for the Whitecaps to try and find the intensity constantly demanded from Sartini.

Lucas Cavallini came on to start the second half. But again, the Whitecaps started poorly, allowing another early goal.

This time, Mihailovic nabbed the assist, crossing in from the right to an open Romell Quioto.

It left the ‘Caps with a difficult hole from which to climb out.

Just before the hour mark, Sartini decided to change his personnel, going for a more attack-minded squad. Michael Baldisimo came on to replace Berhalter while Raposo came on for Brown.

It paid off. The intensity grew out of the extra attacker and crosses started to find their intended targets.

Cavallini scored in the 62’, but it was marked off to offsite. But the ‘Caps did not stop there.

In the 65’, White got his first of the season. Cavallini missed an overhead kick in the box, but the ball ended up on the feet of his strike partner. White shot low, giving the Whitecaps a much-needed jolt.

The Cavallini-White pairing at the top truly gave the attack life. The two strikers played well off one another, and they warrant a full 90 minutes together.

The Whitecaps continued to press higher up the pitch. Tosaint Ricketts came on for Veselinovic as Sartini felt another goal was possible.

He was not wrong. Ricketts scored in the dying minutes of stoppage time, converting a beautiful cross from Teibert.

But, as their luck would have it, the goal was ruled offside after a check by VAR.

With no time left on the clock, play dissolved into a pushing match, with Cavallini and Wanyama taking centre stage.

It is easily apparent that the intensity is there for the ‘Caps, but it often only surfaces during spells of adversity.

It needs to be present from the get go.

Sartini was understandably angry after the match.

“We are the Vancouver Whitecaps,” he said. “We cannot afford to give chunks of games or to sleep at the beginning or both halves.”

The coach said his side is too shy away from home. He said they wait for teams to come to them rather than getting on the front foot and attacking first.

“Today, we weren’t up to the challenge for the first 30 minutes,” he said. “Even if they [Montreal] didn’t have great chances, they were deserving to be up 1-0 because we weren’t playing. We need to play 90 minutes. If we play 60 or 50 or 45 minutes, we’re not going to win games. If we play 90 minutes, we can beat every team in the league. Everyone.”

“You want to set the tone,” he said. “ You want to come out strong, and you kind of get punched in the face like that twice to start the game and in the second half, it’s something we need to look at because that can’t happen.”

Nerwinski concurred that giving up goals so early in both halves was unacceptable.

“If I’m going to be honest with myself, it wasn’t good enough from our club,” he said.

The Whitecaps have the worst point total (4) and worst goal difference (-8) after the first 7 matches in the club’s history.

The ‘Caps continue their road trip in Texas to play Austin FC next Saturday. Kickoff is at 5:30 p.m. Pacific.