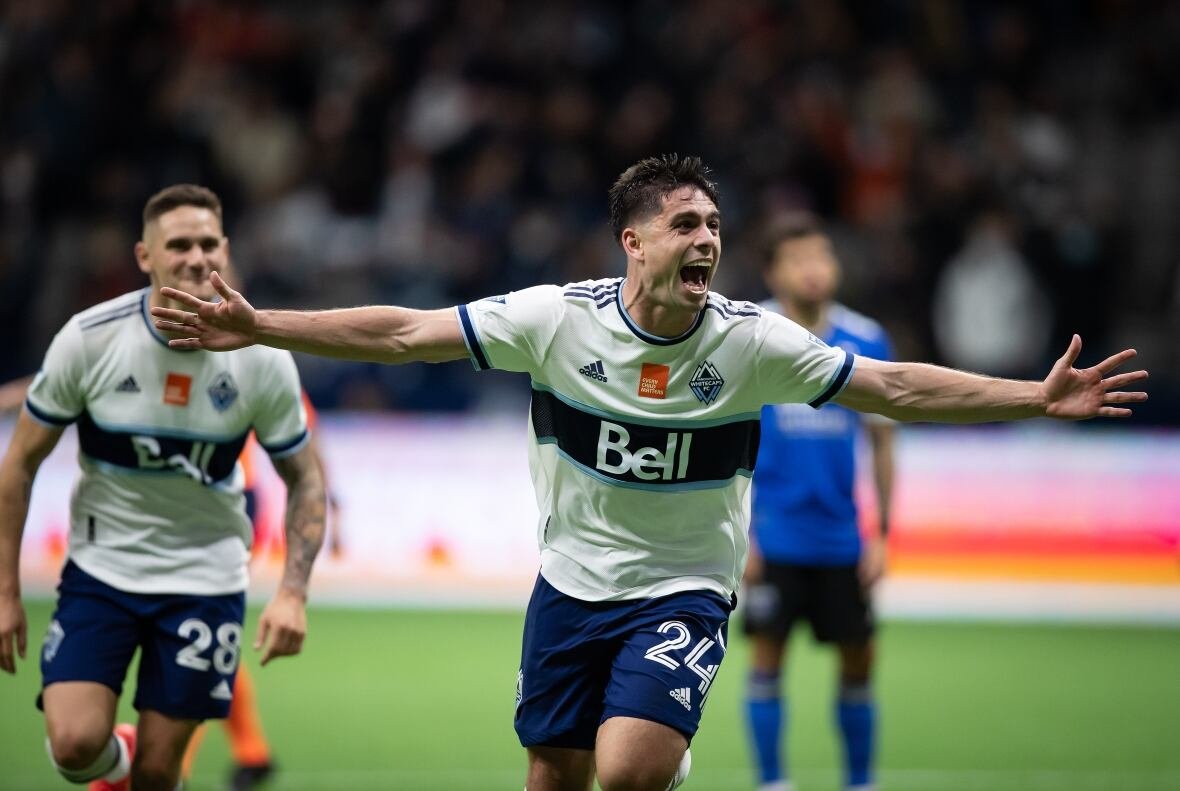 Photo Credit: CBC per Darryl Dyck of The Canadian Press)

No one in sports likes to lose and players and coaches do whatever it takes to win.

There was a lot of frustration and disappointment after a 3-0 loss in Austin on April 23. That led to the players and coaching staff working hard and making adjustments during the week off.

So far, it has kind of paid off. The Whitecaps are coming off two big victories. The first was in MLS action against Toronto FC which saw Tosaint Ricketts score a late winner. The second was last Wednesday in the Preliminary Round of the Canadian Championship against Valour FC. Team captain Russell Teibert and Ryan Raposo scored the goals in a game where Vancouver dominated the first half.

The busy month of May continues for the Whitecaps as the San Jose Earthquakes come to town.

Like Vancouver, San Jose has struggled out of the gate. They are 2-3-6 with 9 points just two above the Whitecaps. The Earthquakes have given up 16 goals which are the most in the MLS. Earlier this year they fired Matias Almeyda and brought in Earthquakes II coach Alex Covelo as the interim.

For the Whitecaps, they will be without Ricketts and Ryan Gauld as Har Journalist reported that both of them are in the Health and Safety protocol. I assume that is another way of saying the COVID-19 protocol and hopefully that isn’t the case. If it is, let’s hope they get well soon.

Sartini spoke about Saturday’s match on Friday afternoon. He shared that he knows Covelo going back to his time in Italy.

“I know I know the coach very well we did a course together in Italy because it’s Spanish but it is a location in Italy,” said Sartini. “ They play with more structure than they were playing before more or less frantic, less aggressive but did they defend with a more of a classic structure and they’re a good team.”

The Whitecaps and Earthquakes both come into Saturday with not a lot of rest. Of course, Vancouver had their Canadian Championship game with Valour Wednesday and San Jose beat the Seattle Sounders on penalties in the US Open Cup round of 32 on Wednesday.

I think it went well, in the sense of how much can be prepared again with only two training sessions actually,” said Sartini on Thursday and Friday’s training sessions. It’s one and a half because yesterday, there was a recovery session. Today, the guys actually looked a little tired but hopefully, they will recover all the energy for the game on Saturday. We’ll be ready to try to continue this winning streak so yeah, it’s gonna be very hard but even then they played on Wednesday, in the cup they even went on extra time, so there’s no advantage or disadvantage.”

Despite that, the Whitecaps look to get into high gear early and hope to keep the foot on the gas all game.

“ I hope that we’re going to be up to zero at the end of the first half,” said Sartini. “ But in any case, I know we worked a lot and been intense. And again, it’s okay to take a pause for five minutes if we want to manage the tempo of the game. But we need to go 100 miles per hour and tomorrow hopefully is a step in the right direction.”

This will be a battle of two sides trying to find momentum and the question is who wants it more? It will be up to Lucas Cavallini and the Whitecaps to prove that.