Whitecaps get yet another late win against RSL 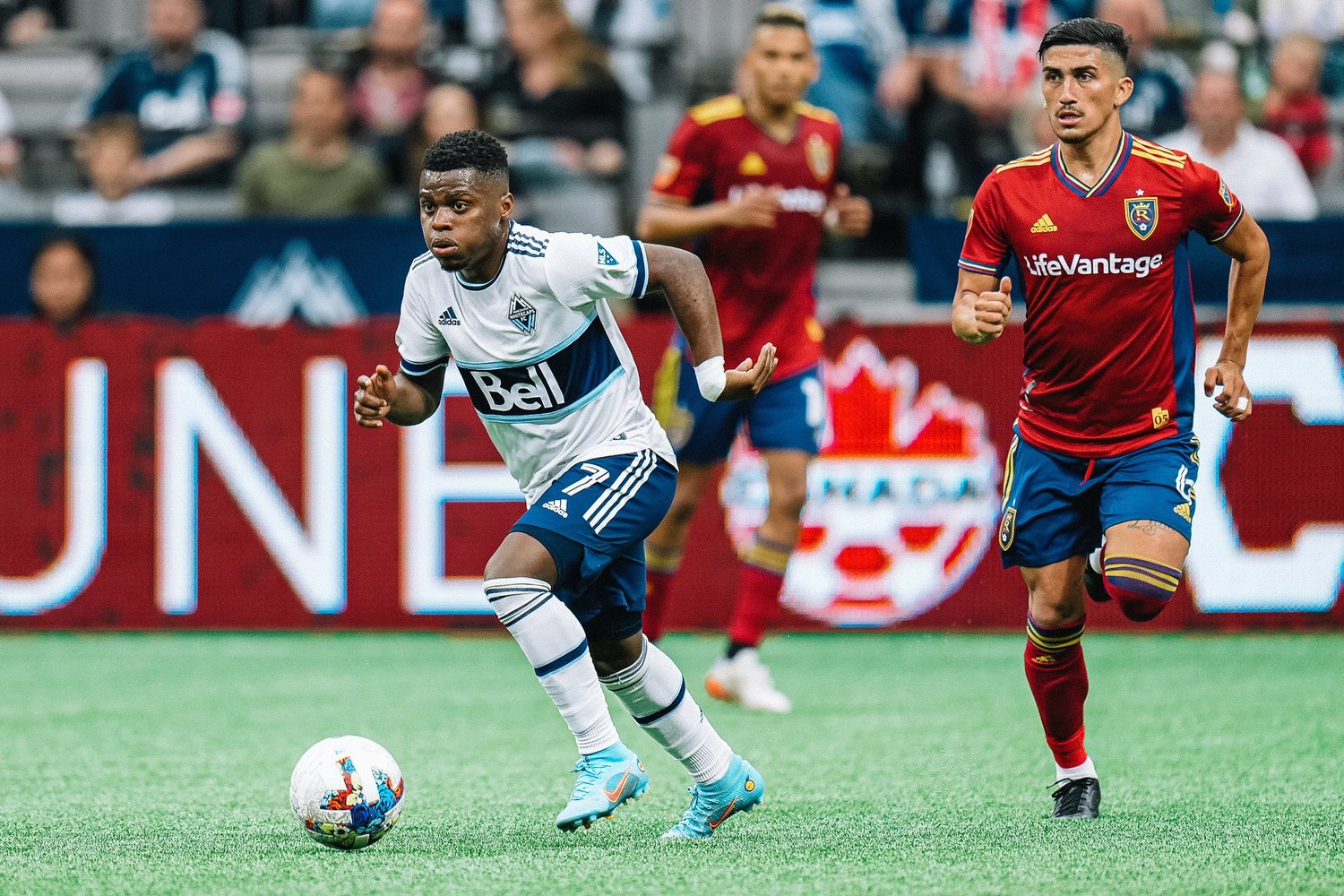 The Vancouver Whitecaps looked to keep their May momentum going in June.

Real Salt Lake came to town and prior to kickoff, they were second in the Western Conferece. It was going to be another tough test for the Whitecaps.

Head coach Vanni Sartini decided to keep the 3-5-2 formation from the win over Sporting Kansas City.

Florian Jungwirth was back in his favourite position as the holdong defensive midfielder. It is a position he played in Germany and with the San Jose Earthquakes.

Leonard Owusu was making a rare start start with Sebastian Berhalter along side him. The graphic above says they will be higher up which is true but they are likely gonna drop down joining Jungwirth at some point in the match.

Brian White was back from Health and Safety protocol and was starting up front alongside Deiber Caicedo. Ryan Gauld was dealing with a hamstring problem and was on the bench. Caio Alexandre has had really bad luck with injuries over the last few years and it was good to see him on the bench.

Sartini has spoke about how Pedro Vite has the tools to be a great MLS player but he lacks the intensity. He was on the bench yet again and I for one would like to see him start sooner or later.

There is no number 10 which makes the attack kind of lack and the midfield is very defensive. Ryan Raposo and Cristián Gutiérrez on the flanks will be relied upon for offence heavily.

Overall, I’m fine with lineup. The formation worked last week and why not try it again this week? Plus, they also want to see how it would work when Andres Cubas arrives after the international break.

Jungwirth was getting involved early. He won a foul and made a good steal which led to a Berhalter header on former Whitecaps goalkeeper Zac MacMeth. (His last name sounds like a very bad MacBeth parody or a very bad Breaking Bad sequel.)

The Whitecaps started well early. For the first ten minutes, they were trying to get more chances and winning corners. They were also getting the ball back with ease.

Owusu was making the most out of his start. He displayed good pace and was constantly challening the ball carrier.

15 minutes into the match and Real Salt Lake started to wake up as they were basically playing keep away against the Whitecaps. Salt Lake just kept passing the ball around and weren’t finding the right oppurtunity to test Cody Cropper.

They got one chance when Bobby Wood’s close range chance sailed over the bar in the 25th minute.

In the 31st minute, the Whitecaps got the breakthrough. Jake Nerwenski’s big toss on a throw in went off Jungwirth and Ranko Veseinovic got a touch on the loose ball. It was good to see the Whitecaps get a goal from someone who rarely gets on the scoresheet. It was Veselinovic’s second career MLS goal and the first was one he scored was on August 8, 2021 against the LA Galaxy..

Ryan Raposo displayed some speed. When he turns on the jets, he does look pretty fast. He was also dropping back and making sure to get the ball up the pitch. It’s not often he does that.

The 3-5-2 seems to be working so far. With the congested midfield, they are pressuring Real Salt Lake making it difficult for them to get in the box and the final third. It was good to see them be up 1-0 after all that pressure.

The second half started with Berhalter leading a counter attack. He gave the ball to Caicedo who was sprinting with fury but he couldn’t find anyone to pass to.

In the 51st minute, Cropper faced his first shot on target. It was a tough one from Wood and somehow Cropper kept it out. But not long after that, it was a tie game as Justin Meram received a long ball and beat Cropper.

Real Salt Lake continued to control the game with their possession

Cropper continued to showcase his abilities as he made one good save on Sergio Cordova but he amazingly stopped the rebound. That MLS experience showed and Cropper has been a solid backup for Thomas Hasal.

Gauld came on for Berhalter in the 63rd minute and not even a minute in you can see his creativity and passing abilities shine.

Alexandre did come on along with Tosaint Ricketts. It was his first time playing at BC Place and it was also the first time Luis Martins at BC Place too. It was good to see Alexandre play football again after almost a year of injury troubles.

Not a lot was happening after that except RSL was starting to look very dangerous. They continued to move the ball quickly but had trouble hitting the net. The Whitecaps had a couple of runs in the box but again, nothing to show for it.

In the 80th minute, Cropper and the defenders were caught in a crazy scramble but Salt Lake hit the post as it took a deflection off Erik Godoy.

Martins showed off his strenght which was passing. He gave it to Gauld who’s cross found Marcus Godinho but his header was stopped by MacMeth.

Soon after, White made a nice through ball to Ricketts in the box and it looked like the Whitecaps were up 2-1 but after a quick VAR check, Ricketts was offside. Tough break for him. First the one in Montreal and now against RSL. That is a shame because the passing on the build up was so nice.

The Whitecaps were pushing late. They were making quick passes around the box and crosses.

Martins was tackled harshly in the box which led to Aaron Herrera getting a red card and a penalty for the Caps. Gauld stepped up and made no mistake for his second goal of the season.

With that, the Whitecaps secured the three points.

Sartini didn’t believe the Whitecaps deserved to win but loved their drive to win.

“Let’s be honest, we didn’t deserve to win…but it’s a testament of will in the group.”

The Whitecaps will have some time off and Sartini believes their energy and drive will continue after the break.

“We are one point behind the playoffs and we will have that hunger when we go to Seattle,” he said.

I asked him about Alexandre’s return to the lineup and how he has been preparing.

“Caio is one of the most energetic people I have met in my life,” said Sartini. “He was pumped last week just to make the trip to Charlotte…He will play tomorrow for WFC 2.”

Vesilinovic was happy to score a goal.

He also spoke about his goalkeeper.

“He was unbelievable,” said Vesilinovic

Cropper talked about his saves and in particular, the stop on Cordova’s header.

He was happy that saves like that could help the team. Without it, the momentum would go the other way.

The goalkeeper also talked about

The Whitecaps and Real Salt Lake matchup is the longest in MLS without a draw. It stands at 18 matches: 11 wins for Vancouver and seven wins for Salt Lake.

The second longest? Vancouver and Portland.

I don’t know what it is, but Whitecaps games against RSL and Portland are fun. I’m not complaining though.

As mentioned, the Whitecaps have some time off and they play in Seattle on June 14. That’s a Tuesday and kickoff is at 7:30 p.m.