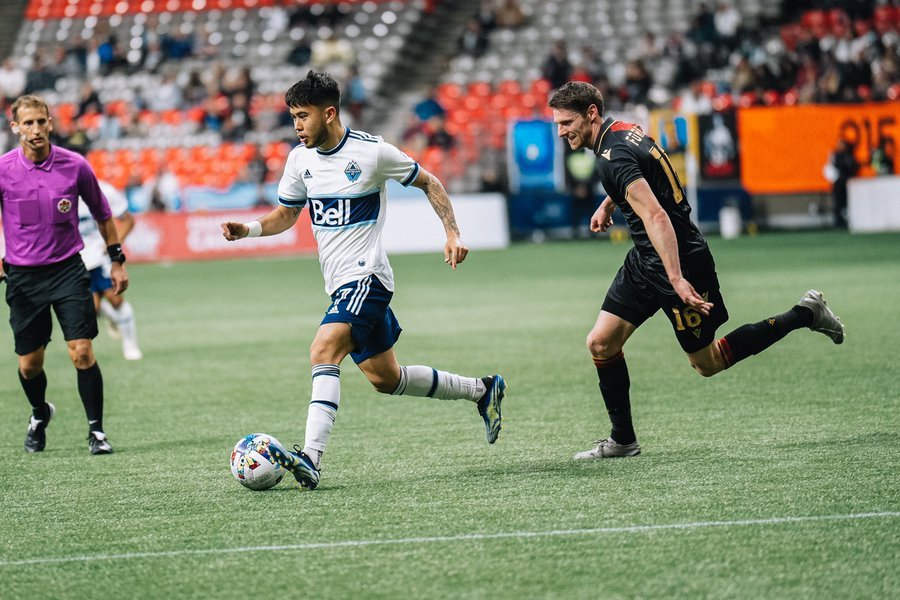 The Vancouver Whitecaps came into their first Canadian Championship match with a mandate: to win against a CPL side.

It was the ‘fourth time lucky’ for the ‘Caps, who finally sealed the deal and managed to progress in a tournament where wins have eluded them for the past few years.

Six changes have been made to the starting XI that played last Sunday against Toronto FC. But given the lineup for tonight, it’s a strong showing by Sartini.

The Back 4 has a couple changes. Florian Jungwirth was paired with Ranko Veselinovic, giving Erik Godoy A rest. Godoy was not even on the bench for this match. However, it’s likely this is to do with recovering from his previous injury, which had kept him out of the lineup for the season so far.

Marcus Godinho also started at right back in place of Javain Brown. This marks Godinho’s third start this season.

Russell Teibert kept his spot in the middle of the park. Alongside him was Michael Baldisimo, which was his second start of the season.

Cristian Dajome and Brian White both took seats on the bench to make room for Ryan Raposo and Deiber Caicedo.

Finally, Cody Cropper will be the starting goalkeeper for the foreseeable future as Thomas Hasal took a middle finger injury to his left hand in the Toronto match. He will be out for approximately six weeks.

It was a competent lineup from Sartini, only capable of securing a win. But in true Sartini fashion, he also stuck to his philosophy of constantly changing the starting XI.

Both Baldisimo and Godinho were being given chances to show why they should be considered for more matches.

Godinho is in a position to put pressure on Brown on the right. But Baldisimo’s path to a secure starting XI is more difficult given that Andres Cubas will be top pick when he arrives.

The Whitecaps came into this match without ever winning against a CPL club, but still with all the pressure. On paper, they are the better team: more resources, higher-paid players.

In the first half, Sartini’s boys showed their ability. It was a calm effort, which left them 2-0 up after 45’.

Raposo started strong in the left wing position. Valour often left him unmarked, which gave him plenty of space to run down the line.

In the 6’, the ‘Caps had a handball appeal, but it was brushed off by referee Alain Ruch. It was a difficult call to make, and could have gone either way.

Early action was fairly even, but as the match evolved, the Blue-and-White started to dictate the play.

In the 19’, it paid off. Raposo took a hard shot from about 10 yards out, which was saved. However, Valour FC goalkeeper Rayane Yesli was unable to hold onto the ball.

Teibert pounced on the open ball for his first goal of the Canadian Championship, giving the ‘Caps the 1-0 lead.

They doubled their tally four minutes later in the 23’ as Caicedo crossed the ball from the right to a wide open Raposo. It was the winger’s second goal of the year, and his second in the Canadian Championship in his career.

The rest of the half saw the Whitecaps with the bulk of control. Chances for Valour were few and far between. The Winnipeg side had four shots, two on net. But none threatened to get past Cropper.

For the ‘Caps, they finished the half with 11 shots, with 6 of them on net.

There was concern for Baldisimo, who unfortunately, went off injured in the 34’. Sebastian  Berhalter deputized for the injured midfielder, sliding alongside Teibert.

A 2-0 lead going into the break was a welcome position for the Whitecaps and one that would have been unaccustomed to this season.

The job now was to ensure they could hold onto what they had done so far.

The ‘Caps continued to control the match, but it became a settled affair. Not much was offered from either side in the first 15 minutes.

At the hour mark, both coaches tried to inject some fight into their sides, but multiple subs came on.

Cavallini gave what may be the most fury in the second half, grabbing his token yellow card for unsportsmanlike play in kicking the ball away in what was a Valour free kick.

Pedro Vite, who came on as part of the multi-switch at the hour, played a nice chip pass over the Valour defensive line to Gauld. The Scotsman crossed it over to White, but it was too high for him to handle. That summed up the majority of play in the second half, but it was for the win.

Vancouver came away with the win, a ‘monkey off their back’ in finally beating a CPL club. Achievement unlocked. *Cue Xbox sound effect.*

Sartini came into the press conference after the match, all smiles.

“I think we played a good first half,” the head coach said. “We showed we are the higher level team. We were too relaxed in the second half…but I’m happy because we were good in the first half.”

He mentioned several key players in the win, but reserved some special admiration for Raposo, who had the second goal.

“Ryan is a fighter…at the beginning of the season he saw himself down in the depth chart and learned a new position, but he needs to improve defensively. And I’m happy that he scored,” Sartini said.

For his part, Raposo was already looking ahead to Cavalry FC.

“It’s gonna be a scrappy game…I’m confident in the team. We are confident in each other. We are going there and will get the job done,” the winger said

It was a foul-laced affair. Valour FC had 19 to their name, while the ‘Caps had 13. Yet, this resulted in only three yellow cards, with two going to Vancouver.

The Whitecaps face the San Jose Earthquakes in a Western Conference match as they hope to continue to close the gap for the final playoff spot.