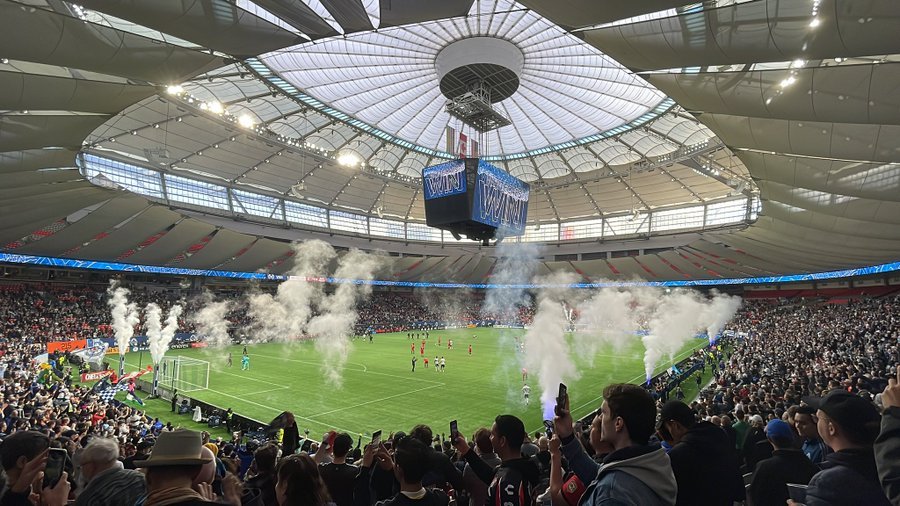 After a week off, the Vancouver Whitecaps were looking to prove that their rest paid off as Toronto FC comes to town for an all-Canadian matchup. TFC has been on a bit of a slide and the Whitecaps have been on a bigger slide. They were looking for only their second win of the season and hoping to climb out of the MLS basement.

Well, would you look at that? The Whitecaps are going with four at the back!

Vanni Sartini has teased the back four in his weekly Zoom presser with the media. He spoke about tinkering and a chance for all sorts of lineup changes. Well, a 4-2-2-2 formation was the big change.

Erik Godoy has spent time with Whitecaps FC 2 as he recovered from left calf tightness. He was back in the lineup for the first team. Javain Brown has struggled at right wing-back and he was put back at right-back which is his natural position.

Russell Teibert and Sebastian Berhalter are the two holding midfielders which allow Ryan Gauld and Cristian Dájome to be higher up the pitch. Brian White and Deiber Caicedo lead the attack.

This was not the formation I was expecting but it was good to see changes because what was working before wasn’t working. There was the hope the Whitecaps would look more organized defensively and be quicker with the attack.

As for Toronto FC, they apparently had seven academy graduates in their starting XI as they played Wednesday night in a 2-1 loss to FC Cincinnati.

The game kicked off with Toronto FC having the majority of the possession.

Early in the game, Toronto looked passive with possession. They were passing the ball backwards and sideways a lot and the Whitecaps did a good job of stopping them from getting good chances. Lucas Pestrasso made a good run from his own half but Jake Nerwinski prevented him from getting a good shot off.

Early for the Whitecaps, there were a few giveaways but throughout the half, they looked threatening on the counter. Gauld was the engine of the attack and he drew some fouls and looked quick on the counter making some good deliveries.

Dájome as a winger/attacking midfielder is much better. He doesn’t have to worry about defending so much and staying back. Instead, he can use his creativity to make good runs, pass the ball and cross the ball. He was making some good interceptions and made some good passes in the box which included Caicedo being stopped by Alex Bono.

Speaking of Caicedo, he was looking for a goal. He was hanging around the box looking for a Gauld or Dájome cross and had a few good chances.

The Whitecaps defending looked better with the back four as they were blocking and clearing the ball with ease. They along with Berhalter and Teibert in the midfield did a good job of stealing the ball while Toronto was on the rush.

While Vancouver’s attack looked good, Toronto FC almost was 1-0 after a VAR check that saw a clear handball from Ranko Vesilinovic in the box. However, Thomas Hasal stopped Alejandro Pozuelo’s penalty (It wasn’t a good one, to begin with.)

The first half saw the Whitecaps get better chances than Toronto FC but they just needed a way to beat Bono. Toronto had shots go wide from Deandre Kerr and Michael Bradley.

It was the best their attack looked all season and it looked like the back four was working so far.

The Whitecaps came out in the second half with plenty of chances.

They were fast on the counters and Gauld was making some good long balls. But they weren’t getting a lot of heads on the crosses and they couldn’t pounce on the loose balls. They gave the feeling that a goal was coming.

White headed two great chances with his head but one missed the net and the other was stopped by Bono. Brown was making lots of those crosses and he was crossing a lot of them before any Whitecaps player was in the box.

Toronto FC was coming in bunches too but Hasal was great in goal. Hasal made two good saves in the 71st minutes but Jayden Nelson scored on the third chance… or so he thought.

The goal was ruled off because Hasal hurt his hand. However, there was no contact from Nelson on Hasal. That looked like a good goal to me. They also didn’t check with VAR. If it is there, why not use it?

As a result, Cody Cropper, who also had some playing time with Whitecaps FC 2 was brought into the game. He made an impact instantly with a great finger-tip save. Hasal went down the tunnel with what looked like an ice pack on his hand as he came off.

Ryan Raposo and Lucas Cavallini also were brought in. Cavallini got a yellow card almost as soon as he came on. Congrats to those who bet money on that. That also has to be the quickest he has gotten a yellow after coming on as a sub.

Other than getting booked, Cavallini looked good. He was making solid runs and was using his strength to get around defenders.

Around the 87th minute, Gauld continued to be the engine of the attack as he made a nice long ball to Cavallini who found an open Tosaint Ricketts for the tap-in. It looked like Ricketts was a tad offside like he was in Montreal. The TFC players protested but the goal stood. Again, if VAR is there why not use it?

Nonetheless, the Whitecaps gave a solid performance with some VAR (or lack thereof) luck. This is the type of win that can turn around a season and the Whitecaps will look to build on this.

Sartini didn’t have much of an update on Hasal.

“He has a splinter on his hand,” the Whitecaps head coach said. I should clarify he meant to say he had a splint on his hand. (Sartini didn’t know what to call it.)

Sartini was pleased with the performance of the bench.

“I’m very happy that the protagonists of the win were the guys coming off the bench,” he said. “It shows the group is the leader.”

Sartini also had some high praise for Gauld when I asked him about his performance.

“Ryan Gauld is our best player, it’s simple,” he said.

This was the first of four straight home games and the head coach spoke about the importance of playing and winning at home.

The Whitecaps trained hard during their two weeks off and it was like a second training camp for them.

“The three points show how important it is,” said Jake Nerwinski on the time off and the win. “We trained really hard it was like a preseason.”

Ricketts wasn’t fazed by the pressure heading into the match.

“Pressure isn’t a bad thing, sometimes your backs have to be against the wall,” he said.

The expected goals were close. They were 1.8 to 1.3 in favour of Vancouver.