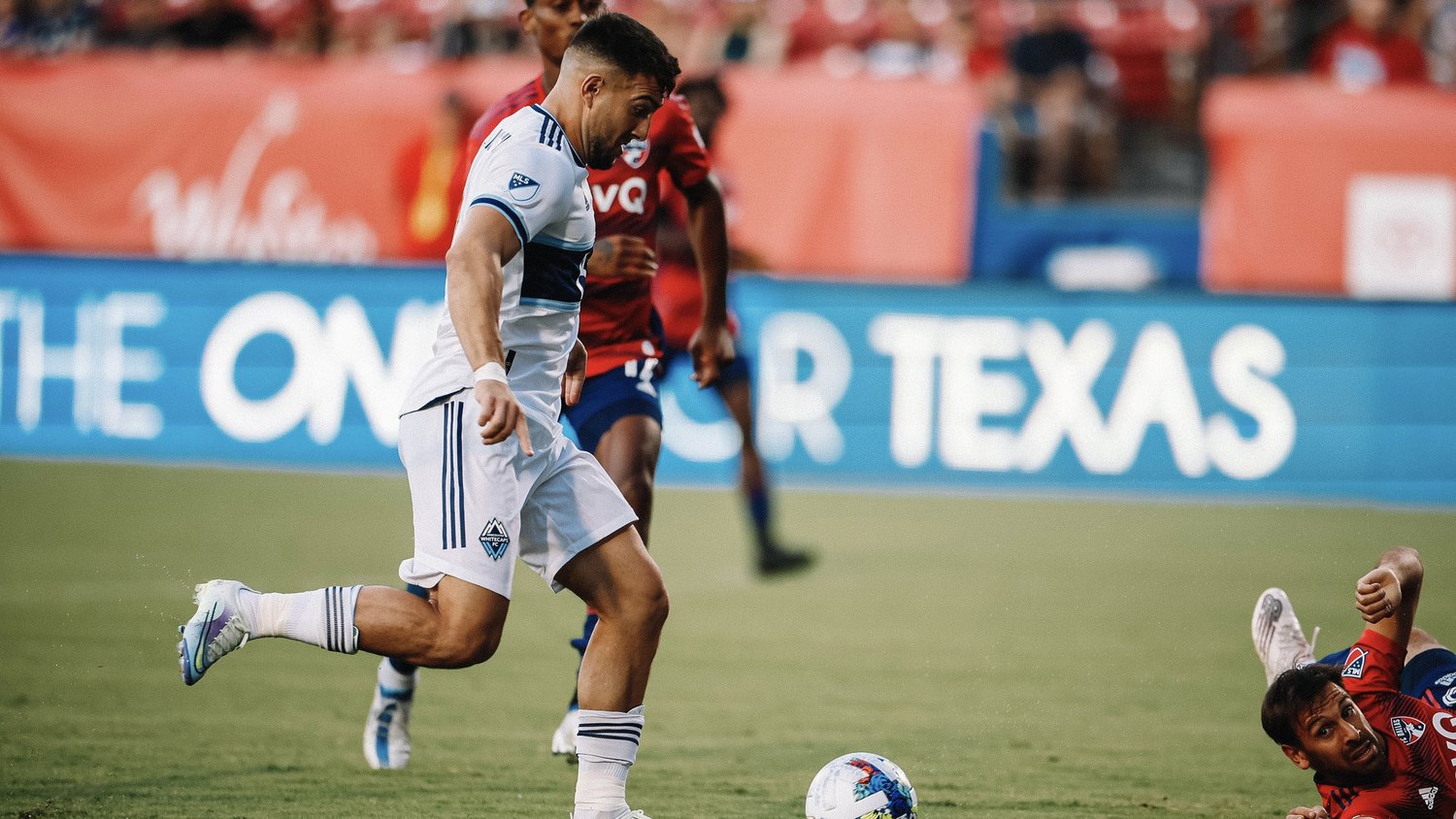 The Vancouver Whitecaps looked to put a disastrous result in Seattle behind them as they made the trip to Dallas. The Whitecaps beat FC Dallas on May 18 at BC Place. Lucas Cavallini scored a late penalty.

Vancouver looked to do the double over Dallas but it would be a tough ask as Dallas was still second in the Western Conference and the road has not been kind to the Whitecaps this season.

Vanni Sartini went back to the 3-4-2-1 formation after going with the 3-5-2 formation in the last few games.

Brian White and Ryan Gauld start the game on the bench. Gauld probably should have started but one or both of them could come off the bench. The two Colombians, Deiber Caicedo and Cristian Dájome were the two attacking midfielders.

Lucas Cavallini was back from international duty and he got the start. The Whitecaps have missed his strength and it would be interesting to see if he can continue his good form. Javain Brown was also back from international duty with Jamaica and he was back in the right centre-back position. Brown has steadily improved and having him as an RCB instead of a right-wing back might have helped.

Tristan Blackmon made his first start in a while after recovering from a knee injury. His defensive presence was sorely missed. He joined Brown and Ranko Vesilinovic who was making his second straight start.

Andres Cubas was also making his first MLS start and Russell Teibert was back wearing the captain’s armband and got the start after recovering from an eye injury.

It looked like a game where the Whitecaps would rely on their substitutes again. Let’s find out.

Caicedo started the quick counter and Dajome tried to pass to Cavallini who picked up the loose ball and his shot went off Dallas goalie Maarten Paes, the post, the grass and in. That was Cavallini’s fifth of the MLS season and he is Vancouver’s leading scorer. He showed no rust after the international break.

That was the best start the Whitecaps could have after the Seattle game. As for Cavallini, his confidence continued to rise. They took advantage of poor defending from Dallas and made them pay.

After that, there was a careless turnover that almost led to a Dallas counter but they couldn’t handle the ball. The Whitecaps need to be careful when they have the ball because Dallas is one of the best (if not, the best) teams in MLS when it comes to transitions.

Dallas started to control possession around the 11th minute. Ryan Raposo made a good sliding tackle on Ema Twumasi and Cubas made an impact early with a hard tackle that led to a Whitecaps counter. Cubas even tried to go for goal from distance but his shot went off the outside of the post. Imagine that went in. That’s not what he’s known for but it was a good try. It was also great to see Cubas make the smart tackles early. That’s what he’s known for.

Cavallini was starting to make some careless tackles which included him getting an arm on a Dallas player. There was no yellow card but he needs to be careful.

There were some very poor giveaways from the Dallas midfield and Vancouver took advantage, especially Cubas. All they needed to do was get some shots.

Brown was making some good tackles and made a good block on Alan Velasco. He was also quick to make clearances. He also made a good tackle in the Dallas half and tried to score from an angle but it went off the side of the net. It’s good to see him improve throughout the season.

After Facundo Quignon got a yellow card for a hard tackle a few yards outside of the box, Caicedo’s free-kick was an absolute banger as it went over the wall and just past the right post. That was Caicedo’s first goal of the season. What a way to get it.

Caicedo has been kind of disappointing this season compared to last year. Maybe this is the start of the offensive spark coming back for him.

It was safe to say that was an excellent half from the Whitecaps and is definitely their best of the season. Despite Dallas having more possession, Vancouver defended well, made good tackles, looked good on the counter and scored two goals. When the Whitecaps had the ball, they made things happen.

Cubas was making an impact once again by winning a defensive battle early. He was also winning aerial duels. He was just what the doctor ordered. It seemed like he was every day.

It looked like Veseilinovic gave away a penalty after a shove on Franco Jara. But it looked like a dive on the replay.

The Whitecaps continued to defend well and looked quick on the counter.

But after Jake Nerwinski and Florian Jungwirth came on for Tristan Blackmon and Cubas before the 60th minute, Dallas started to click. They started getting plenty of chances. The Whitecaps were all standing in the penalty area and they shouldn’t be doing that. Sitting back is not a good idea. Luckily, Dallas had trouble finishing their chances.

The Whitecaps started to get some pressure in the Dallas penalty area as Caicedo, Cavallini and Raposo led the attack. But they needed more.

There were some turnovers and fouls given up and that let Dallas become more threatening. Luis Martins who came on for Marcus Godinho was getting caught defensively. He was good with the ball but needed to improve his play without it as Dallas was pushing for a goal.

Brown in particular was focused on clearing the ball once Dallas played it in the box.

The Whitecaps needed more offence to close out the game. White and Gauld came on for Caicedo and Dájome. Ideally, Sartini would rest them for Wednesday’s Canadian Championship semi-final but Dallas looked dangerous and one more goal could put them out.

FC Dallas continued the pressure but again they had trouble in the final third. The Whitecaps defenders were losing their man but Vancouver was bending and not breaking.

The Whitecaps picked up the three points and that is big. It was also a great response to their bad effort against the Sounders. They had a great start and defended well.

Sartini was pleased with the win. He was praising the team’s defensive efforts and their start to the game.

“I think out of possession we did a good job, with possession I liked a lot…as a coach, it was beautiful,” said Sartini.

The Whitecaps coach also spoke about the team’s big game against York United on Wednesday. He said a win like this gives the team confidence.

“We are going into that game ready physically and mentally,” he said.

Cubas spoke to the media for the first time as a Whitecap. (Through an interpreter.) He talked about his first-ever MLS start.

“Very good, had a quick taste of the league in Seattle and it was good to come up with the 3 points today,” said Cubas.

He also talked about adapting to the physical style the MLS brings.

“The league is very physical,” he said. “ It’s only my second game, I’ll learn to adapt more…I like to be intense, I like to pressure…I know there is a lot of good teams in this league.”

The Paraguayan international is also looking forward to playing at BC Place.

“I’m excited to play in front of our people at our home stadium,” said Cubas.

Blackmon was very happy to be playing games again and was even happier with the three points.

“It felt great to be out there, it felt like forever, I just missed being out there with the boys,” he said.

Dallas managed to get 16 shots but the Whitecaps managed to keep them to only one on target.

As mentioned the Whitecaps play York United in the semi-finals of the Canadian Championship next week at BC Place. The game is on Wednesday, June 22 and kickoff is at 7:00 p.m.