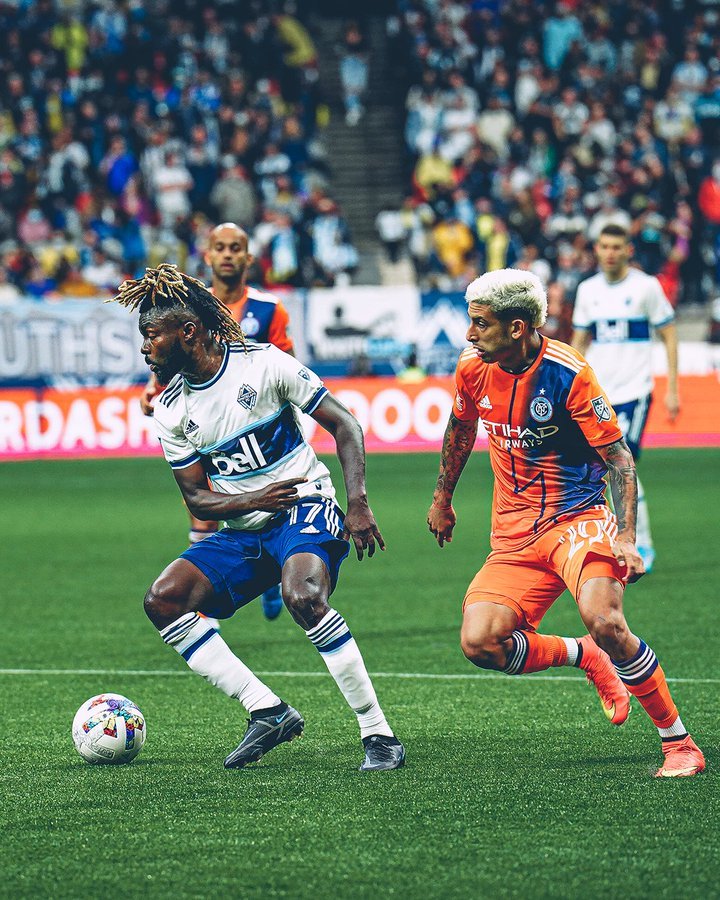 The Vancouver Whitecaps got their first point on the board after drawing with the defending MLS Cup champions, New York City FC.

While not a match to excite the neutrals, the ‘Caps were the only Canadian MLS club to get something out of the day, after both Montreal and Toronto lost their respective matches earlier.

The initial formation put forth by Vanni Sartini suggested a change in play for the Whitecaps from the game against Columbus.

Florian Jungwirth grabbed his first start of the season, replacing Jake Nerwinski, currently serving a one-match suspension, on the left of the back three. Dájome kept his spot on the left wing, but Cristian Gutiérrez stepped up for Javian Brown on the right, an interesting one given his natural left foot and comfort on the other side of the pitch.

Ryan Gauld shifted further up the midfield, leaving Leonard Owusu to come on beside Teibert. The lack of a holding midfielder was an interesting choice by Sartini given how easily Columbus was able to carve through the ‘Caps last Saturday.

Brian White was still hindered by a foot injury, but did make the bench.

Caio Alexandre continued to sit out with his injury issues.

NYCFC came in with a game plan to hold the ball and play to their strengths. But the ‘Caps, a team used to a lack of possession and counterattacking play, knew the drill. The east coast club had little to show for their almost 70 per cent possession.

Much of the time, New York City FC kept trying to force the ball through the middle of the pitch, which was well clogged by the Whitecaps and their three midfielders of Gauld, Teibert and Owusu. However, the pressing game was minimal from the home side, meaning the opposition was able to recover easily and keep trying.

The wingbacks, already mentioned with Gutiérrez and Dájome playing inverted, switched sides a couple times throughout the half. While it did allow for a few early forward passes to the inside and for them to cut in and shoot from the top of the box, it was too little to be effective. Instead, their inverted positions hindered longer runs to the byline. In particular, when Gutiérrez had the ball down the left, he was able to use his speed to get around the fullback and cross from a deeper position, which led to a couple of decent chances, one notably for Dájome.

The Cityzens had the first decent chance, pinging a header off the bar in the 14’. It was the closest either side got to a goal in the half.

Gauld did not see much of the ball in the first 45’. But the few time he did have it at his feet, he made good use of it with his forward-minded passes.

A sticking point occurred when Maxime Chanot fell to a minimal challenge towards the end of the first half. ‘Caps fans let him know of their discontent throughout the rest of the match, booing any time he touched the ball.

Lucas Cavallini continued to show his determination and make the case for why he should be playing. His chance on goal in the 22’ was the best of the half for the home side. He also contributed by dropping keep to help win balls in the midfield and with strong tackles. But in true Cavallini style, it also won him his first yellow card of the season.

Shots were 12-5 in favour of the visitors in the first half. Whitecaps keeper, Thomas Hasal, was forced into a couple good saves from the edge of the box, but nothing he couldn’t handle.

No changes for the Whitecaps as they came back on the pitch for the second half, but there was a greater sense of urgency in their play. NYCFC was no longer allowed to just sit on the ball and dictate the pace of play as the ‘Caps pressed and forced turnovers.

The pairing of Owusu and Teibert in the middle of the pitch was especially important in this regard. While neither player had a stellar performance, they were both effective in their duties, most notably when one challenged, forcing a turnover for the other to pick up the stray ball.

But the intensity of play was not to last. Towards the later stages of the second half, it seemed as though both sides were playing for the draw, with neither wanting to risk much.

The ‘Caps did bring on White for the last half hour to try and get something going, pairing him with Cavallini at the top. But with the yellow card in the first half, Cavallini’s time was cut short as he was substituted as well.

But before he left the pitch, Cavallini did have one chance, a header off a corner, which ended up with the supporters and not in the net.

It all could have been for naught, however, if it was not for Hasal. The young goalkeeper had the best save of the afternoon in the 88’ as the ball was cut in from the right. The ensuing volley was pawed away by the instinctive movement of Hasal, keeping the ‘Caps with a point on the day.

For his part, Cavallini credited Hasal for the first point of the season for the Whitecaps.

“I’m happy for him, we just have to give him confidence,” the striker said.

But he also recognized more could have been done on the day.

“I think we could of finished today with a win,” Cavallini said. “Got unlucky with my chances. Personally, I feel good…much better than last week for sure. We showed improvement, but we are lacking intensity.”

Sartini concurred with Cavallini that the buildup lacked intensity. However, he praised the work of the boys.

He also mentioned that tactically, they are still a work in progress and some areas need to improve.

“We tried to do high risk passes but it wasn’t the right choice,” he said.

Stats of the match

Blackmon put in a Man of the Match performance, recording the most clearances (11) and possession won (9) by any player. He also won all nine of his duels.

The Whitecaps ended the afternoon with 0.5 in expected goals, compared to 1.5 for NYCFC.

It was a decent performance from the Whitecaps, but they will have been sure to notice areas for improvement. Still, it’s a point won against the defending MLS Cup champions.

Up next, the ‘Caps head to Houston to play the Dynamo next Saturday. So far, Houston has one point out of two matches, same as Vancouver. Kickoff is at 3:30 p.m.