Skip to content
BC Division Central Division US Divison WHL

Top Performers of the 2022 WHL Playoffs 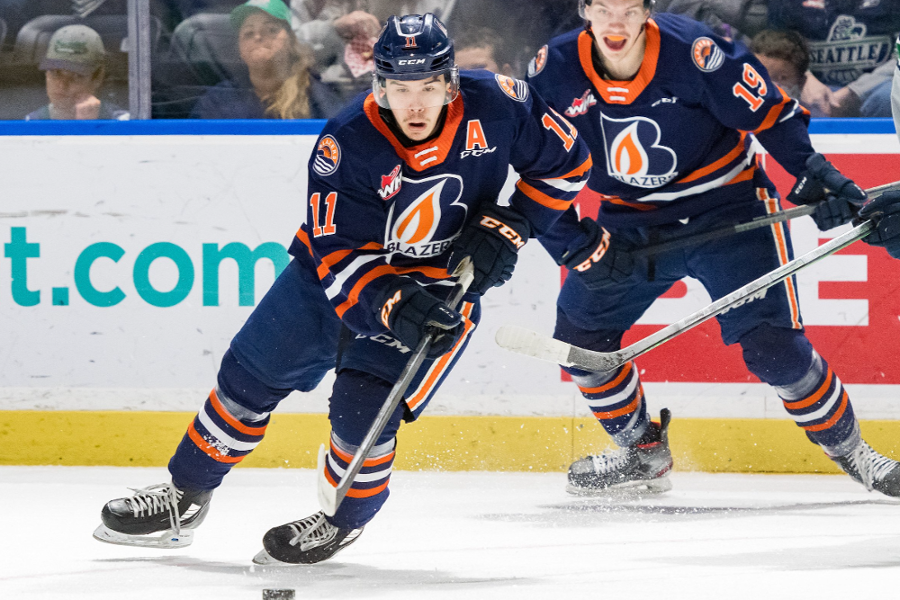 The 2021-2022 WHL playoffs have been a sight to behold, with talented players from all across the league dazzling fans and posting incredible numbers. The Edmonton Oil Kings winning the Ed Chynoweth Cup brought the WHL championship to a close, but impressive plays didn’t come solely from Edmonton’s roster.

Logan Stankoven, a forward for the Kamloops Blazers, is at the top of the leaderboard for multiple statistics. Despite his team not making it to the fourth round, the center still leads the league in points (31), goals (17), power-play goals (7), game-winning goals (4), and insurance goals (4). His astonishing performance in the WHL playoffs earned him the Four Broncos Memorial Trophy as WHL Player of the Year, presented by Kia Canada.

Part of his success was due to the Blazers’ triumph over the Spokane Chiefs in the first round. The Blazers swept the Chiefs in four games, their first game an impressive 9-0 shutout. Due to an unfortunate injury, the Chiefs’ goaltender Mason Beaupit was forced to leave the series early, with Cooper Michaluk taking his place and Manny Panghli backing up. Michaluk,  in his rookie season this year, worked hard between the pipes, but ultimately the Chiefs fell in the series 4-0 to the Blazers.

Stankoven continued to impress throughout the playoffs, scoring 17 goals in 17 games, and the only players who came close to those numbers were Jared Davidson and Kevin Korchinski of the Seattle Thunderbirds, who made it to the WHL Finals.

Seattle Thunderbirds defenseman Kevin Korchinski was another player who impressed this year. An offensive defenseman, Korchinski had 19 points in 25 games played and led the league in power-play assists with 12.

Another defenseman turning heads was Luke Prokop of the Edmonton Oil Kings, who led the league in plus/minus with +23. He put up 16 points in 19 games, including four goals, which helped lead the Oil Kings to the coveted WHL championship title and the Ed Chynoweth Cup.

The series also had a lot of incredible goaltending across the league. Tyler Brennan of the Prince George Cougars led the league in GAA (1.86) and save percentage (.954), and held first place the entire series even when the Cougars didn’t make it out of the first round.

Sebastian Cossa from the Edmonton Oil Kings led his team to the Ed Chynoweth Cup with 16 wins and five shutouts and was only fourth among league goalies with a GAA of 1.93. His last game this season, the one that earned him the title of WHL Champion, was 2-0, a decisive shutout of the Seattle Thunderbirds.

The Thunderbirds fought hard in their playoff run, and a lot of the credit has to go to Thomas Milic, who was extraordinary all throughout the playoffs. He held a .925 save percentage and boasted the second-most wins in the league at 14. With two shutouts and a 2.29 GAA, Milic was a sight to behold, leading his team all the way to the WHL Cup Final.

The WHL playoffs were nothing short of exciting, engaging, and simply fun to watch. Many players drew attention to their skill on the ice, and WHL fans across the country look forward to seeing what each one will do next year.