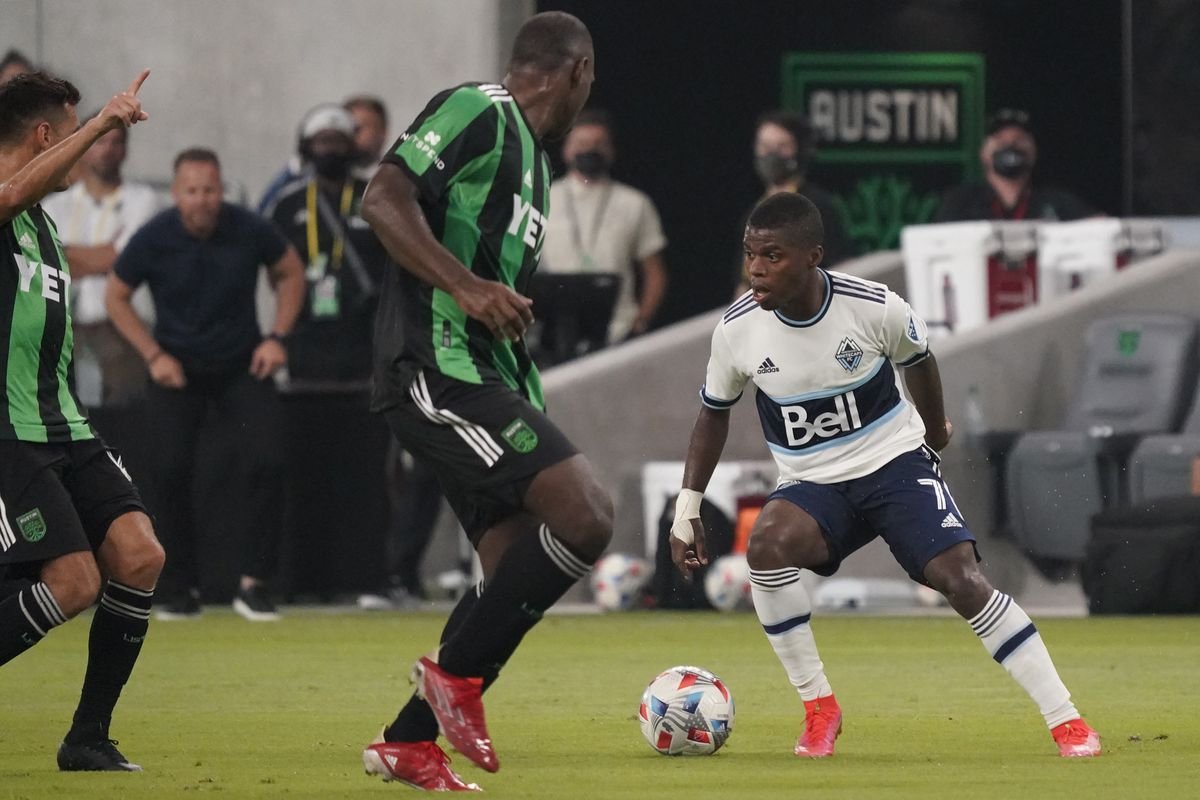 Vanni Sartini took to the microphone today to speak with reporters for his midweek press conference. The loss to Montreal was still fresh in the mind of everyone present, but so too was the upcoming trip to Austin to face one of the best teams in the MLS Western Conference.

The state of play

It’s fair to say this is not the start of the season that anyone—coaches, players and fans—wanted. The Whitecaps currently sit with a 1W-1D-5L record, the worst start to any season in any league they have played in since their founding in 1974.

Sartini said on Wednesday the main thing that is required is for everyone to stick to the plan.

“We had too much trial of interpretation from too many players during this run,” he said. “And times when we actually stick to the plan, stick to our principles and play the way we’re supposed to play for the entire game, the games were actually really good.”

He pointed to the win against Sporting KC, the draw against NYCFC and even the losses against LAFC and Portland as evidence that when they play how they want to, good things happen.

“The other games [against Columbus, Houston and Montreal]…we didn’t do what we planned to do,” he added. “We drifted away from our way of playing, and we wanted to do things differently.”

When it comes to individual performances, Sartini said the basics of the position and role given must come first. Individual players may find themselves being able to add a level of creativity, but that cannot happen without adhering first to the basic fundamental principles the coaching team keeps drilling.

Collectively, there have been a number of occasions where the Whitecaps find themselves playing into the system of the opposing team. They get lulled into complacency, which leads to players being caught out and chances conceded.

Sartini has continually called for intensity, for his squad to play 90 minutes, but he also wants them to be smart while doing it.“What we need to understand is that heart without brain is nothing,” the head coach said. “The most important thing is the organization. If we don’t do what we’re supposed to do, it’s also meaningless to be intense.”

He’s right. Running hell-bent around the pitch and exerting tons of energy means nothing if it is not directed toward a cause.

This cause must be common as well. Individuals do not win games, as much as we may love to see a player carve through four or five defenders for a miracle goal. Those opportunities are few and far between, and not something likely to be seen on a Whitecap side.

Back to Texas for Austin FC

Sartini’s boys get the chance this weekend to try again for road points. Up next is Austin FC, a team that has seen a change in form since their inaugural season last year.

In their first season in MLS, Austin FC finished 12th in the western conference, well out of playoff contention. But after seven games this season, they are second in the west, only two points behind first-placed LAFC.

“Last year, they were very good when they had the ball, but they weren’t very good off the ball,” Sartini said of Austin FC’s play last season. “They played a very expansive football, that when they lose the ball, it put their team in trouble because there was lots of space for the other team.”

He said this year, they have shored up those problem areas, especially in regaining possession when it’s lost.

“They’re much more compact and they play a brand of soccer that is still possession-based, but they try to overload with all the players in a side. If they lose the ball, they’re able to be…not exposed to counterattack.”

Sartini praised the Austin attack, which has registered a league-leading 17 goals (tied with LAFC) so far this season.

He had praise of one player in particular.

“They have a striker that I really like a lot,” the head coach said. “I really like Maximiliano Urruti. He’s a guy that works a lot for the team, makes runs, he defends and he’s a team player as a no. 9. And I think that was a key missing piece that they didn’t have last year.”

Urruti is a leader in the final third, posting an 83.8 percent passing success rate. He has only two goals to his name so far this year, but his ability to distribute the ball out wide makes the whole team more expansive and helps provide space for himself and his strike partner to get in between defenders.

The Whitecaps will have their hands full with Austin FC this year. Last year, Sartini’s second match in charge was against them, where the Blue-and-White nabbed three points after a formation change at the half.

“The first half [on Sept. 4, 2021], they destroyed us. Then we made some changes in the second half. It was actually the game when I decided to go with a back three at half time because of the way that they were played.”

Square pegs into round holes

But does Sartini keep that formation? Is three at the back the way forward? Are the wingbacks working?

We’re seven matches in and perhaps a sober second look is necessary.

Sartini conceded that they are revisiting the positions of some players.

“We may expect some players to be better in some positions, it’s true,” he said. “So, we are actually reconsidering it. We are reconsidering the position and the roles of players.”

One player in particular that has been working in a new position this year is Cristian Dájome. He has found himself on the flanks this year as a wingback, rather than the more attacking position he is accustomed to.

“He was more effective when he plays striker with us than he is as a wingback at the moment,” Sartini said. “As a wingback, he showed us that he can do it, but probably at the moment, what we think could have been his primary position…it needs to be one up top.”

The Dájome experiment at wingback was largely in part to his ability in 1v1s and his pace. But it has also stifled his offensive creativity, relegating the player to playing crosses in but never being on the end of them.

Other players have found themselves in new positions as well, to varying degrees of success.

Cristián Gutiérrez has played on the left of the back three in centre back this year. Sartini has said he believes Gutiérrez capable of left wingback as well, but he is most comfortable in a left back position, something that doesn’t exist in a Sartini formation.

Jake Nerwinski began his Whitecaps career as a right back, but has found playing time in the last couple years in the left centre back position as well.

Javain Brown has at times struggled in the wingback position, which is further forward that his traditional right back-favoured spot.

Other players too are being fit into the formation rather than the formation being dictated by the players available and their preferred positions.

The versatility of a player is an amazing gift for a coach to have, but not everyone is capable of it. We may be seeing that play out in front of us right now.

What remains to be seen is whether this experiment is a bust or if the players are able to succeed to the level required for the team to flourish.

Éric Godoy played the first half of Whitecaps FC 2’s 2–1 win against Tacoma Defiance.(The Seattle Sounders MLS Next Pro team) It was a welcome sight to see the defender get back on his feet after persistent tightness in his left calf.

Sartini said the plan for his full recovery is going well, but that he is not ready for a full 90 minutes.

“He will come with us to Austin, be kind of a solution on the behind if we need a defender in the second half.”

In the week following the Austin FC match, the Whitecaps have a bit of a break. They were scheduled to meet the Seattle Sounders, but that match has been postponed, due to their commitments in the CONCACAF Champions League final.

But it does give players like Godoy additional time to get back to full fitness.

“The plan is to train him next week and play 90 minutes in the MLS Pro next week since we play in Vancouver,” Sartini said. “This way, he will be ready to be in the mix to—hopefully with his calf—in the mix for a spot in the starting XI against Toronto [on May 8].”

Ryan Gauld is also in treatment after taking a nasty tackle in the match against Montreal. He was subbed off on concussion protocol after his head took a hard bounce off the pitch.

“He had symptoms till today basically,” Sartini said of his creative midfielder. “He took a very, very big hit unfortunately…So, he didn’t do anything for these three days besides resting, because we had to wait for him to be complete symptoms-free to start the process that’s going to bring him back to the field.”

Sartini said Gauld will remain in Vancouver for the Austin trip, working on light training and fitness once he has been cleared to do so.

The Andrés Cubas rumours to Vancouver took another step earlier today. French media reported the defensive midfielder was on his way to New York to complete a medical pending transfer to the Whitecaps.

Interestingly, Whitecaps sporting director Axel Schuster was also out of town.I asked Sartini if there was anything to read into both of these things overlapping.

“The club is working,” Sartini said. “The thing that I can tell, that you have a lot of facts straight, one thing is wrong. I won’t tell you what is wrong, but only one thing that you said is wrong.”

Read into that what you may.