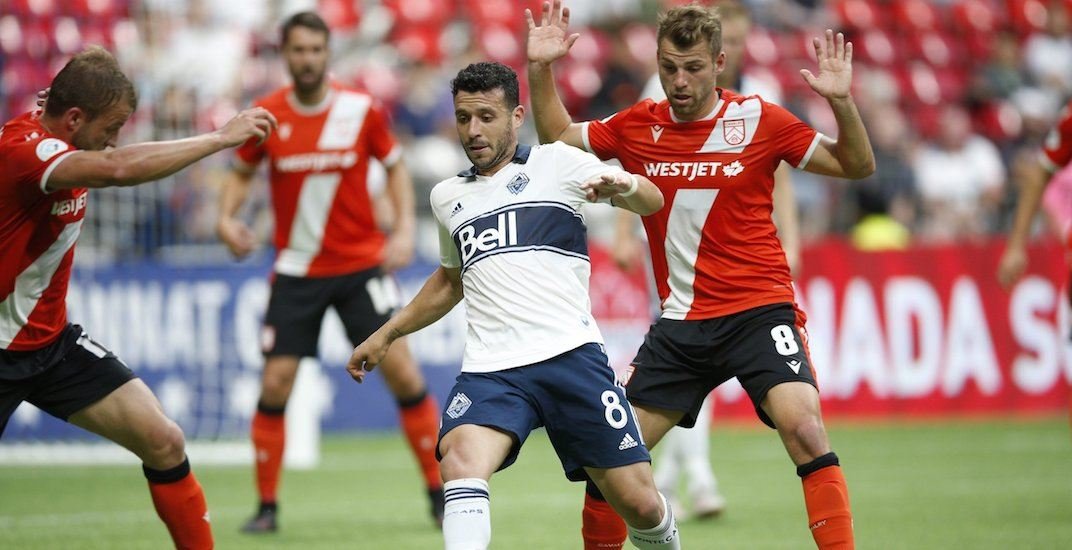 The series of midweek games continues for the Vancouver Whitecaps as they head into their second match of a three-game road trip. However, they are going to switch gears with the next game being against Cavalry FC in the Canadian Championship.

The Calgary club beat the team three years ago in a two-leg matchup, the only times they have met in play. The Whitecaps will head to Alberta, hoping history does not repeat itself.

The Canadian Championship in Cowtown

A lot can change in three years—coaches, players and fortunes. It can make repeat matchups feel entirely new.

That was the mindset of Vanni Sartini as the Whitecaps prepared for the Wednesday game against Cavalry.

“I wouldn’t say [it’s] revenge,” he said. “To be honest, I was an assistant coach at that time, and Cavalry won the match fair and square. They deserved to be there. So, there’s no revenge. I would say it’s more of a…kind of a cathartic moment, like the fates brings us to play Cavalry again.”

Sartini also mentioned that a win against Cavalry could potentially lead to semifinals against Pacific FC, the Canadian Premier League team that beat the ‘Caps in last year’s Canadian Championship.

“It’s kind of a nice way for us to redeem ourselves of the disappointment we gave to our fans in the last seasons of the Canadian Championship. So, we really look forward to the occasion.”

But even though Cavalry lead the head-to-head against the Whitecaps, the pressure is still squarely on the MLS club. They play at a higher level, have more resources in terms of salary and cap space, have the larger stadium and have a greater ability to scout the international market for players.

On top of all this, Cavalry FC will have their fans behind them at ATCO Field. Vancouver fans should remember the support they gave their club on May 11, helping the team to a 2-0 win against Valour FC at BC Place.

“It’s a no appeal game,” Sartini said of the Canadian Championship match. “So, we kind of embrace the pressure, and we need to live with the pressure. We need to play fearless.”

But here’s the sticking point: The Whitecaps have had horrible results on the road this year. They haven’t played horrible per se, but they have no points in MLS to show for their efforts. Sartini believes their performances have grown as the season has developed.

“We’re in a good moment,” he said. “We’re growing. After Austin, when we had that week without [a] game, we worked on everyone. We worked on the tactics. We worked on fitness. But also, we worked on our brain. And we really…kind of signed a new pact between the group on how to be a better team and how to be a successful team again. And again, we’re going in that direction.”

He called the match against Charlotte last Sunday one where “the luck is not going in your favour, but the performance was really good.”

He said that if the team played in Calgary as they did in Charlotte, he believed they would come away with a win.

Ryan Raposo agreed that the team has been doing better as of late.

“I would say we’ve been playing much better,” the Whitecaps winger said. “But even at the start of the year, I would say results weren’t just going our way and certain calls weren’t going our way. But more recently, they have.”

Raposo said the vibe within the squad is “very, very good,” and that they have a belief that in any match, they can bounce back.

On playing Cavalry FC, he said they are prepared to play “a motivated bunch.”

“They’re at home. They’ll have their fans behind them. But I mean, we’re coming from just playing Charlotte here with 30,000 fans.”

Part of the Whitecaps’ woes have been out of their control, to a certain extent. They have not had a 100 per cent fully fit squad this entire season.

All of these players missed the game against Charlotte last weekend; however, Sartini said there is hope at least a few may be ready to play in Calgary.

“In terms of health, we are happy that everyone is doing, I would say, quite well,” the head coach said. “I think everyone is okay. Asymptomatic, I’ll say it like this. So, everyone’s doing well. In terms of getting back, because of the positive tests, we’re still waiting on some results. So, there’s still the possibility that some of them can be available tomorrow, but I don’t have the news at the moment.”

He also mentioned that the Whitecaps will have two goalkeepers available, but they are not entirely sure who they will be.

Max Anchor, the 17-year-old who made his professional debut only a couple days ago, is available. Ben Alexander, who played for the Whitecaps’ second team is also registered for this competition.

“We’ll make a decision on who plays Wednesday according to who we see fitter.. If Cody and Isaac are going to get back, of course it’s a different situation.”

Thoughts on the Canadian Championship match

There are not many players in the current Whitecaps’ roster that were around the last time these two teams met.

Only Russell Teibert, Eric Godoy and Nerwinski played three years ago. Raposo was a part of the club but did not play. In addition, David Norman Jr., who now plays for Cavalry FC, was registered to the Whitecaps back then.

It is likely Teibert will play on Wednesday. I also expect Godoy to play as well. Godoy’s minutes are being managed right now as he returns to full fitness. He’s good for about 90 minutes a week, and the last time he played was last Wednesday.

Nerwinski is out of the lineup right now on health and safety protocol, but if he clears that before the game, he is a possibility as well.

Lucas Cavallini will also be available for selection. He missed the match against Charlotte due to yellow card accumulation in MLS.

Raposo did not start the match on the weekend, so I expect him to be good to start. The Canadian winger had a good match against Valour FC, and has been one of the best players on the squad over the past month.

The hope is that the majority of players on health and safety protocol will be approved for selection. The timing suggests that it’s possible, meaning the Whitecaps are getting healthy again at the right time.