Terminal City Thoughts: The Canadian Championship semis is nigh 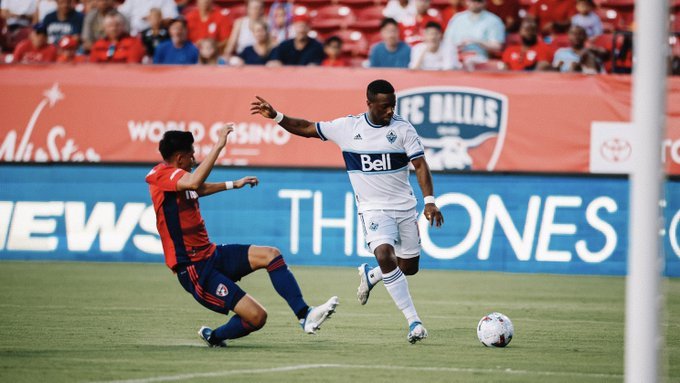 It’s strange territory for the Vancouver Whitecaps to be in right now, sitting on the edge of their first cup final since 2018. But that is exactly where they are as they get set to meet York United FC of the CPL tomorrow at BC Place in the semi-final of the Canadian Championship.

Let’s take a look at the team the Whitecaps are set to play.

Who is York United FC?

York is one of the founding members of the CPL and plays out of the North York district of Toronto. Currently, they are the only CPL club that shares a city with a MLS club.

Their history has not been much to write about. Arguably, their best year in their short history was their last. It was the only season in which The Nine Stripes made the playoffs, being eliminated in the semi-final (also the first round) by Forge FC.

And so far, this season has not seen them improve. They currently sit 6th in the table of 8 teams with a record of 2W-5D-4L.

“They press a lot,” he said. “And I don’t know, because they play against us, [if] they’re going to chance their approach or not. But in any case, we need to be very careful and…simple and humble when we have the ball in order not to lose the ball and giving them easy counter-attack because they can be very fast.”

But while they may be quick and aggressive, York does not seem to do much with the ball. They have only six goals in their 11 matches so far, significantly fewer than all other teams in the CPL.

However, they also do not concede many either. Only seven goals have been scored against them this year, which is also the lowest in the league.

Much of this comes from Niko Giantsopoulos, York’s goalkeeper and a name that many Whitecap fans will remember. The Blue-and-White signed Giannopoulos to a four-day loan contract during the height of the injuries and illnesses affecting the club back in May of this year.

While he never played, the news of the unlikely loan spell made Giantsopoulos a bit of a name for a weekend in Vancouver football circles.

So far in the Canadian Championship, they have eliminated Atlético Ottawa and last season’s CPL champions Pacific FC, both by penalty shootout.

The path goes through York: How the Whitecaps set up

Canadian Championship rules state that only 18 players are allowed to be dressed instead of the 20 that are allowed in MLS matches. In addition, all clubs must have at least three Canadian players as starters.

The easiest position for the Whitecaps to pencil in on the team sheet is the goalkeeper. Cody Cropper has done very well coming in for the injured Thomas Hasal. Hasal rejoined full team training this week, but is not quite ready for first team action.

“The plan is more or less the same that we’ve done with any other player,” Sartini said of his goalkeeper. “He will play 1-2 games with the WFC2 in order to get back into the rhythm of the game, and then he will be available again. And it will be nice competition because, you know, Cody, when he came on he was very good. So, I think that I’m happy because at the moment, we no longer have a number 1 and number 2, but two number 1s.”

Érik Godoy was also rested for the FC Dallas match last weekend, which means he will be a likely starter in the back line.

Tristan Blackmon is still working his way back to full match fitness, so expect him to be on the bench. I still believe Sartini will go with his back 3, so look for Ranko Veselinovic and Jake Nerwinski to start.

In the midfield, you will get your first Canadian player. Russell Teibert is back after sitting out for a few weeks due to an eye injury. But he played on the weekend and will likely be back in the lineup tomorrow.

Normally, I would place Michael Baldisimo in for this match. He’s a player that does not get much game time, but as a Canadian player, he would be well suited. Unfortunately, he suffered a knock in a warm up game for WFC2.

“The idea [was] for him to play with WFC2 on Friday was to give him 90 minutes because he was being considered to start this game,” Sartini said. “But unfortunately, he’s out because he had a minor concussion…he’s getting back to being very good, but he’s not yet ready to play.”

It’s a tough setback for the young player, and hopefully he recovers fully and quickly.

In lieu of Baldisimo, a triangle of Leonard Owusu and Ryan Gauld would fit. Andres Cubas would be nice to come on later from the bench. He is close to full match fitness, but not completely there yet. It seems likely that Sartini rests him as much as he can for the match against New England Revolution on July 26.

In wingback, Marcus Godinho is a lock in my mind. He’s another Canadian player and has done well over the past month with increased game time. On the left, Cristián Gutiérrez is injured. He would have helped fill the Canadian contingent, but he will not be suiting up. Look for Luis Martins to play wide.

With Gauld slotting in as a no. 10, I’m going with a striking pair of Lucas Cavallini and Brian White. White came on as a sub against FC Dallas, so he’s well rested. He’s also looking to jumpstart his game, and a start in the Canadian Championship playing with the other two frontmen could be exactly what he needs.

It’s easy to get ahead of ourselves and think about the “what could be.” When asked what winning the Canadian Championship would mean, Sartini allowed himself a moment to ponder that thought.

“For me, it would be fantastic,” the head coach said. “It would be the first trophy that I win as a head coach. You know? It would be like winning the Champions League.”

But he was quick to bring himself back down to the match at hand.

“First of all, it would be fantastic to arrive in the final. And for the club too. As I said, I think the last time that we won this cup was 2015, and it was the last cup that we won. So, it’s time for us to celebrate again, and it’s time for us to put another banner in our locker room and to have a little bit of glory that also can give us the ignition to finish the season, to make the second part of the season very well and make the playoffs.”

The final will be played against the winners of the other semi-final, which sees the other two MLS clubs, Toronto FC and CF Montréal. Both have won two of the last four competitions.

Neither side will be easy for the eventual winner of the Whitecaps and York.

And the Whitecaps will be hoping it’s them in the final to try and make their first major trophy in seven years a reality.