Terminal City Thoughts: Get ready, May is demanding 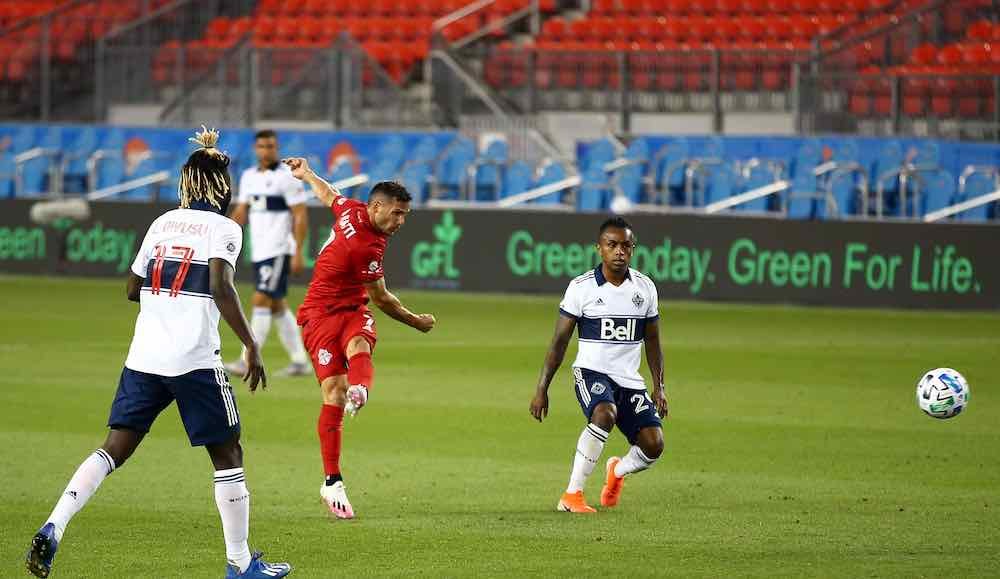 It’s the calm before the storm for the Vancouver Whitecaps. After a two-week break, the games are about to come fast and furious with the club playing once every three or four days.

It was also the final day of the early transfer window, and the ‘Caps had an announcement to make. Will new additions be what they need to get out of their slump?

May will likely play a huge role in deciding whether the ‘Caps can shake off their sleepiness, or go back under the covers for the rest of the season.

A week without games

Having the Seattle Sounders game postponed was probably one of the better things to happen to the Whitecaps at this stage of the season. It gave them time to check in and assess, not only within the coaching team, but with players as well.

“I was happy that we didn’t play,” Sartini said. “That gave us the possibility also to really reset, try to reset at least, and try to really focus on this enormous number of games that we have [going] forward.”

The head coach acknowledged the last few games have not been good performances, but that the extra time away from the match day pitch let them focus on things they are often not able to do with such a busy schedule.

“It helped us to [have a] really deep conversation with the players, a lot of work on the field on things that we think that we want to improve,” Sartini said. “Also, it gave us the possibility to recover a bunch of players…[in the] last few days, we have Ryan Gauld back, [Déiber] Caicedo back. So, it helped us in order to have more choices and options.”

Today was the deadline for any MLS player movement, and the Whitecaps have been busy in the last couple of weeks, securing the signing to two players.

Andrés Cubas has signed a four-year deal until June 2026. It contains an option for a further six months to the end of the 2026 season.

The new Designated Player is the third for the ‘Caps, and his numbers from his previous club show why sporting director Axel Schuster went so strongly in trying to obtain his signature.

The Paraguayan international was most recently with French Ligue 2 Nîmes Olympique. In the current season, the defensive midfielder led the league in combined tackles and interceptions.

Before being relegated last year, Cubas posted one of the highest numbers for successful tackles in Ligue 1. His ability to do that, even with a club at the bottom of the table, shows exactly how he may be used with the Whitecaps.

He’s what the doctor ordered, a strong presence that can sit in front of the back line and win balls, the first line of defense.

Another position that’s been lacking this year has been at left wingback. Under Sartini’s preferred formation, wingbacks feature heavily, but that does not mean the Whitecaps had the personnel to execute it.

Luís Martins is the answer the Whitecaps have chosen. The Portuguese fullback bring a wealth of versatility, experience and leadership, things that Sartini said are needed in a young Whitecap squad.

Most recently, Martins was with Sporting KC. His experience in both MLS and in Europe before made his an attractive option.

The Whitecaps have been sorely missing a left wingback since the departure of Ali Adnan. Since then, the position has become somewhat of a ‘fit whoever you can’ role, with the hope that someone on the existing squad would step up and make it theirs.

That has not happened. This is a position that was identified by many as necessary in the off-season, so it will be surprising to some it is only being filled now.

What this also means is that the Cristian Dájome experiment at wingback may be over, or at least, significantly curtailed. It just has not panned out like the coaching staff—and likely, the player—had hoped.

Martins brings experience in the role and the ability to fit into other areas Sartini may have him play. His leadership on the pitch will also be extremely important given that, at times, it’s looked like there was little.

Now that the extra week of rest is over, it’s back to game time. Next up, Toronto FC comes to BC Place, hoping to continue their push up the Eastern Conference table.

But they are in the midst of a busy schedule themselves.

“They play tonight (Wednesday) in Cincinnati,” Sartini said. “They come on a week that is three games in a week, and I don’t know if they’re going to do some rotation.”

Sartini said he admires the attacking talent Bob Bradley, his coaching counterpart, has at his disposal. But he also believes there are opportunities for the ‘Caps to do their own damage.

“I think they have a lot of attack-minded players, and that of course has a good side and a flip side and the flip side is that when the other team is able to get out of pressure—the space to be dangerous and aggressive—I think for that reason, we will need to be very, very good on our defensive side in order to minimize their chances because I know we will have chances to score.”

This also marks the first match of the Whitecaps’ own long stretch, a total of six (possibly seven) games between May 5 and May 28.

“I’m very excited. I really, really, really like when we play every three days. I love it,” Sartini said. “We have a lot of games at home. So, I’m really excited by the fact that we’re going to have our fans at least for the first games backing us up. For the type of coach that I am, I’m really, really excited also because that gives me the possibility to give chances to everyone because we want every time to play with guys that are 100 per cent.”

The goal, the head coach said, was to move closer to the final playoff spot in the Western Conference. Currently, they sit eight points out of that spot.

They also want to progress in the Canadian Championship. The first match of that tournament begins May 11 against Valour FC at BC Place.

But just when things were going well on the injury front, with players getting some much-needed recovery time, another Whitecap was added to the list.

Tristan Blackmon has suffered a sprained knee, which could keep him out of the lineup for up to five weeks.

“He’s done very well so far, and that’s unfortunate,” Sartini said. “That’s a thing that can happen in soccer…contact injuries. It is what it is. The only positive note of this injury is that it happened when Érik [Godoy] came back. So, at least we are not having a crisis in terms of the number of defenders.”

Gauld has also recovered from his concussion originally suffered on April 16 against CF Montreal. Caicedo is also back in contention for the game against Toronto.