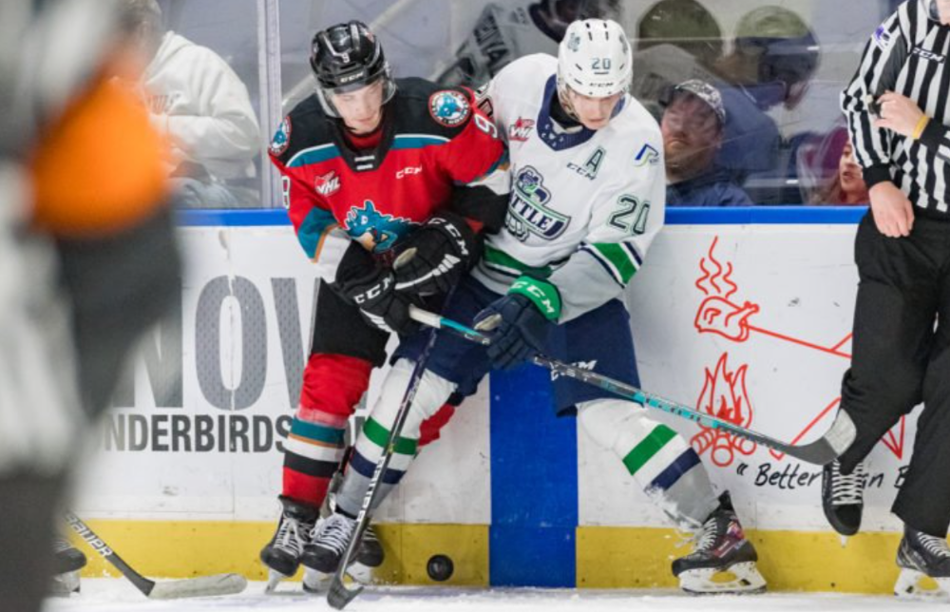 The Kelowna Rockets took two of three this weekend to move into fourth place in the Western Conference.

Starting on Friday,  Captain Tyson Feist scored twice as the Rockets got the weekend started off right with a 2-1 win over the first place Kamloops Blazers. The goals were the first for Feist in 16 games.

The game was scoreless until Reese Belton opened the scoring for the Blazers at the 10:07 mark of the second period. Later, Feist notched his 10th and 11th goals of the year. Fiest’s 10th of the year was a one timer set up by Colton Dach to tie it 1-1. In the third, Feist got his 11th which was the game winner with a seeing eye shot at 5:58.

The game also featured two strong goaltending performances as Talyn Boyko made 30 saves for the victory and earned second star of the game. With the injury to Dylan Garand, Dylan Ernst continued to hold the fort down for the Blazers. He made 33 saves to take the loss.

The Rockets had a much tougher time in Kamloops on Saturday night.  Led by Luke Toporowski, Logan Stankoven and Daylan Kuefler the Blazers trounced the Rockets 6-2.

Toporowski had a five point night, including a hat trick while Stankoven had four assists. As for Kuefler, he had three points which included two goals and one assist.

Toporowski opened the scoring on the power play at 8:41 of the first on the power play. Then 36 seconds later, Toporowski flew down the right side and beat Talyn Boyko to make it 2-0. The Rockets were able to tie it up quickly in the second as Tyson Feist scored the third straight Rockets goal at 1:02 to make it 2-1. And then at 4:44, Colton Dach got his 17th to tie it at 2-2.

Toporowski, Stankoven, and Kuefler then took over the game. Kuefler got his 26th at 14:57 of the second to take the lead for good. Ethan Brandwood then scored his fifth at 5:03 while Toporowski got his hat trick goal at 9:59. Kuefler wrapped up the game with a powerplay goal at 18:17.

The Blazers ended up 2/8 on the power play while the Rockets were 0/3. Toporowski, Stankoven, and Kuefler were named the three stars. Ernst made 24 saves for the win for the Blazers while Boyko made 32 saves for the loss.

The Rockets weekend wasn’t finished. They headed down to Kent to wrap up the weekend against a potential first round match up, Seattle Thunderbirds.

Andrew Cristall had two goals while Tyson Feist continued to be hot adding two assists. The Rockets moved into fourth place in the Western Conference with a 4-3 win over the Thunderbirds.

Kelowna’s power play was the key to victory going 2/5 on the game. Both of the goals were in the first period. After Jared Davidson opened the scoring for the Thunderbirds at 4:38, Andrew Cristall scored at 10:06 to tie to 1-1. 56 seconds later. Jordan Gustafson scored his 20th to give the Thunderbirds the led but Colton Dach tied it at 2-2 with the Rockets second power play goal.

Reid Schaefer struck early in the second for the Thunderbirds to give them the lead 3-2. Then Cristall got his second of the game off a tip in to tie it at 3-3 at 10:55. Rilen Kovacevic gave the Rockets their first and only lead in the game with the game winner at 12:05.

It was a productive weekend for Feist. The Captain had three goals and two assists for five points this weekend.

This was the Thunderbirds third straight loss this weekend. They lost 5-3 to the Spokane Chiefs on Friday. Then 4-0 to the Everett Silvertips at Climate Pledge Arena on Saturday. The Thunderbirds 0-3 record combined with the Rockets 2-1 weekend put the Rockets one point ahead of the Thunderbirds for fourth place in the Western Conference.