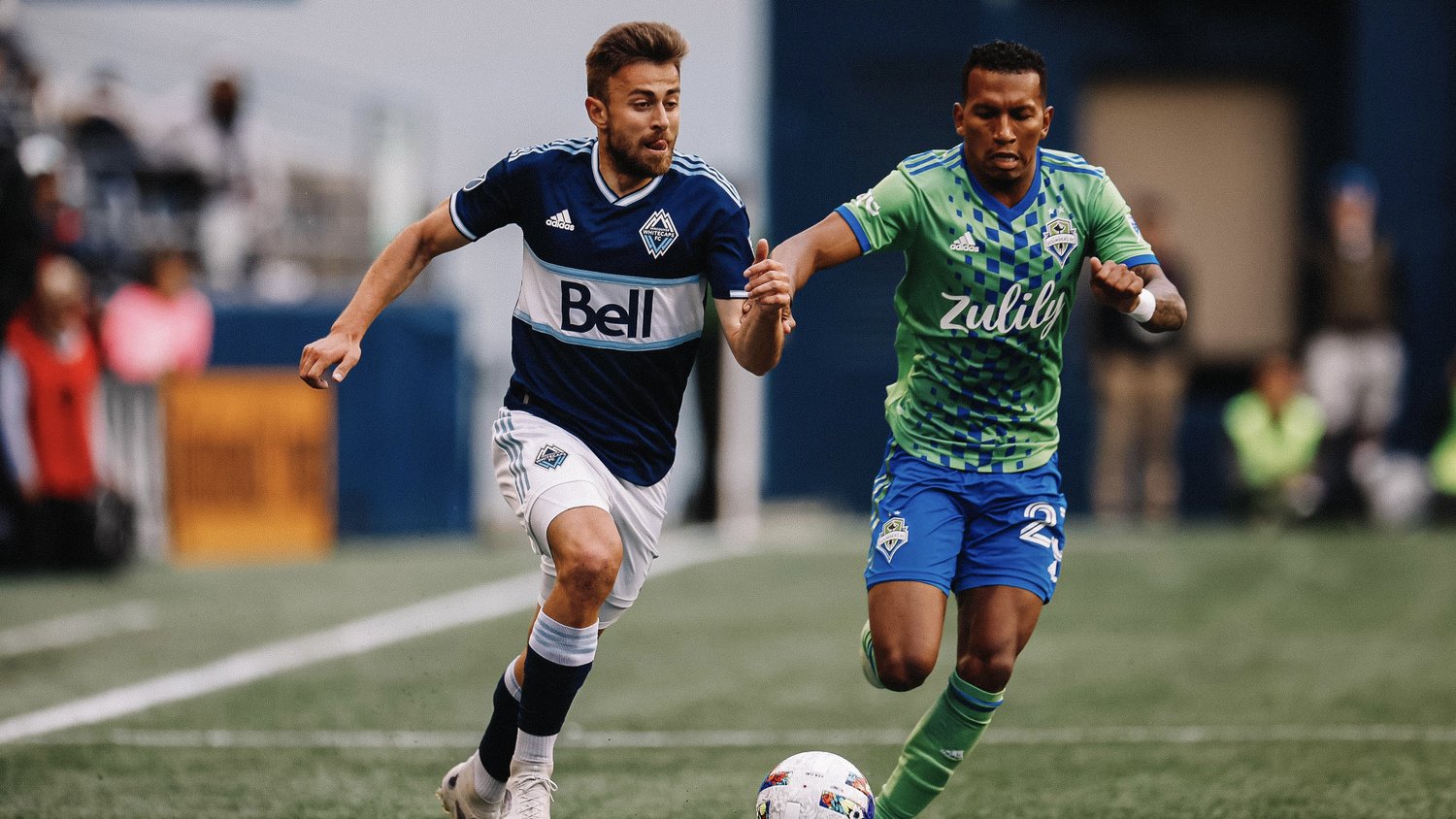 The Vancouver Whitecaps went into their match against the Seattle Sounders knowing a win would move them into the playoffs and a loss would let their Cascadia rivals jump them in the standings.

Vanni Sartini knew this was not going to be an easy match. However, given international call ups, he felt it was the best time to try and get a result at Lumen Field.

Perhaps the biggest surprise of Sartini’s lineup here was that it was not a surprise.

First of all, he went for the same formation that he’d used in the past couple of matches. That put Florian Jungwirth back in his role as a no. 6, where he has done well.

The back 3 was unchanged. Érik Godoy got back-to-back starts, made possible by the 10-day break between matches with the international break.

If you were looking for a surprise, the only one that may give that is the start of Luís Martins, his first as a Whitecap. But with Cristián Gutiérrez injured and Javain Brown on international duty with Jamaica, a start for the Portuguese player made sense. It’s time to see what he can offer for a longer stretch of minutes.

Ryan Gauld took the place of Sebestian Berhalter as part of the midfield triangle with Leonard Owusu and Jungwirth. His creative presence was missed for much of the match against Real Salt Lake. When he came on in the second half, the Whitecaps were more dynamic and dangerous.

There were also no surprises at the top as Brian White and Deiber Caicedo lined up as strikers. But with Gauld directly behind them, the hope was that they had more service and were able to be more effective in the final third of the pitch.

With the Sounders being without several key pieces due to international duty, the Whitecaps hoped this was the best time to meet their Cascadia rivals at Lumen Field. In most seasons, this is arguably the most difficult match in the calendar year.

The ‘Caps hoped that a somewhat depleted squad in green would give their Blue-and-White a chance.

It was not the start the Whitecaps hoped for.

The Sounders started with early pressure, forcing the ‘Caps on their heels. The visitors started well to absorb the pressure, but a quick mistake in the midfield put them down before they had even broken a sweat.

Jungwirth and Ranko Veselinovic were caught ball-watching, thinking the other was going to take it. Their hesitation let the Sounders break free with the ball and into the box. Cody Cropper was excellent in the first save.

But former Whitecap Freddy Montero pounced on the rebound. Cropper attempted to get it as well and ended up bringing Montero down. Referee Lukasz Szpala wasted no time in pointing to the penalty spot.

Nicolás Lodeiro converted the penalty in the fifth minute, giving the Sounders the easy lead.

Possession stayed with Seattle, but the Whitecaps were able to string a couple decent passing sequences together. On one of them, Caicedo found himself at the end of the passing play, but his shot was saved. It was also ruled offside.

But miscommunication continued to hurt the Whitecaps. Montero picked up the ball in the final third and passed it into the box. It was quickly dispensed to Raúl Ruidíaz who made no mistake, sending Cropper the wrong way and making it two for the Sounders in the first half.

The ‘Caps did have one decent opportunity. Caicedo put the ball into the far post from a corner. White was able to keep the ball in play and get it to Nerwinski, who took the quick volley.

But it was wide and into the defender. There were calls for a handball, but VAR did not agree. On replay, a penalty call would have been harsh.

The Sounders were comfortable in the first half, and the 2-0 scoreline showed that. The Whitecaps were left with everything to do and mounting obstacles to get anything done.

Sartini came out in the second half with a change to get his squad back into the match. Caio Alexandre came off the bench in place of Owusu to try and get more forward movement on the ball.

The direction of play was slanted towards the Whitecap net. Seattle kept pressuring the ‘Caps, not giving them any space. Vancouver was hemmed in their own defensive space for the majority of the beginning of the second half.

That pressure paid off yet again. In the 54’, Ruidiaz again got on the end of a cross from the left. His shot from within the 6-yard box was simply a redirection. Veselonivic tried to get his body in between the cross, while he may have had a touch, it was not enough to divert it.

It was desperation time for the Whitecaps. Andres Cubas was given his debut for the team after only arriving by plane four days before. It was time to see what the Paraguayan could offer. It took just a few minutes for his first yellow card, unlikely the start he wanted.

In the 62’, Ruidíaz almost got his hat trick. He got around Cropper and had the wide open net, but Veselinovic was able to get back and save it off the line. Ruidíaz would have to settle for the brace as he was subbed off minutes later.

Nothing the Whitecaps attempted was able to turn the tide. The disparity in the strength of the squads was on display.

In the 75’, Nerwinski was substituted on a concussion protocol after a length of time on the pitch. The Whitecaps have been forced into several of these types of subs this year, which is disconcerting.

Roldan made sure to send the Whitecaps home in style. He added a fourth for the Sounders in the 89’, capping off what was surely a game done and dusted.

The Blue-and-White leave Lumen Field, winless against the Seattle Sounders in the last 15 matches. It’s a record they will desperately want to end the next time the two meet in BC Place.

For his part, the head coach was not one to mince words.

“It was 100% not our game,” Sartini said. “Everything that could have gone wrong, went wrong. And it’s our fault.”

He said there were moments of the first half where the squad played alright, stringing passes together and moving up the pitch, but he was frustrated with the lack of intensity and chances.

“We’ll analyze the performance and look at the mistakes and go for a win in Dallas,” he said.

Gauld echoed his coach’s sentiments about the failures in the match, stating that a game like this should not happen, and that it should especially not happen against a rival.

“The frustrating thing is that they wanted it more than us and we cannot let that happen…there is not a lot I can say now and we’re all frustrated and all pissed off, Gauld said.

Zero shots on net to Seattle’s eight. That left an xG gulf between the two of 0.7 for the ‘Caps and 2.7 for the home side. You will not win games without shots on net.

The Whitecaps head to Toyota Stadium to take on FC Dallas on Saturday, June 18. Kickoff is at 6 p.m.