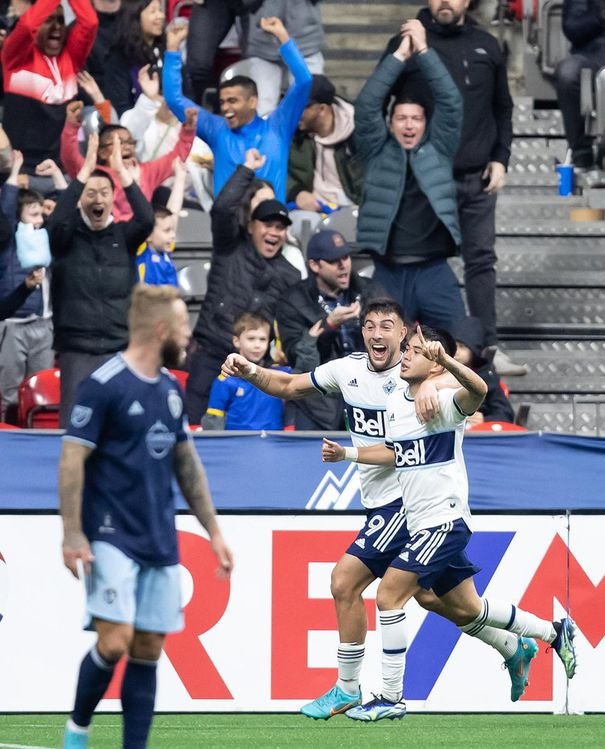 It was a night of firsts for the Vancouver Whitecaps and Ryan Raposo.

“I had two to three conversations with Ryan during the preseason because, especially with the system he always played as a classic winger, in a 4-3-3 or 4-2-3-1,” said Sartini after the win over Sporting KC. “He was feeling a little bit left out, and I told him ‘You need to work a lot because, probably, you’re not going to start at the beginning, but you’re so versatile. He can play wingback, he can play striker, he can play number 10.”

Raposo is naturally a midfielder and he can also play the wing and even wing-back. He played wing-back in the game against Sporting KC and admitted he played that position for the first time in his life. To his credit, he played well displaying a high work ethic.

Raposo was a bit surprised he was getting the start.

“It gave me that extra bit of confidence that I really need to hear, that little push that he (Sartini) truly believes in me,” said Raposo. “For example, in the past, the games that I’ve started it’s been circumstantial per se, we need to rotate the squad or something of that nature. So yeah, I felt like I’m just there to do the job, but we’ve had two weeks since the last match. I’ve trained really well over the past two weeks. I did my part just putting in the work every day with my teammates. Again, when Vanni said I was going to be starting, it gave me that real confidence boost that I needed.”

It has been a long journey for the 23-year-old to get to his first MLS start.

Raposo joined the Toronto FC academy at the age of 11 but was released two years later because he was deemed “too small and too skinny.” He then joined the Burlington Youth Soccer club and joined the provincial program at 14. At 16, he moved to Vaughn SC

In his last year with Vaughn in a game against Sigma, he fractured his right fibula. He had to grind with months of rehab before getting an offer from Syracuse University, the school he really wanted to go to.

Up next, was MLS. He was taken fourth overall by the Whitecaps in the 2020 MLS Superdraft. He made his MLS debut on March 7, 2020, by coming on as a substitute against the Los Angeles Galaxy. In his first two seasons, Raposo has made 36 appearances but has made only five starts.

Raposo hopes to get more starts under Sartini who says the Hamilton Ontario native has worked hard in training.

Raposo was also motivated by his mother Lori who works as a Cardiac Nurse in Hamilton. She was in the building when he scored his first MLS goal.

“I found out yesterday (Friday) that I was going to be starting and texted my mom,” said Raposo. “ She was on night shifts at the hospital. I messaged her late, she replied and actually booked the flight from Toronto, she had to drive to Toronto an hour then she flew to Abbotsford and I drove to Abbotsford to pick her up. It meant the world to me that she was there. As soon as I hit the back of the net, I pointed towards her section. She was in that general section so I knew she was there watching. I can only imagine what she was going through, probably crazy and in tears.”

Whitecaps captain Russell Teibert has been with the club since their inaugural season in 2011. He too was once a young guy that had to overcome challenges and still does to this day. He spoke about Raposo’s goal.

“I’m not going to say one player is made or broken out in one game,” said Teibert. “So Ryan’s still got a ton of work to do just like every other person on this team because you can always get better, you can always learn, you can always grow…. I think that’s what he’s done and then he gets his goal, look how happy he was, we were so happy for him. He’s such a good kid and he’s such a good teammate, he never complains and he does the work. That’s all you can from somebody, is give 100 percent and he definitely does that.”

Raposo may not start every game with the Whitecaps but he will continue to work hard and make sure he can get more starts and build on Saturday’s success.

The journey has just begun.