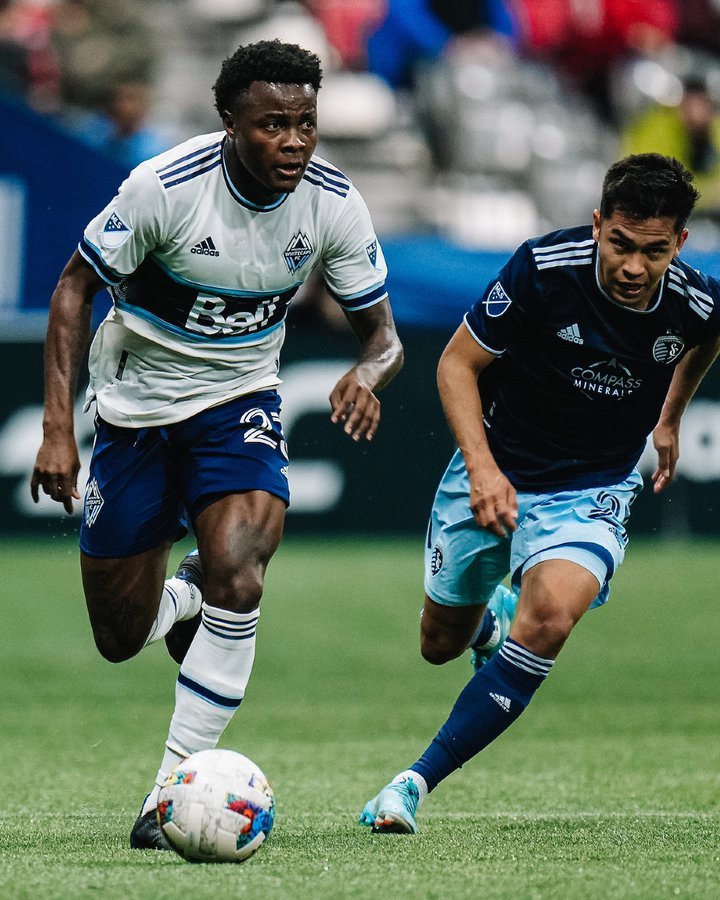 So Ryan Gauld and Brian White both start together for the first time this season and both missed the last game against LAFC with injuries. Deiber Caicedo starts upfront with White with Cavallini on the bench since he got back from international duty on Thursday evening. Ryan Raposo makes his first start of the season. It is interesting to see Florian Jungwirth on the bench.

Leonard Owusu was not on the bench as he is dealing with a right-foot contusion.

From the get-go, the Whitecaps were hungry for a goal.

They dominated possession in the first five minutes and throughout the first half were really closing in on KC’s defenders trying to force a turnover. Turnovers were forced thanks to Sebastian Berhalter’s presence in the midfield. He was really making good passes too.

Having White and Gauld did help but the ball control in the box kind of prevented the Whitecaps from scoring. Deiber Caicedo’s crosses were very good as he knew where to find his teammates. There were two crosses that Tim Melia saw easily. One of these might have been a shot but he still had a good half. The Whitecaps needed to get onto those Caicedo crosses.

Russell Teibert was noticeable in a good way and he was passing forwards! Yes, this is real life. You’re not dreaming. This was like seeing the sun in Vancouver the past few months. You want it to happen but it doesn’t come often. Teibert passed forward multiple times and got the Whitecaps some time in the box.

Ryan Raposo looked solid in his first start of the season and he was making good runs and displayed good ball control in the box.

Tristan Blackmon, Ranko Vesilinovic and Jake Nerwinksi were quietly good in front of Thomas Hasal. The best defensive play was Vesilinovic tracking back on a KC counter early. The defenders did a good job of holding down Daniel Salloi and Johnny Russell.

Overall, the Whitecaps came out with energy and a high work ethic. You could feel a goal was coming. Possession was even between both teams but the Caps looked like the better team.

The Whitecaps tried to continue their first-half pressure with a Gauld header which was saved by Melia. Melia took his time with the goal kicks that’s for sure much to the chagrin of the fans in attendance.

Sporting Kansas City seemed to adapt to the Whitecaps’ play with a wide diamond for more attack. The attack did come for SKC. They were starting to control possession and they were crossing and trying to get a lot of shots.

Fortunately, Hasal was up to the task despite not getting a busy first half. Hasal’s best save was around the 70th minute (I think) was on Salloi.

The defending was very good, especially in the box as Vesilinovic, Blackmon and Nerwinski were making simple but effective defensive plays and managed to clear the ball as quickly as possible.

The breakthrough came in the 73rd minute when Raposo got on a loose ball and put it past Melia. That was the Whitecaps’ first goal at BC Place this season and Raposo’s first ever senior goal. That came in his first start of the season. Not bad.

Before and after the goal, there were some decent changes which included a Teibert screamer that just went wide. Could you imagine if he scored a screamer against SKC two years in a row? He didn’t unfortunately and maybe the simulation programmers had other ideas.

White and Gauld were eventually subbed off and they did well. Hopefully, they can play a full 90 minutes next week as they are not fully fit yet.

Lucas Cavallini continued to display his strength and dribbling and that included great ball control to keep the ball in which got the crowd on their feet. He did get a yellow card three minutes after being subbed on, however. That was inevitable.

Sporting KC continued to press in the final ten minutes and the defenders continued to make smart plays. While Vancouver did get chances of their own in the second half, KC really looked threatening but the Whitecaps managed to bend but not break as the old saying goes.

There was a scary incident in stoppage time when Blackmon collided with Vesilinovic and ended up bleeding in the head. He did manage to get up (and saluted the fans) and got subbed off for concussion protocol. No updates on his status at the time of this writing. Blackmon won 14 duels and that was second on the Whitecaps behind Teibert’s 15.

The goal was big for Raposo and the Whitecaps and they managed to hold off a very good Sporting Kansas City team in Hasal’s second clean sheet of the season.

The team got to sing Stand by Me with their fans but not before a streaker ran the pitch.

Sartini described the win as very good and maybe he should keep the blazer in the future. He also told us it was his wife who told him to wear it. So you can thank Mrs. Sartini.

“We need to be the team who dominates the game,” said the Whitecaps coach on the team’s play. “We are not a team that can sit back and pass.”

He also spoke about Raposo in his first MLS start.

“He was feeling left out and I told him to work out because you’re so versatile…he worked his (you know what) off,” said Sartini. “I’m very happy he scored.”

Raposo mentioned that Sartini told him he was starting on Thursday and as a result, texted his mom (who is a cardiologist in Hamilton that he was starting and she drove from Hamilton to Toronto and hopped on a plane to Abbotsford where he picked her up. Raposo also mentioned that he thought of her and pointed to her when he scored. It was a surreal feeling for the 23-year-old.

“I kind of blacked out,” he said. “I don’t know what happened until I sat down.”

Our own Nathan Durec asked Teibert about how the club has a sense of family with the Whitecaps. He mentioned that it has been a different family since he joined the club in its inaugural season in 2011 b bringing up former leaders such as Jay Demerit, Nigel Reo-Coker and Pedro Morales. Now the captain himself, Teibert is leading a new family.

“There has always been a sense of family in this club,” said Teibert.

The Whitecaps play the Portland Timbers next Saturday at BC Place. It’s the Cascadia Match of the season and kickoff is at 7:00 PM.