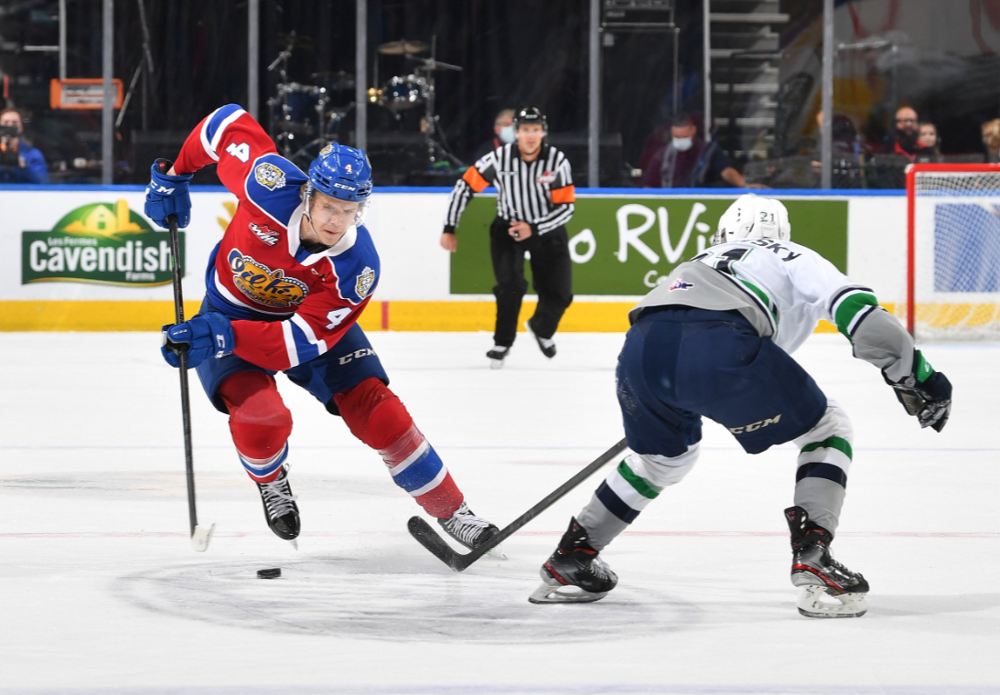 Eyes have been on Kaiden Guhle since his start in the Western Hockey League, especially with his performance during the 2021-2022 season. Named WHL Playoff MVP, Guhle has been more than impressive during his time with the Edmonton Oil Kings.

Guhle began his WHL career when he was selected first overall by the Prince Albert Raiders in 2017, signing with them that same year. His first full season with the Raiders was an impressive one, and the team went on to win the 2019 Ed Chynoweth Cup.

Early in his career, Guhle was recognized as a playmaker and someone to keep an eye on with or without the puck. He was everything the Edmonton Oil Kings were looking for: defensive, strong on the power play, and a force to be reckoned with on the penalty kill. In his regular season with the Oil Kings, he had 25 points in 25 games, with 5 goals and 20 assists. As the end of the regular season was nearing, Guhle was nominated for WHL Defenseman of the Year, being recognized for the Central Division.

While an unfortunate injury prohibited him to play the last month of the regular season,  he came back strong for playoffs. The Oil Kings went on to sweep the Lethbridge Hurricanes 4-0, Guhle scoring 2 goals and 3 assists in the four games. He recorded 1 goal and 3 assists in the sweep against the Red Deer Rebels, and then the Oil Kings were off to the Eastern Conference Final against the Winnipeg ICE.

The Eastern Conference Final was a tough battle fought, but Guhle helped lead his team to a 4-1 win in five games, posting five points and scoring 2 goals and an assist in game 5.

To no one’s surprise, the Montreal Canadiens prospect was a key component in the WHL final against the Seattle Thunderbirds. The Oil Kings won over the Thunderbirds 4-2, Guhle scoring the game-winner in game 6, his eighth goal of the playoffs. With that goal, Guhle set a team record for most goals by a defenseman in a single postseason.

Following the game and the Edmonton Oil Kings being named WHL Champions, Guhle was announced to be the WHL Playoffs MVP, the first defenseman to win the title since former Oil King Griffin Reinhart eight years ago. He is the third Oil King to win, after Reinhart and goaltender Laurent Brossoit in 2012.

Overall, Guhle had 16 points in the 19 Oil Kings playoffs games, and eight of those were goals. No matter which team you root for, he’s an incredible player to watch, and we all know the WHL Playoffs MVP is just getting started.