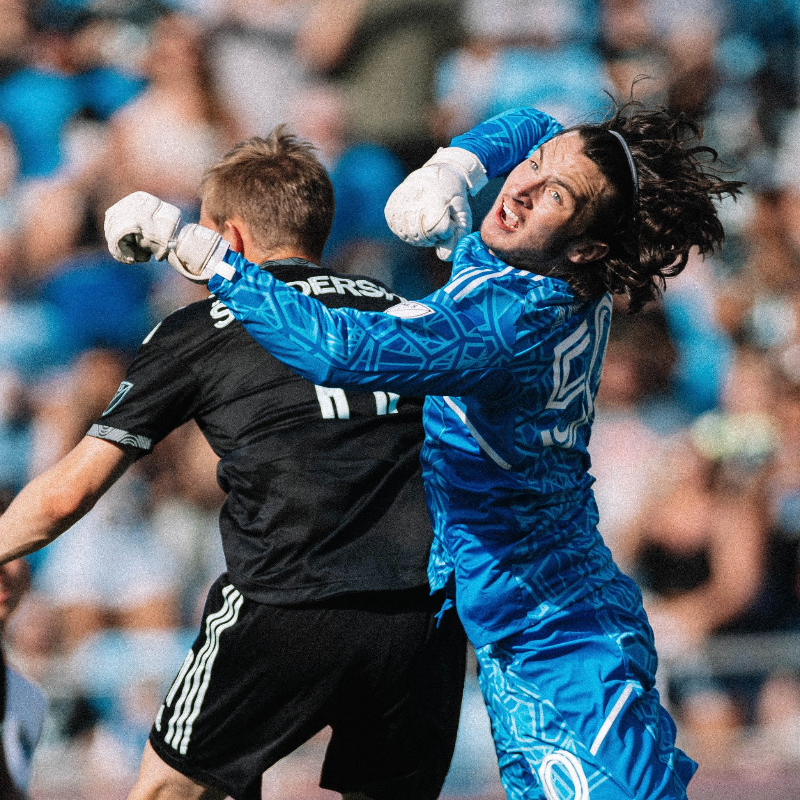 The Vancouver Whitecaps headed to Charlotte to face a team they had never played before. They were looking for their first points on the road as well as they began a three-match road trip.

Vanni Sartini’s boys believed there was an opportunity here. Charlotte is the newest MLS club, only in their first season, and they wanted to take advantage on a team without a history as of yet.

It’s a lineup that MacGyver would be proud of, held together with bailing wire and duct tape.

Max Anchor, who just signed a pro contract a couple days ago, got the nod in net. It’s been an interesting time in goal for the Whitecaps with Thomas Hasal injured and Cody Cropper and Isaac Boehmer both on health and safety protocol.

The ‘Caps also signed York United FC player Niko Giantsopoulc to a four-day deal under the emergency keeper protocol of MLS, but he’s on the bench to start.

The back line saw Ranko Veselinovic and Florian Jungwirth keep their spots. Javain Brown joined them at right centre back.

The midfield was interesting in that there was no Russell Teibert to be found. Instead, Sebastian Berhalter was paired with Leonard Owusu, who had a good match midweek, coming on from the bench. He helped change the tempo of the match against FC Dallas and looked to do the same in Charlotte.

Marcus Godinho and Cristian Dajome took the wing back roles, positions both have played this year. It’s not the favourite for either player, but Sartini had chosen a back 3 to begin the match.

Ryan Gauld slotted back into the lineup after time in health and safety protocol, joined by Deiber Caicedo.

Tosaint Ricketts got his first start up top. Lucas Cavallini was sitting due to a yellow card accumulation suspension, and Brian White was added to health and safety protocol a couple hours before the match.

Looking at this lineup, I expected Godinho to drop back in the defensive phase of the game to make a back 4, reminiscent of Sartini’s beginning-to-be-infamous back 3½. I also expected Brown to push up at times, letting Dajome cut in for the overlap.

Owusu deserved his start and Teibert needed a break. The captain has played the most minutes of any Whitecap this year. He also needed to sit because…well…he just needs to sit.

But my eyes were set to watch three players. Anchor in net is a huge test. He’s well-respected for his play on Whitecaps 2.

Ricketts deserves a start up top. He’s become a bit of a supersub in recent years, but giving the Canadian veteran a start here with so many issues in suspensions and injuries just makes sense.

Finally, Luis Martins started on the bench today. It’s his first time suiting up for the Blue-and-White, and he’d want to make a good impression on the fans if he got on the pitch.

I guess we had to expect something explosive from Ricketts. He’s used to coming on late and not having many minutes to get things done.

But that’s exactly what he did, scoring in the second minute to put the ‘Caps up early.

It was not to last though as Andre Shinyashiki got his head on a nice cross over the top of Dajome in the 8’.

It took a good 15’ for the Whitecaps to settle into the match. When they did, it was roughly 8-9 men behind the ball as the whole team worked hard to give their younger keeper all the support they could muster.

They were happy to give Charlotte the bulk of possession. After a frenetic opening, they were not able to do much with the ball. Most chances in the latter part of the half were from far out.

Others were high crosses. Brown excelled in clearing these to safety, registering at least four aerial clearances to help out Anchor.

The goalkeeper was also helped out by Jungwirth, who was on goal kick duty. Anchor was a gametime decision as he was nursing a quad issue. He was deemed fit to play, albeit with centre-back help in kicks.

The ‘Caps had their chances as well after Ricketts’s goal, but they were few and far between. Their crosses were being picked off as well by the Charlotte defence.

At the half, the teams walked to the dressing rooms on a goal apiece. They would be looking to try for openings in the second.

If the beginning of the first half was fast and nervy, the second was the exact opposite.

There was little to discuss in the first 15’ of the second. Both teams seemed content to hold their respective possession out wide, with slow movement on the ball.

Gauld did take a rather audacious shot over the net. From about 20 yards out, his ball sailed over, but not by much.

Things did take a bit of a jump in the 66’. Anchor was forced into a shoulder save from a run on the left by Charlotte. But he stayed large in the net, using his 6’2” body to block the shot.

Veselinovic had another quietly good match in the centre of the back line for the first 80’. But he fell asleep in the 86’, letting Daniel Rios come in behind him. Ranko let the ball go by and Rios made no mistake for the go-ahead goal.

Teibert had a last-gasp effort from the top of the 18-yard box, but it went into the safe hands of the goalkeeper.

It was a tough beat for the Whitecaps, one that on the day, they perhaps did not deserve. A tie would have been an acceptable outcome for both sides before the final goal.

But this leaves the ‘Caps as the only club without a point at all on the road. They fall to 0W-6L-0D  away from BC Place.

A visibly pained Sartini said that the team “didn’t deserve to lose.”

“We fought against a lot of obstacles in this game, a lot of players out because of COVID, two goalkeepers out and everything,” he said.

But the head coach still felt the match was good, especially the second half.

He had plenty of admiration for his young goalkeeper, Anchor, who completed his debut.

“I think Max was amazing,” he said. “He was terrific. It’s really a pity that we conceded the second goal because…I think he was very good.

For his part, Anchor said he did not have the words to express what this match meant to him.

“The last 90 minutes and my first game, it was unbelievable,” he said.

Ricketts, the veteran on the club, had a lot of supporting words for his keeper as well.

“I said great job, just enjoy the moment. You’re 17. You’re starting in a game on the big stage in front of a great crowd. Just enjoy it and be yourself. And we’re so proud of him,” the striker said.

I asked him what he remembered of his first few matches when he was young.

“I just remember the nerves going into a game like that,” he reminisced. “But he [Anchor] held his own. He did well. He had some big saves.”

The Whitecaps have no rest as they head off to Calgary to face Cavalry FC in the Canadian Championship. Kickoff is at 6 p.m. at ATCO Field on Wednesday.