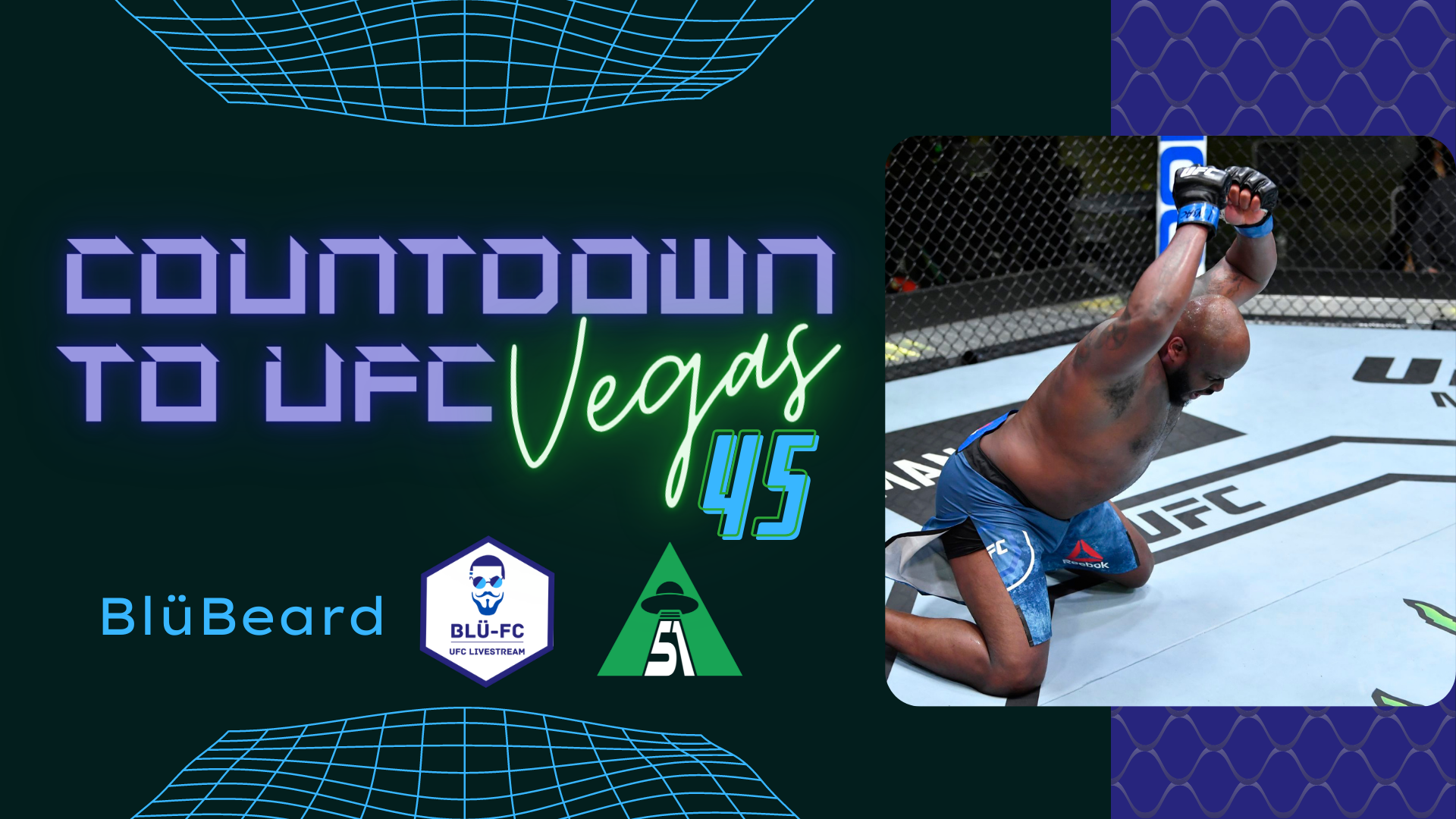 In the final card of the year, two HUGE, dangerous, power-punching heavyweights are set to square off as Derrick Lewis, fresh off his loss in the interim title bout, meets the rising contender Chris Daukaus. Before that, we’re set to see the return of ‘Wonderboy’, Stephen Thompson, as he squares off with Belal Muhammad. Some other exciting matchups include a couple of thrilling women’s matchups between Amanda Lemos and Angela Hill in the main card and Raquel Pennington and Macy Chiasson in the prelims. We’ve also got the return of Cub Swanson, Darren Elkins and one of the most entertaining Canadians on the roster: Charles ‘Air’ Jourdain. All of these matchups (plus more) are covered below and features BLÜ’s predictions along with the Bet99 Sportsbook Odds.

The main card opens up with two UFC legends clashing in the featherweight division. Elkins started his UFC career all the way back in 2010. He’s had a lot of success since then but went through a 4 fight losing streak from 2018-2020 which just recently ended with 2 wins in the past 13 months. Swanson was actually part of the WEC before it merged with the UFC and fought there since 2007. He’s also had a lot of success, but just like Elkins, he found himself on a 4 fight losing streak that ended with a couple wins. Sadly, he lost his last one out to Giga Chikadze after getting a nasty kick to the body a minute into the fight.

This is a tough one to choose since they’ve both got the same experience, a similar record, similar age and similar reach. The only thing that seems certain is that this fight will be full of fireworks. I’m a fan of Cub, but because Elkins is on that 2 fight win streak and his last one was to Minner (who we saw last week), I’m giving a slight edge to Elkins.

In this thrilling lightweight matchup, an exciting new contender, Gamrot, is making an attempt to crack into the lightweight rankings against the number 12 ranked Ferreira. Diego may be on a 2 fight losing streak, but those were to other top contenders Gillespie and Dariush; before that he had a 6 fight win streak including one over Anthony Pettis. Gamrot, however, is on his way up with only 1 loss in his career: his opening bout in the UFC which he lost by split decision. Since then he’s won two; both were early finishes, including a 1st round win over Jeremy Stephens.

You can’t underestimate a ranked fighter like Ferreira, but there seems to be a lot of momentum going towards Gamrot. Just like the fight before this, this is set up to be quite the entertaining matchup. Because of his recent record, I’m going to side with Gamrot. We’ll likely see a decision here, but because Gamrot has finished his last two opponents, we could certainly see a finish here.

After his 3rd loss in a row, Assuncao sits in 12th in the bantamweight division. Meanwhile, Simon is on a 3 fight win streak, his last one being a decision win over Brian Kelleher earlier this year. Don’t let their recent records fool you; these two fighters are very evenly matched. Assuncao’s 3 losses were to top bantamweight contenders Moraes, Sandhagen and, most recently, Cody Garbrandt; remember, bantamweight is the most stacked division in the UFC right now.

All that being said, when one man is 3 fights up and the other is 3 fights down, you’ve probably gotta give the edge to the guy on the win streak. This, plus the fact that Simon is 10 years younger and has a slightly longer reach, leads me to believe that Simon has an edge in this matchup.

In the final women’s bout of the night we’ve got the return of another veteran: Angela Hill. Currently, she’s ranked 12th while Lemos is number 11. Although they’re ranked closely, this matchup doesn’t seem to be all that close. Hill has had a rough time recently with 3 decision losses in 4 fights; two of those really could have gone either way. Those losses were to the Karate Hottie (Waterson), Gadelha and Torres. On the other side you’ve got Amanda Lemos who’s sitting at 10-1-1 with 3 first round finishes in her last 4 fights.

Although that all very clearly favours Lemos, I believe Hill is strong enough that she won’t be finished as easily as Lemos’ other recent opponents. I’m seeing a possible late finish for Lemos or, more likely, a decision win.

Yet another UFC legend is set to return tonight as Wonderboy himself, the 5th ranked Stephen Thompson, will face number 10, Belal Muhammad. His last time out, Wonderboy had a perplexing loss to Gilbert Burns. Normally we see him bouncing all over the octagon with an incredible display of striking. He seemed to just have an off night last time out. It was one of those fights where Burns didn’t necessarily WIN the fight, Thompson just lost it by not bringing it. As for Belal, he’s on a 5 fight win streak… kind of. Two fights ago he was losing to Edwards but was eye-poked so bad that the fight was stopped and ruled a ‘no contest’. After that he won a decision win over the legendary Demian Maia. It should also be noted that Thompson carries in a small edge in reach; this helps a lot being that he’s a striker facing a grappler.

If we see vintage Wonderboy in this fight, I believe we’ll see a convincing decision win for Thompson here. Belal’s clear advantage lies in grappling and taking the fight to the ground; this has been historically difficult to do against Thompson. I think we’ll see Wonderboy come back strong with another decision win.

In this explosive main event we’re seeing two HUGE, power-punching heavyweights. The Black Beast, Derrick Lewis is fresh off his loss to the interim champ, Gane, while Daukaus is on a 5 fight win streak with 4 first round KOs and 1 in the second round.

There’s absolutely no secret or surprise to what the strategy is for both men here; land a big punch to get a highlight KO. When you see that, you can pretty much only look at their physical stats. Lewis is always on the edge of the weight limit at 265 pounds while Daukaus is frequently under. Lewis also has a slight edge in reach. Also, Lewis has a pretty good chin so I think he’ll be able to stand up to Daukaus’ power a little bit better than Chris will for him. Again, you’ve gotta remember that this is dead even and one of these men is almost guaranteed to get KO’d, especially considering this a 5 round fight.

This one’s early in the prelims but it features two of the top women in the bantamweight division. The veteran Raquel Pennington is currently ranked 8th while the up-and-coming talent, Macy Chiasson, sits in 10th. Pennington has been in the UFC since all the way back in 2013. Since then she’s fought Holm twice, Andrade twice, Tate, de Randamie and Nunes. Those ones make up all of her losses BUT they were all decisions (except a 5th round loss to Nunes). As for Chiasson, she’s spent almost her entire career in the UFC since she got here in 2018. She’s only lost once (to Lina Lansberg), but her only fairly high profile win was in her last fight against Marion Reneau.

In terms of experience, the obvious choice is Pennington, but Chiasson has a lot going for her. The one difference that certainly favours Chiasson is her reach; she has an almost 5 inch reach advantage. I’ve flipped back and forth on this one; it’s that close. In the end, Pennington doesn’t tend to do well against lengthy strikers. I think that could be the difference, plus the momentum right now is certainly favouring Chiasson. Always keep in mind though that Pennington has a wealth of experience.

Finally, we’ve got an exciting Canadian on the card! He’s had a bit of an iffy record recently with a 2-2-1 record in his last 5 outings in the UFC, but each time he fights he looks amazing. He’s quick, powerful and creative with his striking. As for Ewell, he’s also a bit iffy with a 2-3 record in his last 5. There’s one significant difference and that’s Ewell’s substantial 6 inch reach advantage.

I’m conflicted on this one. I want Jourdain to win, he’s the favourite to win…but there’s something telling me he’s going to lose again. Maybe it’s because he’s had terrible luck, maybe it’s Ewell’s reach advantage, but I think Ewell is going to edge ahead in a decision.

We’ve got another exciting women’s matchup here with the experienced Eubanks and the newcomer Gatto. Eubanks has a bit of a questionable record in the UFC sitting at 5-4, but all of her fights have ended by decision. Also, all of her losses have been to top contenders Ladd, Correia, Vieira and Kianzad. Gatto, on the other hand, is new to the UFC with a win just a few months ago in her debut.

On paper, this matchup likely favours Eubanks thanks to all that experience. But since she’s lost to the top contenders on their way up, we have to consider whether or not Gatto has the potential to be a top contender soon. Since she’s undefeated at 6-0-2, she broke the arm of her last opponent, she’s got a slight edge in reach and she’s 11 years younger. I have to give the edge to Gatto getting a decision win on her journey up the rankings.

Here I highlight some betting lines that you might want to take advantage of for UFC Vegas 45. These are odds that favour the bettor. Although some of them may conflict with my picks, they offer a fair reward for a slight bit of risk.

The Underdog Macy Chiasson at +142

This fight is a lot closer than the odds make it out to be. Already, as a bettor, that makes this betting line more interesting. The difference-maker here is that Pennington doesn’t do well against lengthy strikers. Being that Chiasson has a 5 inch reach advantage and she’s got an edge in momentum with her recent record, I’d say she has a bit of an edge over Pennington in this matchup.

The Underdog Derrick Lewis at +116

I think the only reason we’re seeing Lewis as an underdog is because Gane completely dominated him. That’s not a fair comparison at all; Gane is easily one of the most skilled heavyweights in the history of the UFC and Daukaus is a fairly inexperienced fighter so far. Let’s not forget that one was also a title fight. Lewis may be a fairly one-dimensional fighter, but he has the power to back it up against most fighters. This fight could go either way, but there’s a lot of value here considering he just had a title shot.

Usually when you’ve got two experienced power-punching heavyweights lined up, the first round is a stalemate; neither man wants to make the first move. The second round is usually when the action heats up. It’s also fairly well known that Lewis is more of a counter-puncher; he knocks people out after they make the first move. Finally, Lewis can take quite a beating, so, if Daukaus lands a couple, Lewis will likely be fine. All of those factors combined tells me that this fight is most likely going to make it at least until the end of the 2nd, likely the 3rd round.